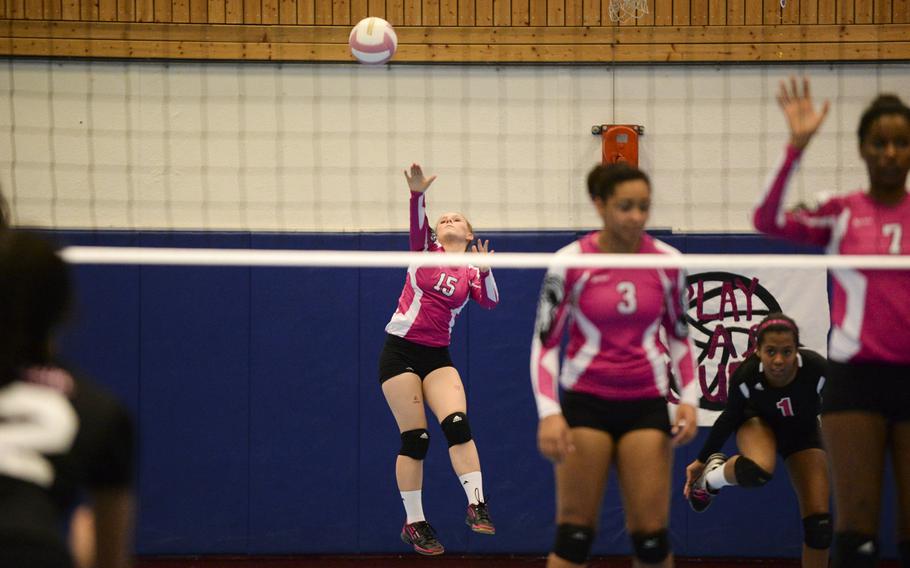 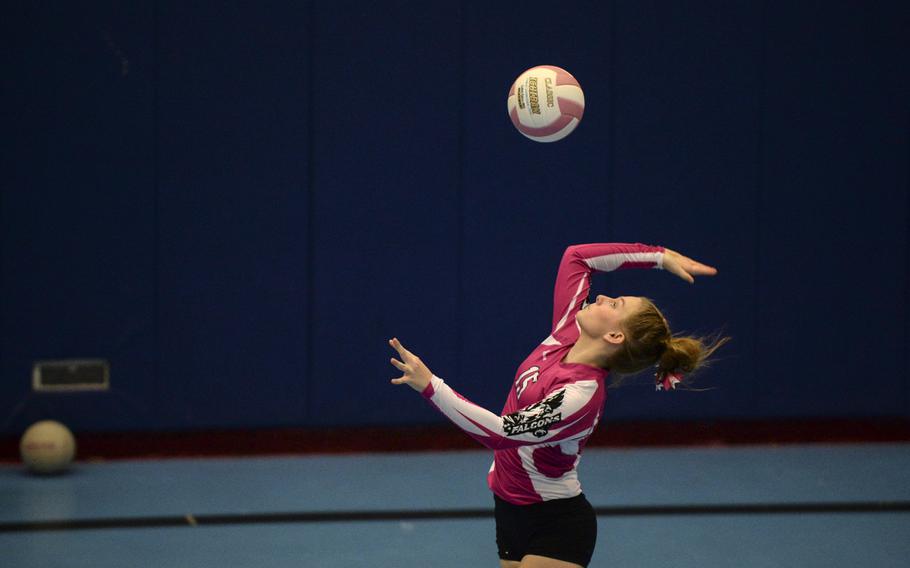 From the alley-oop to the curveball to the football reverse, there are some maneuvers in sports that carry a risk as high as their potential reward. Many DODDS-Europe girls volleyball coaches are currently pondering such a dilemma of their own: the jump serve.

In a basic volleyball serve, the serving player simply strikes the ball, overhanded or underhanded, from a standing position. A player performing a jump serve tosses the ball high into the air, leaps forward and hits the ball midair with far greater force than is produced by a simple standing serve.

Executed properly, the jump serve can put enormous pressure on the returning team. Its speed and unpredictability can make it difficult for an opponent to field the initial serve and turn it into a productive three-hit response. But the heightened degree of difficulty for the jump server increases the possibility that the serve will sail into the net or out of bounds, handing a point and serve to the opponent.

“Getting the serve in play is generally the biggest indicator of success,” Swenty said. “Most coaches at the high school level are not willing to accept the higher level of errors that will invariably come with this style of play.”

Swenty is not one of those coaches. His Falcons are among DODDS-Europe’s most prolific and effective jump-serving teams, and the team devotes “extensive practice time” to perfecting it.

It’s paid off nicely this season. The Falcons improved to 6-2 with a pair of victories Saturday, including a straight-set sweep of three-time defending champion Ramstein. That win featured a combined nine aces by Kaylee Luginbuhl and Cassie Bell, a statistic that doesn’t adequately measure the pressure Vilseck’s spot-on service game applied to the Royals.

“The risk for us is worth the reward,” Swenty said. “But it is not for everyone.”

An informal survey of other DODDS-Europe coaches suggests that few stress the serve as fervently as Swenty.

“Teaching jump serving is not an easy task,” Ramstein coach Erin Markus said. “But if done right can be very effective.”

“I encourage the players to use whatever serve they can get over effectively and consistently,” Velsvaag said.

“Most of the girls pick it up on their own, and we just tweak it during the season,” Velsvaag said, citing Leah Rojas, Ellen Tafoya and Adriana Ibanez as Warriors who have developed an effective jump serve. “As they become more proficient you will see it more during games.”

Velsvaag said she reserves the right to simplify a player’s service technique if they don’t demonstrate mastery.

“If they are not consistent, we shut it down and have them change back to whatever gets over the net,” she said.

Julia Byler, coach of 2013 Division II champion and new Division I contender Naples, applies similar standards to her team. She doesn’t spend practice time on the jump serve, preferring to emphasize “serve placement and accuracy.” But the opportunity is there for her players.

“They have to show us in practice that they can do five jump serves in a row before we allow them the green light in a game,” Byler said.

Byler said standout Wildcats Jessica Wheeler and Sierra Dye have developed “great” jump serves that they deploy in live matches. But they’re the exception, she said.

“Most players at this level do not have the coordination to do a jump serve,” Byler said.

“We have girls that come to us as freshmen and sophomores who have never played,” Clemmons said. “It’s just not the same.”

But Swenty isn’t alone in spending practice time on the jump serve. Patch coach Mike Rubino said he teaches the maneuver in practice in hopes that it will eventually turn into a serviceable in-game weapon. He cites current Panther star Emily Ortwein and her 31 aces through Saturday as an example. But he admits that it doesn’t happen frequently.

“It’s not often that a coach finds a player able to learn, perform and be consistent with a jump serve in our short season,” Rubino said.

While the jump serve is a staple of higher-level women’s volleyball, factors like those mentioned above have prevented it from widespread DODDS-Europe adoption. Until it catches on fully, Swenty’s Falcons will look to press their advantage.

“We try to create an environment of aggressive play,” Swenty said. “And the jump serve really helps promote that.”