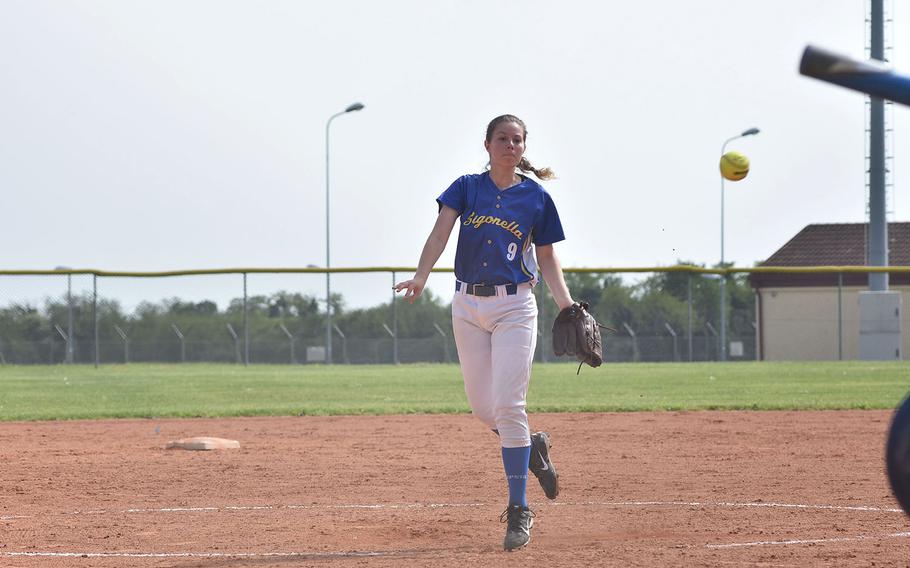 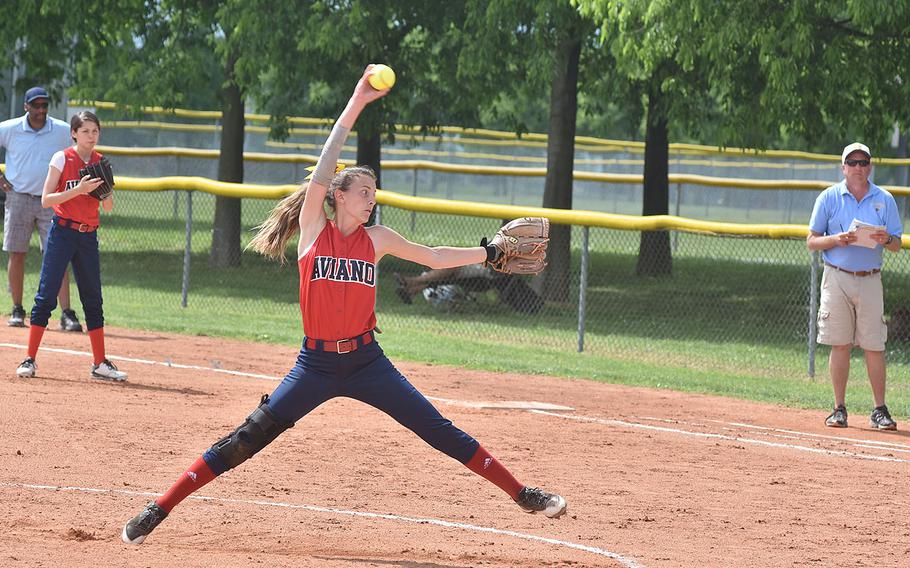 Buy Photo
Aviano's Lizzy Bond extends fully while maknig a pitch toward home on Saturday, April 28, 2018 in the Saints' 7-6 loss to Sigonella. (Kent Harris/Stars and Stripes) Buy Photo
Sigonella's Jessica Jacobs tosses the ball toward home while throwing a no-hitter against Hohenfels on Saturday, April 28, 2018. The Jaguars won 10-0. (Kent Harris/Stars and Stripes)

AVIANO AIR BASE, Italy – Due to a revamped schedule this season, just about every small school softball team will have played against each other before the European championships begin.

That’s never happened before, and coaches and players appear to like the increased chances to test the competition.

The bad news for the Sigonella Jaguars? Jessica Jacobs won’t be a surprise to anyone. The good news? It might not make a difference.

Jacobs, a junior who also starred in basketball for the European Division III champions, tossed a five-inning no-hitter at Hohenfels in a 10-0 victory on Saturday, then got the win in relief in a 7-6 triumph over Aviano after driving in the tying run. At the plate, she was 5 for 6 with a pair of triples, two runs and three RBI in the two games.

“And she can play anywhere,” said longtime coach Steve Larson, whose team improved to 11-1 on the season after winning four times in two days in Aviano.

Sigonella 10, Hohenfels 0: The Tigers, coming off a slugfest 19-18 loss to Rota, are certainly no weaklings at the plate. But they couldn’t solve Jacobs, who was perfect through three innings with eight strikeouts.

A dropped ball on a third strike allowed one Tiger to reach in the fourth. And another did the same in the fifth. But those were the only two Hohenfels base runners.

Jacobs starred at the plate as well, going 3 for 3.

Rota 19, Hohenfels 18: The first game of the day saw the most runs and the first of two comebacks for the Admirals.

Hohenfels scored nine times in the top of the fifth to take an 18-14 advantage, only to see Rota score five more in the bottom of the inning to win it as time expired.

Halee Mezzacapo, Aubrey Bruhn and Aliyih Jordan each had three hits for the Tigers, while Grace Lagger duplicated that feat for Rota and teammates Emma Bond, Carmen Desir and Nicole Coronado each had two.

Sigonella 7, Aviano 6: The Saints’ Lizzy Bond struck out eight Jaguars and was nearly matched by Hanna Zarum through three innings as the teams battled to a 4-4 tie. But after the Saints went up 6-4 on Jasmine Vasquez’s second run-scoring single, Jacobs came on to slam the door shut and the Jaguars rallied for one run in the fourth and two in the fifth – capped by Averi Chandler scoring on a ground ball from Bree Dignan – to end it.

Sigonella might have the advantage on most of its foes as it has two solid pitchers to send to the mound. Zarum struck out 11 Hohenfels batters on Friday. The Jaguars would be in even better shape had they not lost Hannah Davis to a leg injury a weekend earlier.

The Admirals trailed 5-0 before recording an out and 8-7 after two innings. Most of both teams’ runs were the result of walks, passed balls, wild pitches and Keystone Kops-style throws around the bases.

But Rota started hitting the ball in the third and scored 10 times with two outs. Desir, Savannah Matteson and Coronado each had two-run singles in the inning.