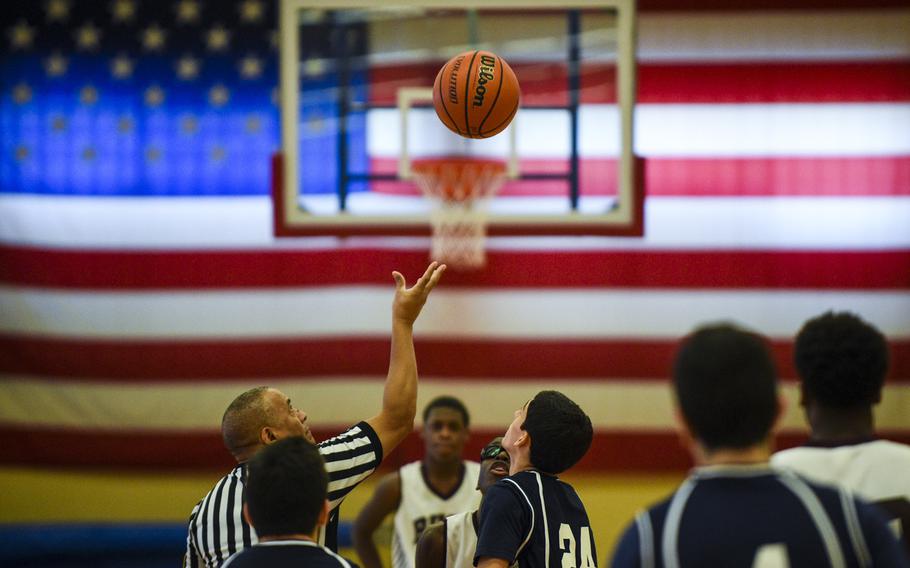 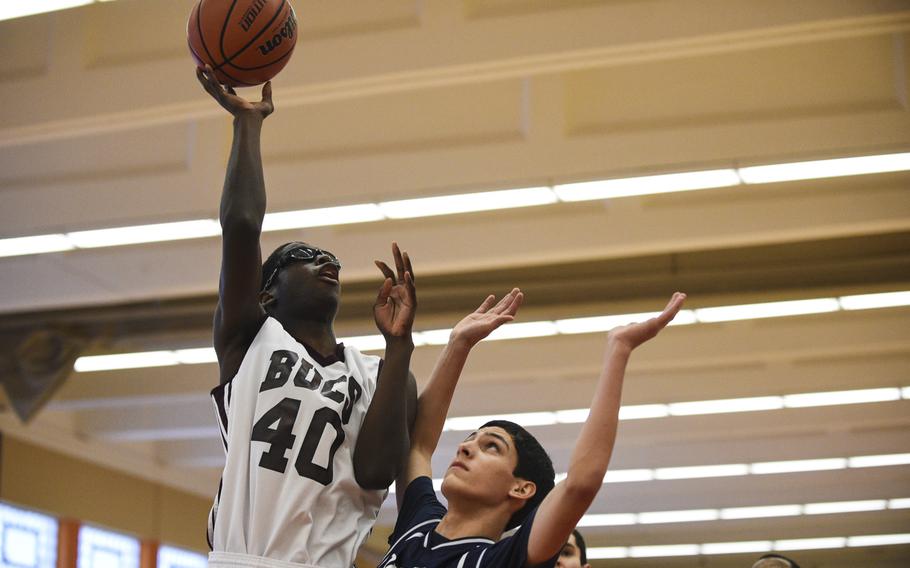 Baumholder's Jeff Pierre takes the ball up for a short jumper over Bitburg's Micah Getty on Saturday, Jan. 31, 2015 at Baumholder, Germany. (Joshua L. DeMotts/Stars and Stripes) 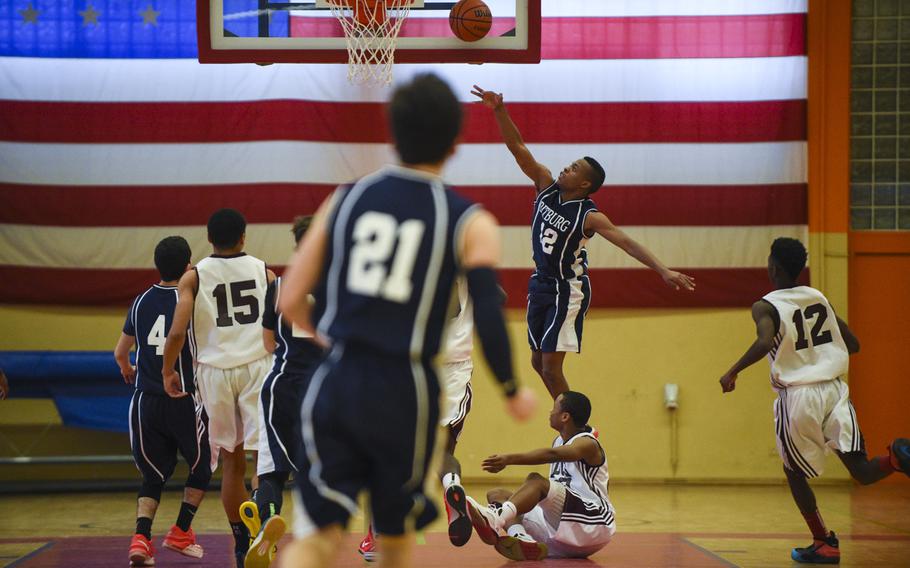 Bitburg's Curtiss Wilson lays the ball up against Baumholder on Saturday, Jan. 31, 2015 at Baumholder, Germany. (Joshua L. DeMotts/Stars and Stripes) 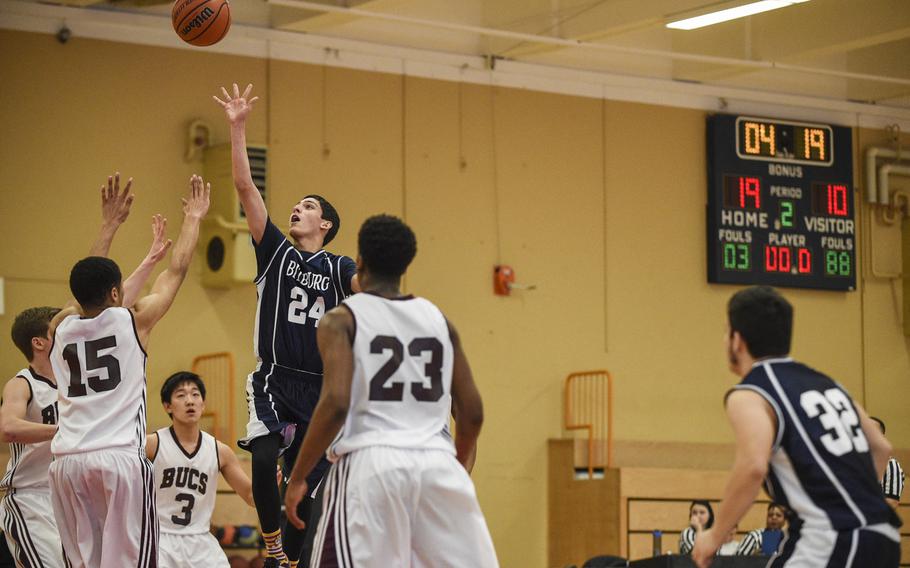 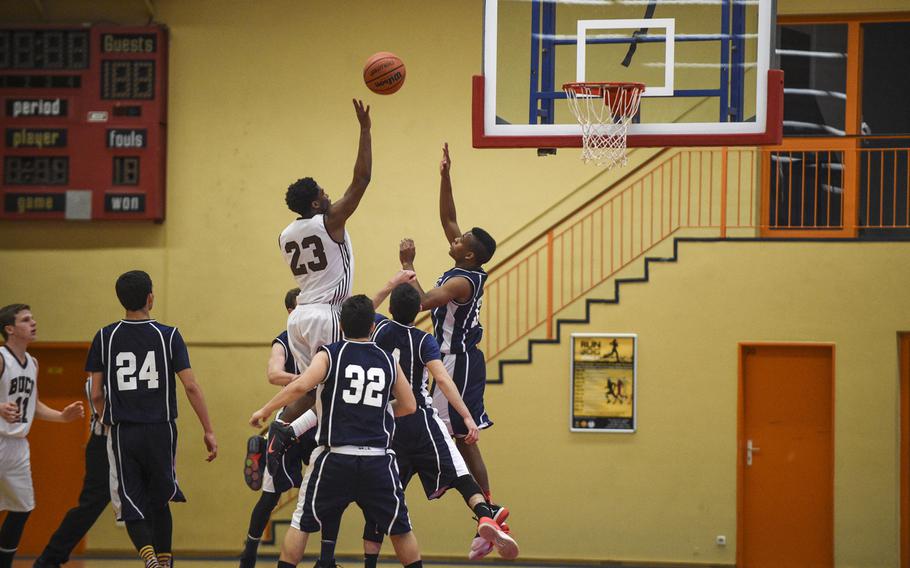 Baumholder's Kadarius Williams goes up for a floater over the Bitburg defense Saturday, Jan. 31, 2015 at Baumholder, Germany. (Joshua L. DeMotts/Stars and Stripes)

Ramstein won at home 56-44 on Friday, then finished the job at Wiesbaden on Saturday with a 68-29 blowout Friday at Ramstein, the Royals outscored the Warriors by 18 points in the second half to earn the win. T.J. Williams led a balanced Ramstein attack with 18 points, while teammate Jesse Gray added 11 points and eight rebounds.

Ramstein's dominance resumed immediately Saturday at Wiesbaden. The Royals led by nine after one quarter, stretched the advantage to 26 by halftime and pushed the game to running-clock territory by the end. Trey Bailey produced a 17-point, 15-rebound double-double to lead the Ramstein rout.

The Royals are rolling at 9-1, having avenged their lone loss of the season with a 44-39 defeat of Kaiserslautern on Tuesday.

But their next challenge is their greatest - a Friday night visit from defending Division I champion and undefeated frontrunner Patch.

Wiesbaden, which played in the Division I European championship game last winter, falls to an even 6-6, with all of those losses coming over the last three weekends at the hands of Patch, Division II program BFA and now the rival Royals.

Sophomore guard Otis Reale was again prolific, scoring 31 points on Friday and 32 on Saturday. The Falcons needed every one of them to hold off the Cougars. The Cougars launched concerted comeback efforts in the fourth quarter of each game before coming up a possession short each time.

Randall Bagtas scored a combined 36 points on the weekend to lead the Cougars, who moved up to Division I prior to the season.

BFA, riding high from the previous weekend's stunning sweep of Division I Wiesbaden, took the Friday opener behind a 16-9 second-quarter run. Kaden Proctor scored 17 points and Jonah Greathouse added 16 to ice the victory.

Both teams have shown a propensity for close games and break-even doubleheaders this season. BFA split a set with Hohenfels on Jan. 16 and 17, avoiding the sweep with a Saturday overtime win; Ansbach traded wins with Bitburg in early January.

Kadarius Williams had 18 points and nine rebounds and Jeff Pierre notched a 10-point, 14-rebound double-double for victorious Baumholder. The Buc defense was also formidable, holding Bitburg to two points in each of the second and third quarters.

Baumholder and Alconbury are the only teams in Division III with a winning overall record. The teams played a competitive set on Jan. 23-24, with Alconbury taking both by narrow margins, including an overtime decision.

Marcus Brown scored 12 points and Brandon Vigil added 11 for Aviano. The Saints made the outcome academic right away, outscoring Florence 23-5 in the first quarter to kick off the rout.

Aviano went undefeated in January, winning all five of its games. February holds doubleheaders against Sigonella and Vicenza, as well as the Division II European tournament.

Oliver Peterson led AFNORTH with 12 points Friday; Darel Marshall took the lead with 14 points for the Lions the next day.

Alconbury 40/41, SHAPE 37/31: At Mons, Belgium, the Dragons pulled off upsets on two different levels Friday and Saturday, beating a much larger opponent on that opponent's home court.

Early leads in both games helped Division III Alconbury pull off the impressive sweep of Division I SHAPE. Forrest Booker scored 14 points in each game and Pavel Karamshin and Joey Behr each scored a combined 18 points on the weekend to lead the Dragons. Karamshin added 23 combined rebounds.

Austin Stephens led SHAPE with 15 points Friday and 14 on Saturday.

Alconbury hasn't lost a game since the season's opening weekend, when it suffered a sweep against Lakenheath. The Dragons are a good bet to grow that streak to 10 when they wrap up their season Feb. 13-14 against winless Menwith Hill.