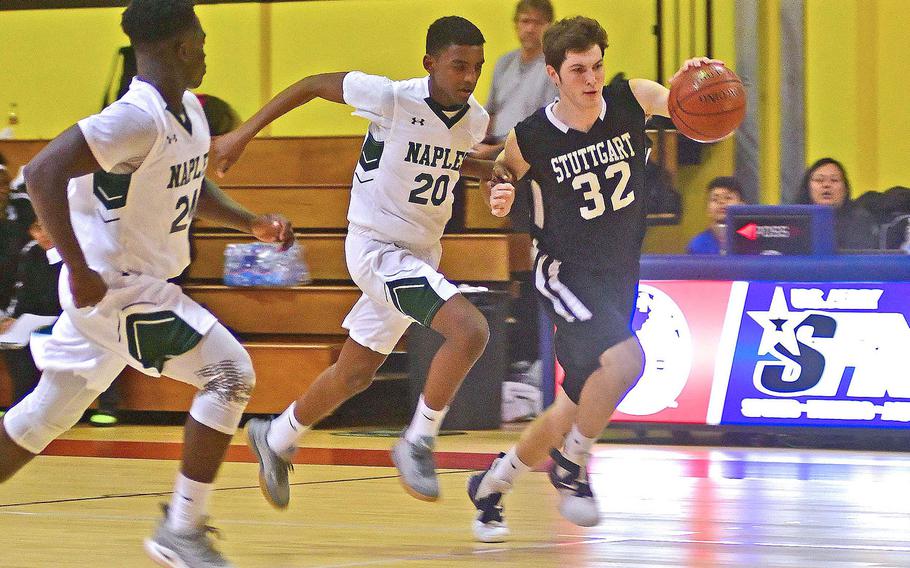 Buy Photo
Stuttgart's Logan Crouch tries to beat Naples' Biniam Stefanos and Ashton Jeanty, left, down the court in the Wildcats' 46-44 victory in December. DODEA-Europe sports gets underway again this weekend after the Christmas break. (Norman Llamas/Stars and Stripes)

Unaffected by the ongoing partial government shutdown, the DODEA-Europe winter sports season resumes this weekend after a month-long holiday hiatus.

The return to action includes full slate of events in boys and girls basketball, wrestling and marksmanship, and marks the beginning of the regular season’s stretch run to the fast-approaching European championships.

Boys basketballRather than ease back into the rhythms of the regular season, the DODEA-Europe boys hoops slate offers an immediate marquee matchup.

Reigning dynasty Ramstein looks to continue its Division I dominance at Vicenza, the only other team in the division to survive the 2018 portion of the season without a defeat. The 4-0 Cougars, coming off impressive wins over divisional rivals Vilseck and Stuttgart in December, host a 2-0 Royals squad that survived challenges from top Division I contenders Wiesbaden and Kaiserslautern before the break.

Girls basketballLike the Royal boys, the reigning Division I champion Stuttgart girls will face a formidable challenge fresh out of the holiday break.

The Panthers have crushed Division I opponents SHAPE, Naples and Vicenza en route to a 4-0 start, and will look to pick up that trail of destruction at Vilseck. The host Falcons bring a two-game winning streak into their upset bid.

The weekend opens a six-week run to the end of the regular season ahead of the European championship tournaments, set for Feb. 20-23 at Wiesbaden.

WrestlingCompetitive meets in Germany, England and Italy mark the end of the long holiday break for DODEA-Europe grapplers.

The German event is particularly loaded, with reigning dynasty Stuttgart and top contender Ramstein meeting on the mats for the third time this winter. That meet also includes three other Division I schools in SHAPE, Wiesbaden and host Kaiserslautern, along with solid small-school program Spangdahlem.

MarksmanshipStuttgart’s half-decade grip on the marksmanship title seemed like it might slip this winter as the Panthers lost the entirety of their 2017-18 championship roster. But Stuttgart has other ideas.

The new-look Panthers have posted very familiar-looking results so far, winning both of their December conference meets and posting a team score of 1,116 on Dec. 8 that stands as the best mark of any team this season.

This weekend’s pair of Eastern and Western conference meets starts a three-week run to the Feb. 2 European final, the first DODEA-Europe championship event of the 2019 calendar year.