Favorites run the table across the divisions 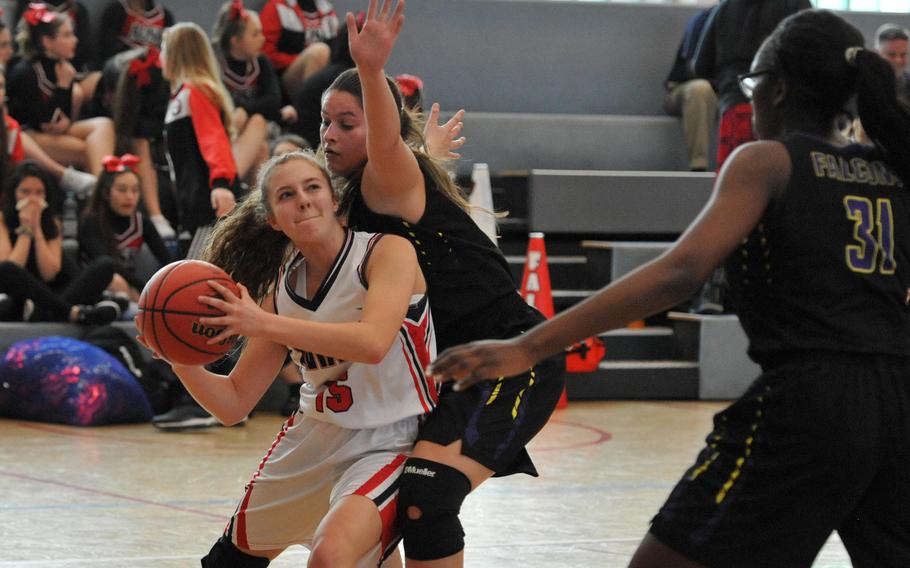 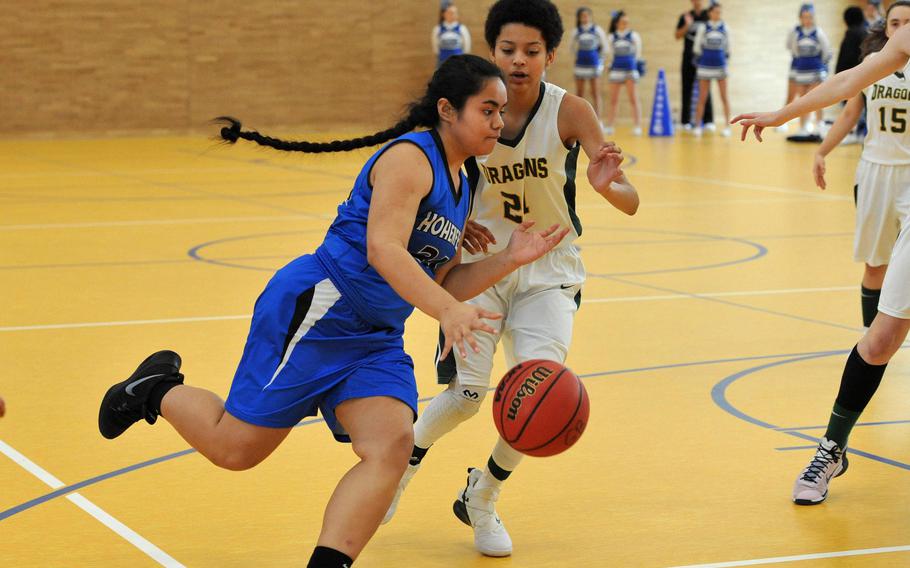 Alconbury' Kira Thorne scores with a jumper against Hohenfels in a Division III game at the DODEA-Europe basketball finals. Alconbury won 45-29. (MICHAEL ABRAMS/STARS AND STRIPES) 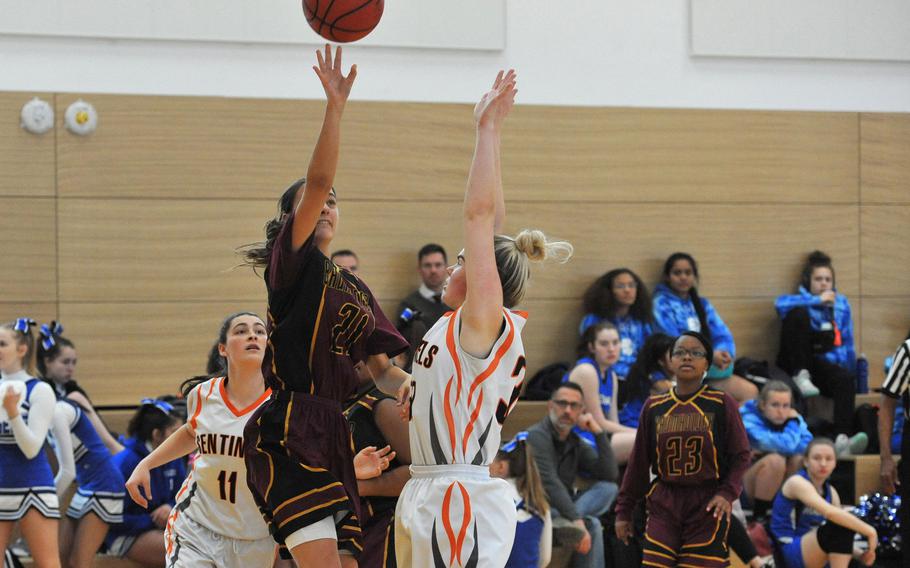 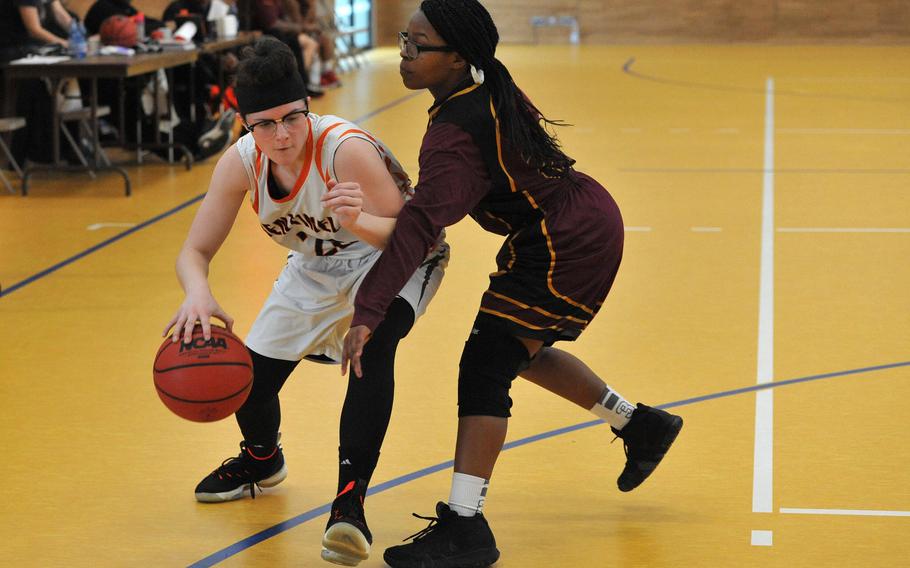 Spangdahlem's Lorelai Vargo tries to drive to the basket against Baumholder's Jasmine Dorsey in a Division III game at the DODEA-Europe basketball finals. Spangdahlem won a close game 32-31. (MICHAEL ABRAMS/STARS AND STRIPES) Stuttgart's Olivia Sullens tries to keep Wiesbaden's Madilyn Martinez from getting off a pass in a Division I game at the DODEA-Europe basketball finals. Stuttgart won 30-9. (MICHAEL ABRAMS/STARS AND STRIPES) Stuttgart's Victoria Antoine tries to go in for a basket against Wiesbaden's Savannah Benson-China, Daniella Marin and Catianna Binyard Turner, from left, in a Division I game at the DODEA-Europe basketball finals. Stuttgart won 30-9. (MICHAEL ABRAMS/STARS AND STRIPES) Ramstein's Alexis Tri shoots against the Vicenza defense of Brealin Redecker, left, and Emily Kearns in a Division I game at the DODEA-Europe basketball finals. The Royals won the game 51-3. (MICHAEL ABRAMS/STARS AND STRIPES) 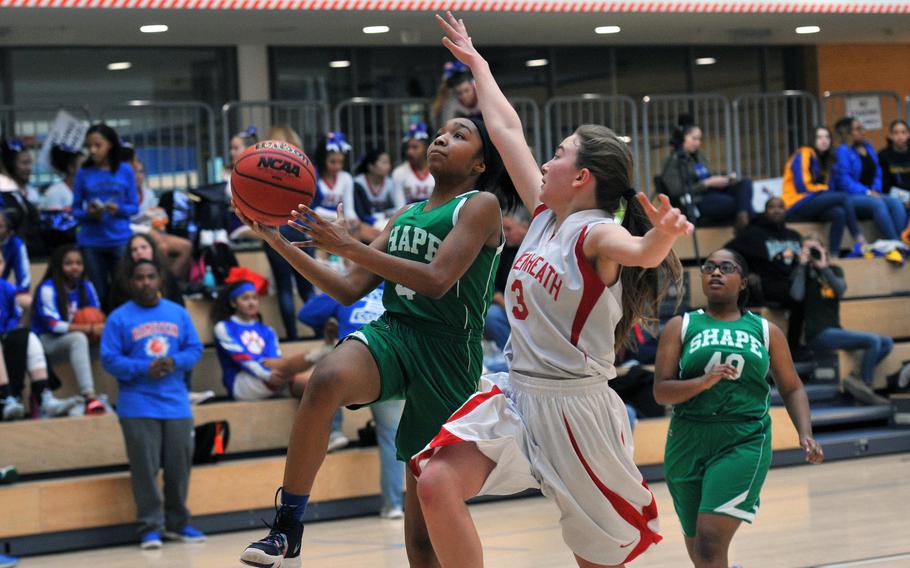 SHAPE's Maya Neal goes to the basket against Lakenheath's Catherine Oordt in a Division I game at the DODEA-Europe basketball finals. SHAPE won 42-31. (MICHAEL ABRAMS/STARS AND STRIPES)

WIESBADEN, Germany – There were very few surprises Wednesday as foes both familiar and unfamiliar battled for the right to advance in the DODEA-Europe girls basketball championships.

Top seed Stuttgart was the only team to advance in the Division I event, defeating a pair of teams it had already dispatched earlier this season.

Black Forest and AFNORTH, two teams that hadn’t played any Division II competition during the regular season, backed up their top seeds with victories. And Sigonella and Brussels both moved on in Division III with a pair of routs.

The rest of the semifinal spots are up for grabs Thursday. The fortunate teams square off Friday for the right to play for the three titles on Saturday.

Division IStuttgart sweeps: The top-seeded defending champs won twice, including once in a rematch of an earlier season showdown with a top contender.

The Panthers opened the tournament with a 30-8 victory over Wiesbaden, then topped Naples 25-17.

During both games, Stuttgart took the first two quarters slowly and used third-quarter rallies to pull away.

Naples 22. Vilseck 15: The Wildcats opened play by avenging an 18-16 loss earlier in the season to the Falcons.

The scoreboard operator wasn’t challenged in this one either, despite the Wildcats’ early attempts to push the pace.

“Sometimes we start off too fast and we need to slow it down, and when we do that helps us also,” Wildcat standout Roxanne Sasse said. “If we go too fast, we miss everything, so we mentally checked ourselves into slowing down.”

As the game continued, the speed difference was obvious on the court and Naples pulled away.

The Wildcats enter Thursday still in good shape and would advance with a victory over Wiesbaden.

SHAPE 42, Lakenheath 31: Two teams that entered the tournament as longshots – the No. 6 and 7 seeds – had one of the more competitive games.

Two of the strongest players for the Spartans were twin sisters Mackenzie and Madison Barden. Offensively, Madison is the stronger of the two and scored 22 points in the team’s only second win of the year against a D-I opponent.

“I loved the competition and I think we did really good for the most part,” Mackenzie Barden said. “We work on a lot of communication, basically being leaders of our team. We have to be able to communicate on the court, because our coach isn’t playing, we are.”

Lakenheath’s Sevaphina Raas was all over the court defensively and offensively and scored a third of her team’s points.

The Spartans lost their second game of the day, 44-5, to Kaiserslautern and face an uphill battle to advance to the semifinals. They’ll have to upset No. 3 seed Ramstein and hope for help. The Royals and Raiders both looked overpowering on Wednesday. Ramstein blasted Vicenza (51-3) and Lakenheath (54-14) and Kaiserslautern routed Vicenza (42-14). Each needs a win one of its final two games to move on.

Division IIAFNORTH 36, Marymount 20: The second-seeded Lions pounced on their first Division II opponent of the season in a win over the seventh-seeded Royals.

“We pressed early,” AFNORTH sophomore Ashley Bailey said. “That helped us to get the ball and a lot of easy turnovers for layups.”

The game was the long-deferred first divisional matchup of an unorthodox Lions season. AFNORTH played only Division I and III opposition in the regular season and had to wait until the late afternoon to tip off its only game of the tournament’s opening day. But rather than catch up on some divisional scouting, the Lions opted to focus on themselves in the hours before the tournament debut.

“We’ve been all in one hotel room talking about the game, getting ready,” Bailey said.

The underdog Royals started their day under happier circumstances, upsetting sixth-seeded Rota 24-21. Marymount’s Roman neighbor American Overseas School of Rome also knocked around the Admirals, posting a 32-4 blowout in its only game of the day.

Bahrain edged ahead in the race to join BFA in the semifinals, building a big early lead and holding on for a 37-34 win over Aviano in its only game of the day.

Division IIISpangdahlem 32, Baumholder 31: The Sentinels erased a late deficit to pick up a key preliminary victory.

Third seed Spangdahlem handled the sixth-seeded Bucs in the regular season, and that knowledge contributed to some sluggish Sentinel play early in the game.

“We kind of let that take over the game,” Spangdahlem forward Isabelle Smith said. “We couldn’t get anything straight.”

A shift in attitude led to a shift on the scoreboard as Spangdahlem overcame a multiple-possession deficit behind a full-court press, crisp offense and solid free-throw shooting.

The second-seeded Alconbury Dragons kept pace with the Sentinels with a 45-29 defeat of seventh-seeded Hohenfels. Pool play heats up Thursday morning as Spangdahlem faces Hohenfels and Alconbury takes on Baumholder. Both the Sentinels and Dragons can clinch a semifinal spot with a win in that game.

Fifth-seeded Brussels joined the Jaguars in the semifinals with a pair of wins of their own. The Brigands beat Ansbach 20-11 and wrapped up Wednesday’s schedule with a 40-5 romp over Ankara.