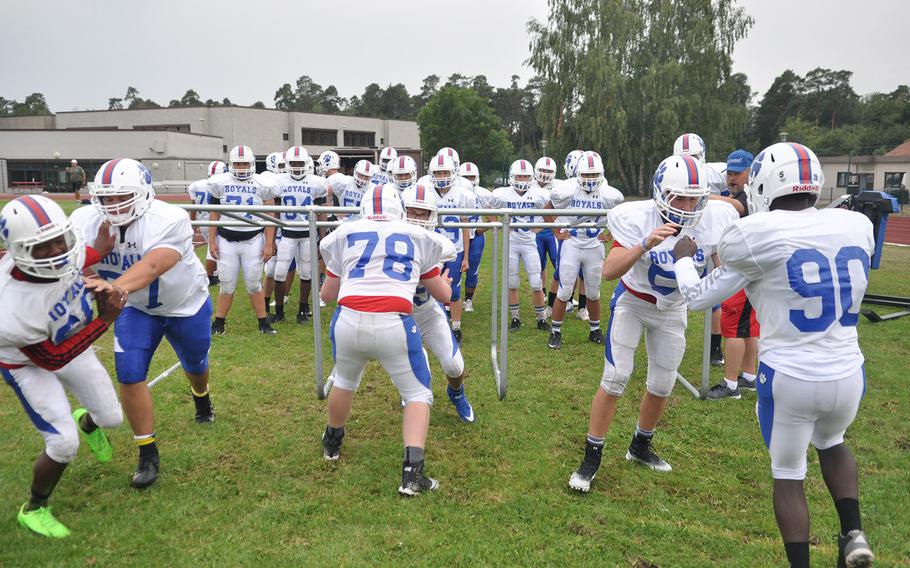 Buy Photo
Ramstein Royals players run through contact drills at a preseason practice at Ramstein Air Base, Germany. The Royals have 11 returning players back from a team that reached the European championship game in 2017. (Gregory Broome/Stars and Stripes)

Buy Photo
Ramstein Royals players run through contact drills at a preseason practice at Ramstein Air Base, Germany. The Royals have 11 returning players back from a team that reached the European championship game in 2017. (Gregory Broome/Stars and Stripes) 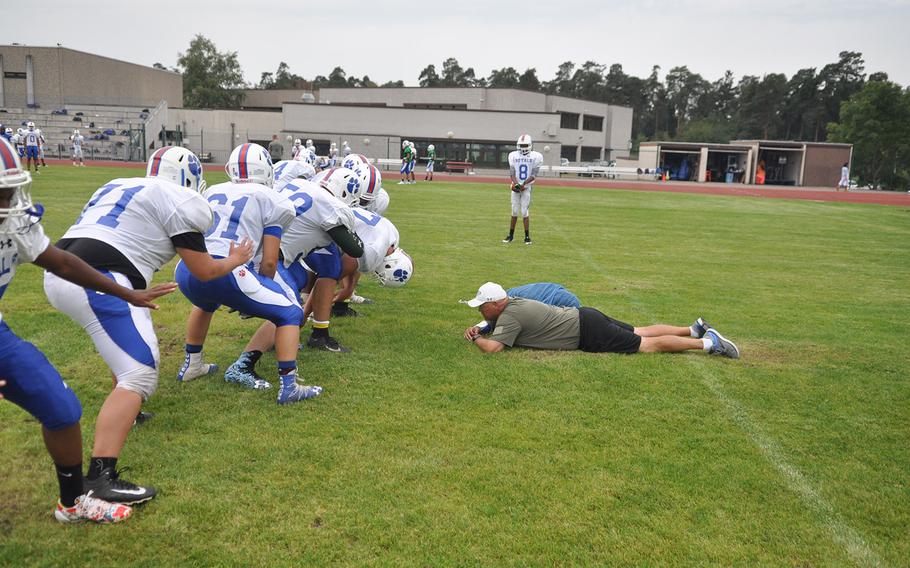 Buy Photo
Ramstein Royals head coach Carter Hollenbeck gets a close look at a placekicking drill at a preseason practice session at Ramstein Air Base, Germany. Hollenbeck leads a coaching staff that has worked together for multiple seasons. (Gregory Broome/Stars and Stripes) 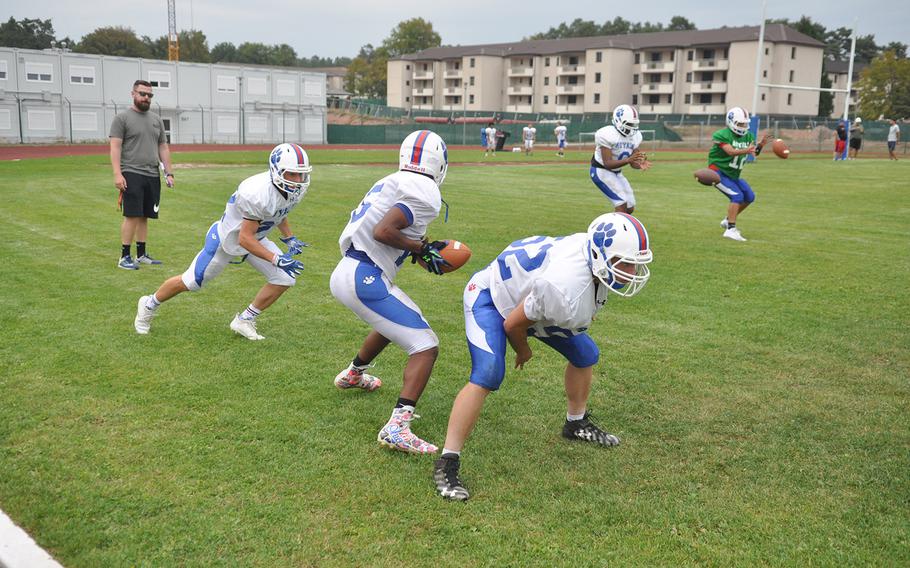 Buy Photo
Ramstein's JJ Little takes a snap from Marcus Bradley and prepares to hand off to Oliver Seelig in an offensive drill at Ramstein Air Base, Germany. The Royals have several key offensive players back from last year's European runner-up. (Gregory Broome/Stars and Stripes)

Eleventh in a series of looks at high school football camps around Europe.

Given the constant churn of families into and out of overseas bases, continuity is almost impossible to cultivate on a DODEA-Europe high school football roster. But it is more feasible on a coaching staff.

The Ramstein Royals have benefited greatly from that kind of sideline stability. Head coach Carter Hollenbeck was the Royals’ defensive mastermind before taking over the top job in 2016. His staff of assistants - Andrew Short, Jason Scherden, George Bradley, Chad Horne, Lamar Hall, Richie Wessman and Kevin Smith - have worked alongside Hollenbeck for years.

“Continuity of our coaching staff is huge for me,” Hollenbeck said. “It goes a long way. It really does. And the fact that we all like each other, that’s incredible.”

Hollenbeck and his colleagues have a substantial job ahead of them this fall as they get a new group of Royals ready to tangle with the likes of defending champion Stuttgart, perennially dangerous Wiesbaden, mercurial archrival Kaiserslautern and distant threats Lakenheath and Vilseck.

With 11 players back, the Royals aren’t entirely starting over. Last year’s European runner-up squad had a number of sophomores and juniors in key roles, many of whom are poised to make bigger impacts this fall. Running back JJ Little and wideout Naser Eaves headline the offense, while standout linebacker Bailey Holland spearheads the Royal defense.

The Royals also got a welcome boost on the line of scrimmage with the arrival of Spangdahlem transfer Nick Scherzer. Hollenbeck has big plans for the powerful two-way lineman, including the occasional handoff at fullback.

The Royals start their season with a non-conference matchup against Kaiserslautern on Sept. 8. Their first game to count towards playoff contention is a Sept. 15 kickoff against Stuttgart, a rematch of the Panthers’ 26-21 victory in last year’s championship game.