DODEA fall volleyball is canceled in Europe and Pacific, joining football on the sidelines 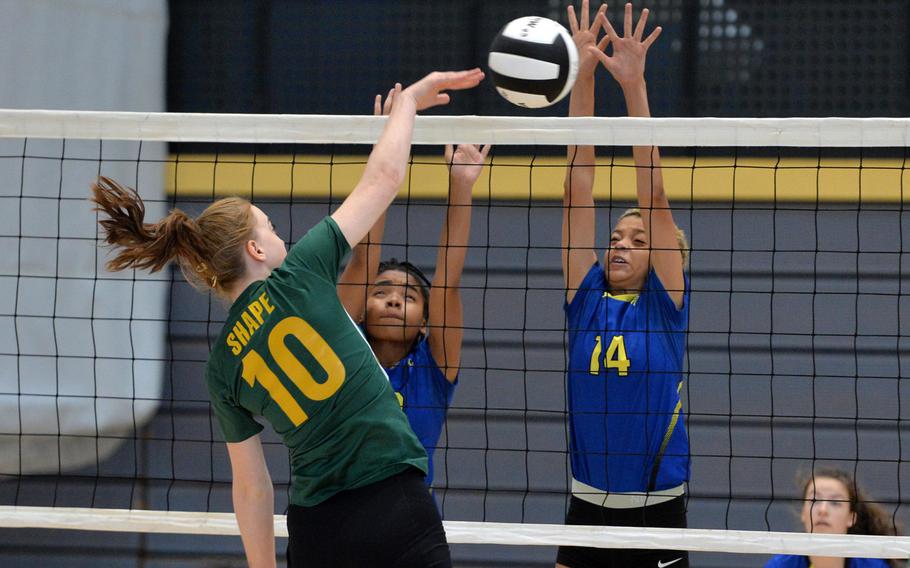 Clara Oberle of SHAPE hits past the Wiesbaden defense of Calen Prevo, left, and Alynna Palacios in a Division I match at last year's DODEA-Europe volleyball championships in Ramstein, Germany. The upcoming high school volleyball season in Europe has been canceled. (MICHAEL ABRAMS/STARS AND STRIPES)

Clara Oberle of SHAPE hits past the Wiesbaden defense of Calen Prevo, left, and Alynna Palacios in a Division I match at last year's DODEA-Europe volleyball championships in Ramstein, Germany. The upcoming high school volleyball season in Europe has been canceled. (MICHAEL ABRAMS/STARS AND STRIPES) 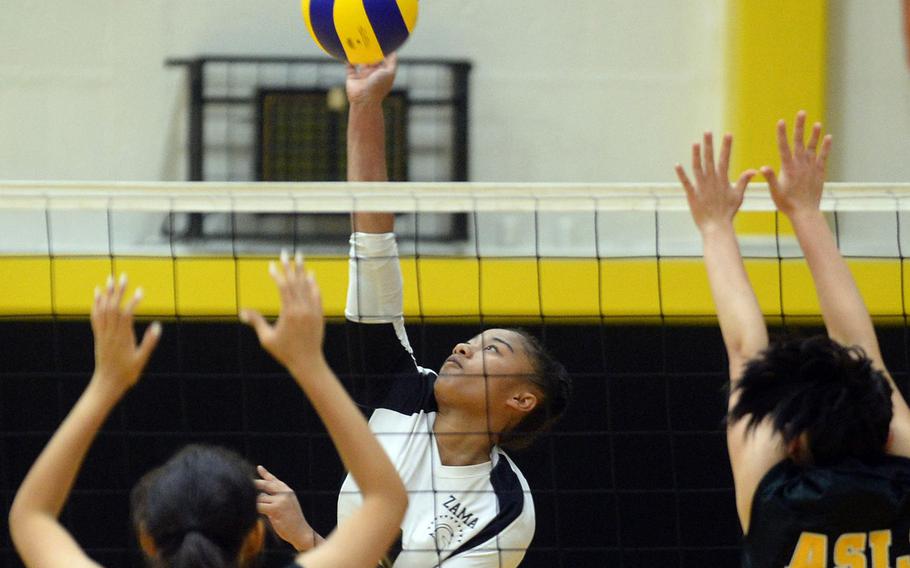 Senior Grace Bryant and her Zama American Trojans will lose out on a chance to defend their Far East Division II Tournament championship. (Dave Ornauer/Stars and Stripes)

Volleyball became the second fall sport to be canceled by both DODEA Pacific and DODEA Europe on Thursday due to concerns over the coronavirus pandemic.

DODEA Pacific chief of staff Todd Schlitz confirmed the move to Stripes in a Facebook message Thursday evening, a couple of hours after DODEA Europe athletics coordinator Kathy Clemmons confirmed that volleyball was off the table.

“Volleyball is not going to happen,” Schlitz said.

Fall football was canceled earlier this month in both locations. Singles tennis, cheer, cross country and golf are the sports being offered by DODEA in Europe and Pacific this fall, along with a competitive fitness-based activity in Europe that Clemmons hopes will attract the interest of sidelined student-athletes.

Practice for the remaining fall sports in Europe will begin Sept. 8, Clemmons said, around the time the regular seasons would start during a conventional fall. Details about the fall schedules, including European championship events, are yet to be finalized.

Volleyball practice was supposed to start on Monday in the Pacific, with school scheduled to begin on Aug. 24 and the first regular-season matches the weekend of Aug. 28-29 in DODEA Japan.

Reaction among coaches and players was negative, but understanding.

“Honestly, I’m OK with whatever decision they make,” said coach Veronica Jones of defending Far East D-II champion Zama American. “At this point, I just want the kids to be safe.”

Senior middle blocker Grace Bryant, the reigning Far East D-II Best Hitter and 2018 tournament Most Valuable Player, said she was disappointed her team wouldn’t get a chance to defend its title, but grateful for her previous opportunities.

“I’m forever thankful for everything my team and my coaches have taught me throughout the years,” Bryant said. “Not having a season will give me the motivation to work harder and I will use my spare time to better myself as a person and a athlete.”