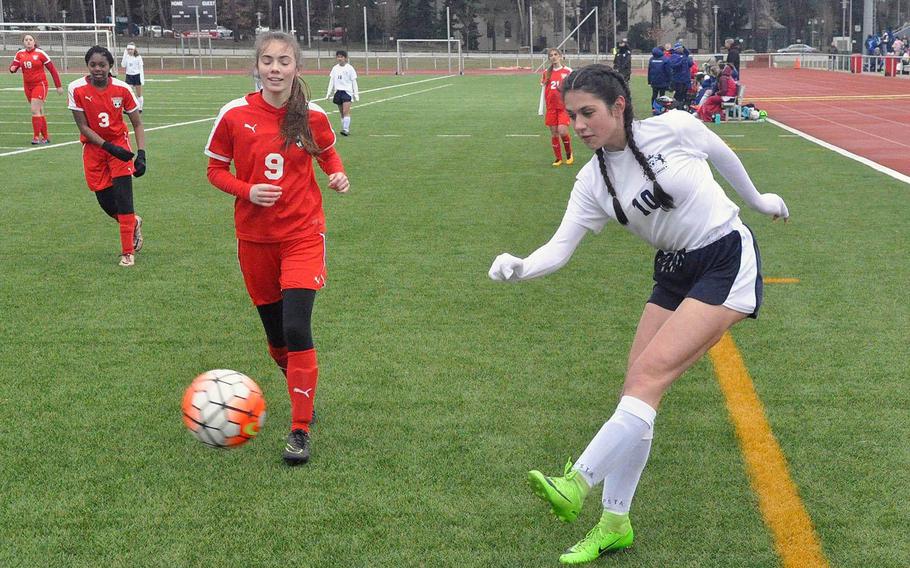 Rocio Fernandez of Ramstein sends a cross towards the goal in a game last season against the Kaiserslautern Raiders. DODEA-Europe has canceled the first two weeks of its upcoming spring sports season due to coronavirus concerns. (GREGORY BROOME/STARS AND STRIPES)

DODEA-Europe has canceled the first two weeks of its upcoming spring sports season due to concerns over the spread of the new coronavirus.

The decision was made “out of an abundance of caution and with the health and safety of our students and staff in mind,” Kathlene Clemmons, athletic director of DODEA-Europe, said in an email statement Thursday.

The decision cancels all games scheduled for the weekends of March 14 and 21, which includes the first two weeks of the soccer season and the first week of baseball and softball. Track and field, the remaining spring sport, is due to start March 28.

Clemmons added that DODEA-Europe “will reevaluate the conditions” in the coming weeks before making a decision about the season beyond the first two canceled weekends.

“We know that this is very disappointing to many but feel that this is the prudent course of action taking all variables into consideration,” Clemmons said.

DODEA-Europe had previously canceled a handful of March 14 games in Italy, where some schools are closed in response to the outbreak of the virus, before expanding the cancellations organization-wide Thursday.

Clemmons said that schools that remain open “should continue to hold practices for all teams as previously scheduled,” even as games are removed from the schedule. No makeup dates for the canceled games have been announced, though the organization’s weekend-heavy schedule makes that unlikely.

The DODEA-Europe spring season as scheduled runs through May 23.