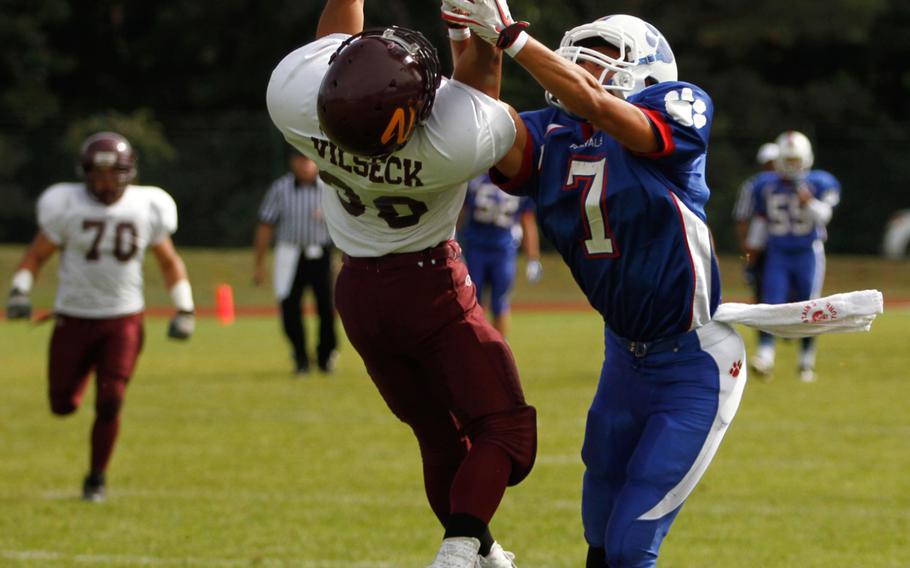 Vilseck sophomore Jermanin Hernandez nearly picks off a Ramstein pass meant for senior Gabriel Moreno in the first half of Ramstein's 30-3 victory over the visiting Falcons. (Matt Millham/Stars and Stripes)

Vilseck sophomore Jermanin Hernandez nearly picks off a Ramstein pass meant for senior Gabriel Moreno in the first half of Ramstein's 30-3 victory over the visiting Falcons. (Matt Millham/Stars and Stripes) 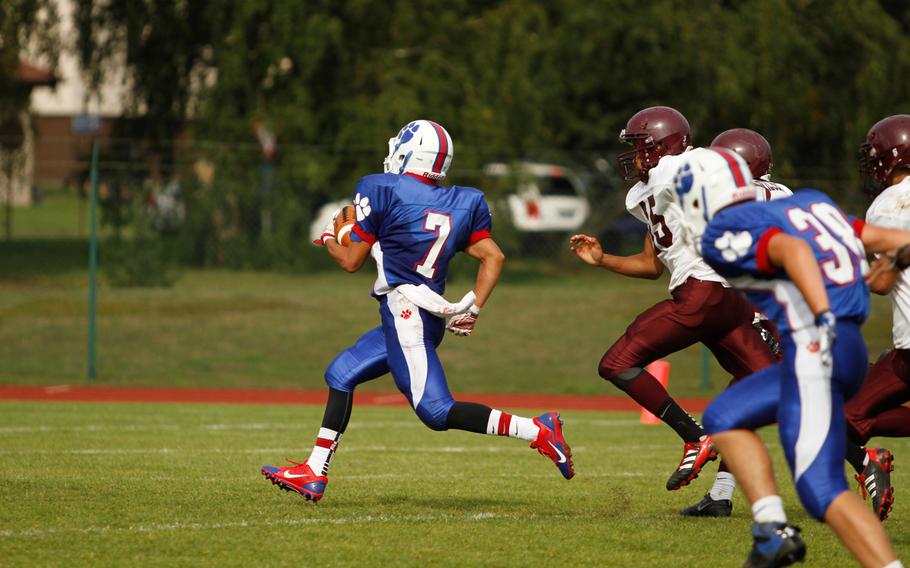 Ramstein's Gabriel Moreno strides to the end zone for an 86-yard catch and run in the Royals' 30-3 rout of Vilseck. (Matt Millham/Stars and Stripes) 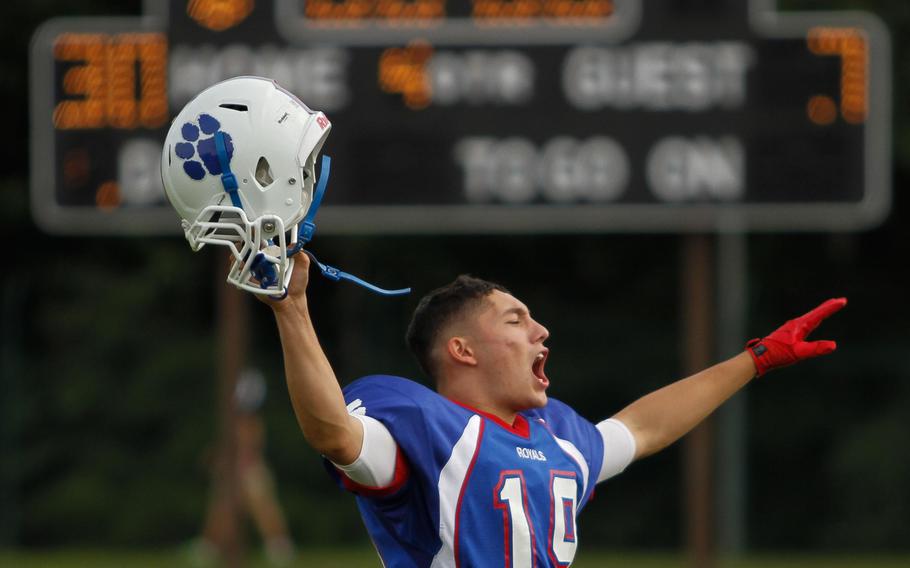 Ramstein quarterback Lucas Mireles celebrates his team's 30-3 victory Saturday over visiting Vilseck. The Royals are now 2-0; the Falcons 0-2 in DODDS-Europe's Division I. (Matt Millham/Stars and Stripes) 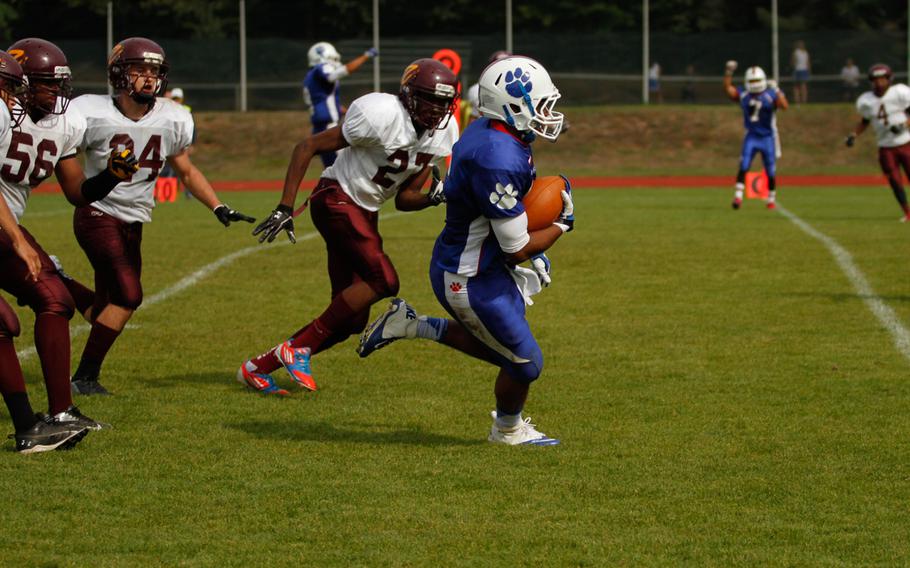 RAMSTEIN AIR BASE, Germany — Ramstein rolled over Vilseck’s Falcons 30-3 Saturday in a homecoming romp that reaffirmed the defending Division I champs’ status as the team to beat in a shortened DODDS-Europe football season. The Royals pounded out 263 yards on the ground and lofted 98 more through the air while their defense held the Falcons to just 55 yards of total offense. “We were more disciplined than we were last week,” Royals head coach Carlos Amponin said, referring to the basket of penalties his team collected in its week-one matchup against Lakenheath. “I didn’t like the end,” he said of this game’s late penalties, one of which set up a Falcons field goal that prevented a shutout. Ramstein dominated the first half, starting with a 50-yard kickoff return by Gabriel Moreno that set up a first-possession field goal to put the home team up 3-0 in the opening minutes. But the Royals struggled through the air, connecting just once for 15 yards in the first half on a strike from Lucas Mireles to Moreno. “I just didn’t get on rhythm,” quarterback Mireles said. An 86-yard Moreno touchdown in the third quarter helped pad the Royals throwing stats, which included just three completions and a first-half pick that highlighted Vilseck’s squelching pass defense. Despite Ramstein’s dominanation of the scoreboard, Amponin acknowledged weakness in his squad’s passing game. “For the third quarter, they really kept us pinned in our own territory,” he said. “They really didn’t allow us to do much more than just try to get some space. They made some nice halftime adjustments. Really shut us down. So we’re going to have to adjust better at halftime.” No excuses are needed for the Royals’ ground game. Senior Mireles kept the ball for an end zone run in the second quarter to put his side up 10-0. After forcing Vilseck to punt on its next possession, senior Robert Navarro scrambled for a 15-yard touchdown to put the Royals up 16-0. The extra point was good, ending the half at 17-0. Ramstein senior Tevin Johnson led all rushers, with 12 carries for 79 yards and a fourth-quarter touchdown. That score came right after Moreno snagged a jagged throw for an 86-yard touchdown that put the game out of the Falcons’ reach. “He definitely saved me on that one,” Mireles said of Moreno. “We had guys running into each other,” Vilseck coach Jim Hall told his squad in the post-game huddle. “That should never happen. Not once, not twice, but three or four times.” Two of those run-ins happened on Vilseck’s fourth-quarter scoring chance, when after a penalty, they had a first and goal at Ramstein’s 9-yard line. “First down and goal from the nine and you can’t score because you run a couple plays and you’ve got backs running over each other – that’s ridiculous,” Hall said. “That’s unacceptable. And that’s my fault because I’m the offensive coordinator.” The Royals’ victory came on the heels of a 21-6 win by the team’s junior varsity squad over Vilseck.Millham.matthew@stripes.com