D-I unbeaten ranks will be thinner after weekend 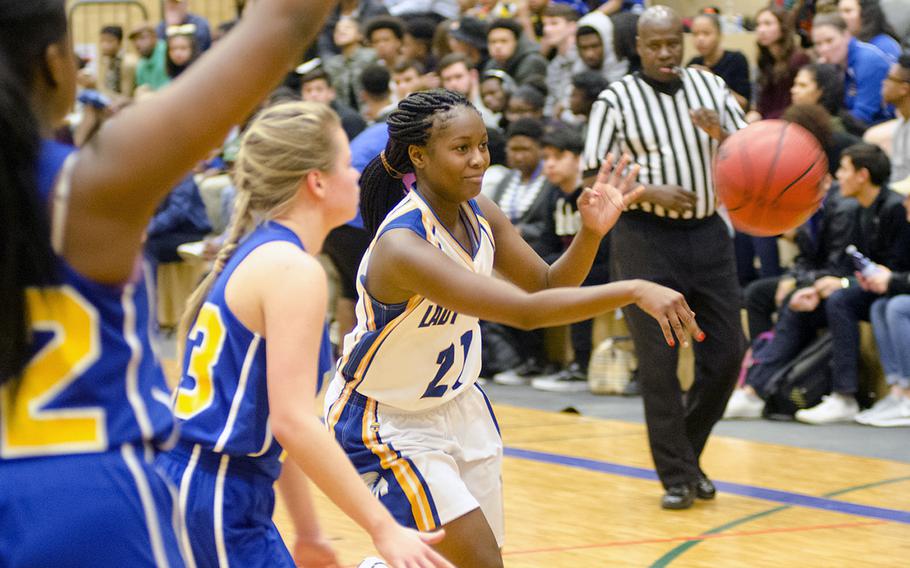 Wiesbaden's Tonika Williams distributes the ball in a girls basketball game against Ansbach, Friday, Jan. 8, 2016. Hosts Wiesbaden defeated the Cougars of Ansbach 42-20. The Warriors travel to Vilseck this weekend, while Ansbach is off. (Dan Stoutamire/Stars and Stripes)

Wiesbaden's Tonika Williams distributes the ball in a girls basketball game against Ansbach, Friday, Jan. 8, 2016. Hosts Wiesbaden defeated the Cougars of Ansbach 42-20. The Warriors travel to Vilseck this weekend, while Ansbach is off. (Dan Stoutamire/Stars and Stripes) 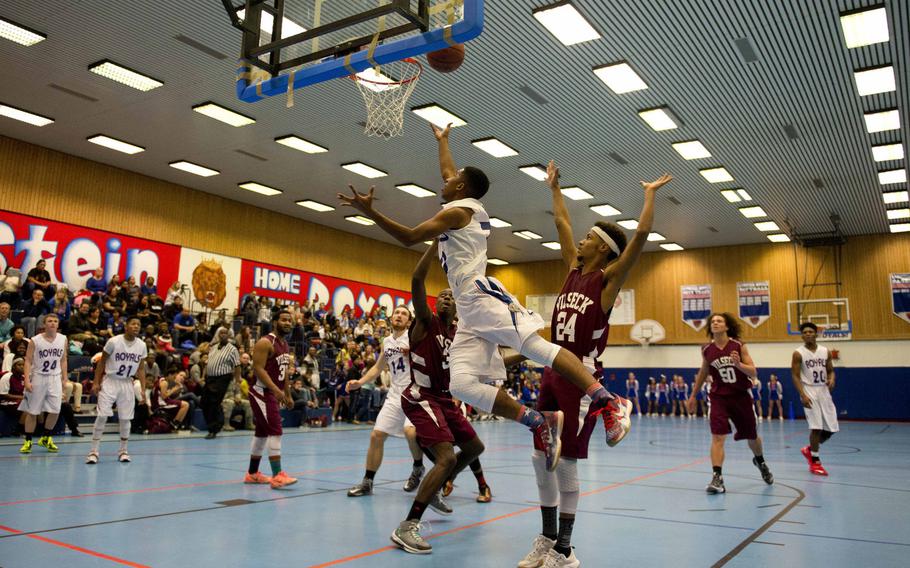 Ramstein Royal Keith Little goes in for a layup against Vilseck at Ramstein, Friday, Dec. 4, 2015. The Royals beat the visiting Falcons 51-33. Ramstein hosts SHAPE this weekend and Vilseck faces Wiesbaden at home. (Michael B. Keller/Stars and Stripes)

The race for Division I tournament seeding heats up this weekend with three key large-school hoops matchups. SHAPE will visit Ramstein, Kaiserslautern travels to Stuttgart and Wiesbaden faces host Vilseck in Friday and Saturday boys and girls games.

Here’s a look at the Division I landscape just a month removed from the postseason.

BoysNaples, Ramstein and SHAPE each remain unbeaten on the season. That will change for at least one team this weekend, and all three will be seriously tested.

SHAPE has been resurgent this season behind the stellar guard combination of Austin Stephens and Cameron Little. Though half their wins have come against Division III opponents, the Spartans have also proven their large-school legitimacy with sweeps of solid Division I squads Lakenheath and Wiesbaden. They’ll have the chance to shore up their spot in the division’s top tier with visits to Ramstein and Kaiserslautern over the next two weekends.

Ramstein should present SHAPE’s toughest challenge to date. The defending European champion Royals have very different personnel but similar results to last year’s outfit. All five of the team’s games this winter have been double-digit decisions over Division I opponents.

Naples, meanwhile, draws a Division II foe this weekend in visiting Marymount. But Marymount freshman Dominic Laffitte is as talented as anyone the Wildcats will see this year, and Naples’ dominant 6-0 start is at risk against the new Italian phenom. The Wildcats will counter with a dynamic guard of their own in Terrell Staten and figure to hold a decisive edge in overall talent.

Meanwhile, the Kaiserslautern-Stuttgart and Wiesbaden-Vilseck matchups offer their participants the chance to gain some separation from the Division I pack. The visiting Raiders and Warriors come in with winning overall records.

Elsewhere, Lakenheath will look to move north of .500 at the expense of visiting Division III team Brussels, while struggling Vicenza takes on Florence in search of its first win since the season’s opening night.

GirlsThe defending Division I champion Wiesbaden Warriors were supposed to be out of contention this season with just one player back from last year’s varsity squad. But the program’s new additions aren’t following that script.

Returning forward Rosette Gray and the Warriors’ capable reinforcements have the Warriors back in the Division I hunt with four straight wins, including defeats of Division I SHAPE and Kaiserslautern. Now 4-3, Wiesbaden can extend that streak with a successful trip to 3-3 Vilseck, itself coming off a big Division I win over Kaiserslautern.

Kaiserslautern, SHAPE and Stuttgart, while all .500 or better overall entering the weekend, carry a combined Division I record of 2-8. That’s in contrast to Ramstein, which is 5-0 in an all-Division I schedule and has won every game by at least 13 points.

Ultimately, Ramstein’s toughest opponent might come from outside of Germany. Lakenheath and Vicenza are both undefeated entering weekend sets against lower-division opponents; both will draw tougher competition on Jan. 29-30 as the Lancers visit Ramstein and the Cougars host a Division I meet-up featuring Naples, Stuttgart and Vilseck.