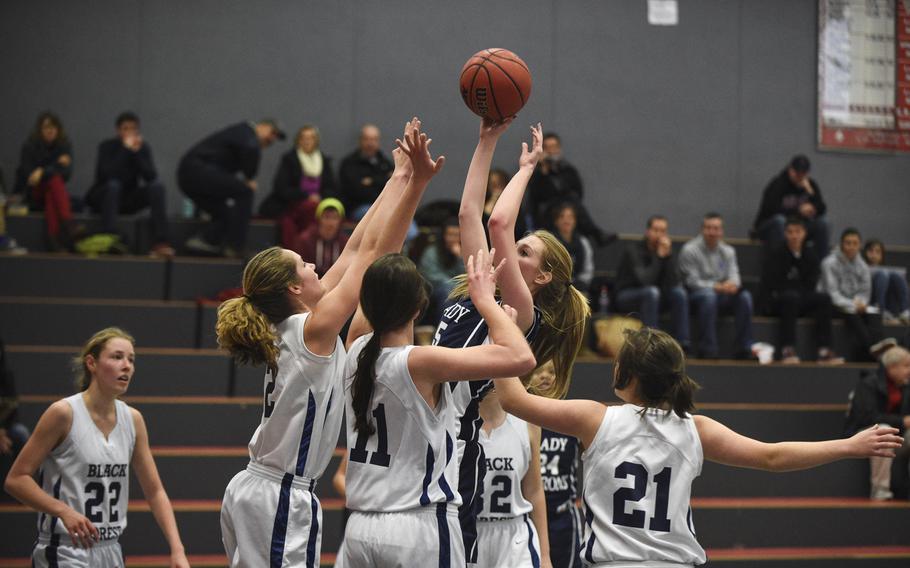 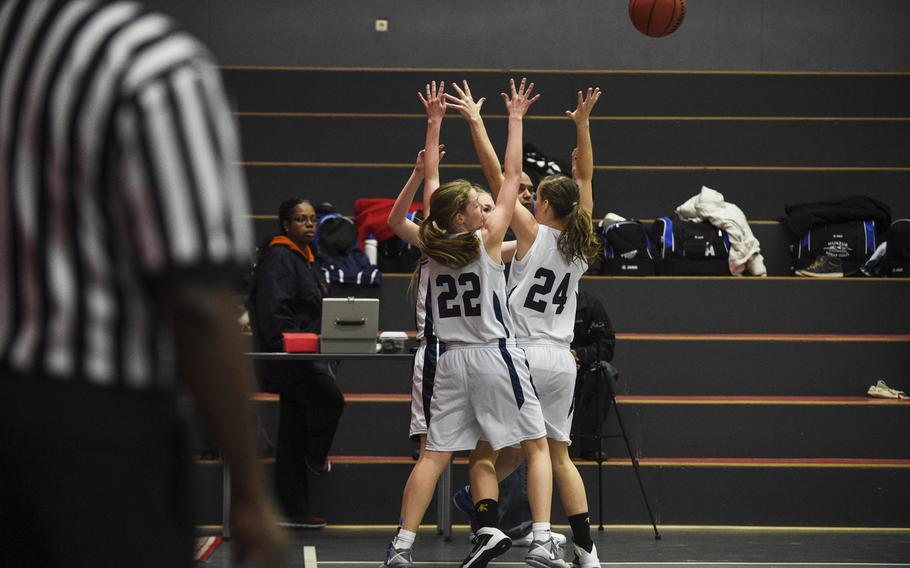 It’s said that Germany’s famous Black Forest earned its name from its thick canopy of trees that seems to block out all sunlight.

The DODDS-Europe girls basketball team of the same name seems to have taken that as inspiration.

Over the last two seasons, the defense of the Black Forest Academy Falcons has proven just as daunting to opposing offenses as those forbidding woods must have been to the long-ago wanderers who braved them. Like towering trees obscuring even the midday sun, BFA’s tall and sturdy athletes converge on ball handlers to obstruct every available line of sight and potential passing lane.

“I’ve got girls that are intuitive,” BFA coach Cevin Sweeney said. “They just get to the ball and cause problems.”

That straightforward explanation belies the sophisticated system of real-time reads and reactions Sweeney’s scheme asks of the Falcons.

BFA primarily deploys two zone defensive sets, which Sweeney liberally switches between to counter opponents’ strengths or, in his words, “just to see what happens.”

The 1-3-1 defense features three players at the free-throw line level alongside a quick guard at the top of the key and a tall post under the basket. This approach shuts down perimeter shooters but risks leaving too much space for interior passing or a strong opposing scorer on the low block.

The 2-3 defense features two guards on the elbows of the free-throw line and an imposing set of three defenders near the baseline, one in the paint and another near each block. This effectively snuffs out close-range opportunities but can be beaten by long-range shooters firing over the top.

As reasonable as those offensive counters sound, they rarely work. Instead, they’re usually nullified by BFA’s true strength, and the key to its elite defense: forcing turnovers.

In either set, Sweeney frequently sends help defenders to trap the ball as the other players reflexively dart into passing lanes. If the trap works as planned – and it often does – the harassed offensive player will throw a weak, wobbly or deflected pass that an off-ball Falcon can easily intercept. If the pass somehow gets through cleanly, BFA snaps back into formation and tries again.

“We want to disrupt the pass so that we can try to steal it,” Sweeney said.

The Falcons take this approach to such an extreme that sometimes all five BFA defenders will occupy the same side of the court, abandoning the weak side entirely. But exploiting that undefended territory would require the trapped offensive player to throw a sharp cross-court pass over the outstretched arms of at least two Falcons, with odds of success that Sweeney happily accepts.

“It’s a hard pass to make,” Sweeney said. “We can recover easily, because it’s usually a lob.”

While innovative in terms of its magnitude, BFA’s defense doesn’t diverge wildly from well-established conventions of zone defense. What makes it so effective, Sweeney said, is the Falcon personnel.

Senior forward Emily Campbell is BFA’s offensive centerpiece and, as the lone All-Europe selection from last year’s team, its apparent star player. But that’s a status she humbly declines. “We don’t really have a star player,” Campbell said.

Instead, the Falcons are stacked with talented and, as Campbell said, “interchangeable” athletes. Campbell, senior post anchor Eseli Emasealu and freshman Katie Greathouse hold down the long-armed frontcourt. The backcourt features quick-thinking and quick-moving guards such as senior Hannah Harrop and junior Anna Kragt.

While Sweeney’s system puts them in a position to succeed, it’s this cohesive group that handles the execution.

“Everyone is pretty good at using instincts,” Campbell said. “I don’t know if there’s a quarterback on our team.”

To her point, even the youngest Falcons are empowered with crucial and complex roles in the defense and the freedom to make split-second decisions. In the 1-3-1 set, Greathouse plays at the free-throw line, enforcing a mandate to “make sure they don’t get in the paint,” she said. In the 2-3, she takes over a low block opposite Campbell, with Emasealu holding down the middle. That role, Campbell said, involves “mostly jumping passing lanes” and “setting traps.”

Sweeney singled out Harrop as an underappreciated central figure in the defense; among her tasks is the subtle art of suggestively guiding a ball handler into a trap. Campbell, too, complimented Harrop’s gift for “frazzling” opposing point guards.

These are ambitious assignments for any young athlete. Sweeney counts himself lucky to have the roster to pull it off.

“Our defense works so well because we have the right players to play the various positions and they work off of each other,” Sweeney said.

The proof of the Falcons’ defensive acumen can be found in their opponent’s paltry scoring totals. No opponent in last year’s European tournament managed more than 18 points against BFA, including AFNORTH’s 13-point showing in the Division II title game. In its only two DODDS-Europe games this season, BFA held Patch to 27 and 21 points, respectively, in consecutive Falcon victories, a stunning showing against a proficient Division I program coming off an appearance in the European championship game.

Hohenfels coach Shawn Rodman has encountered the BFA defense in the past and is preparing for another set of games with the Falcons this weekend. He said it’s very difficult to prepare for BFA since most teams, including his, can’t duplicate the Falcons’ size and athleticism.

Rodman’s strategy is to limit turnovers, he said, and for his team to play its own stingy defense in hopes of making points as elusive for BFA as they’re likely to be for Hohenfels.

But just as a map can’t help a hiker navigate in total darkness, those well-developed plans might not help amongst the Black Forest Academy trees.

“Their defense is an offensive weapon,” Rodman said.