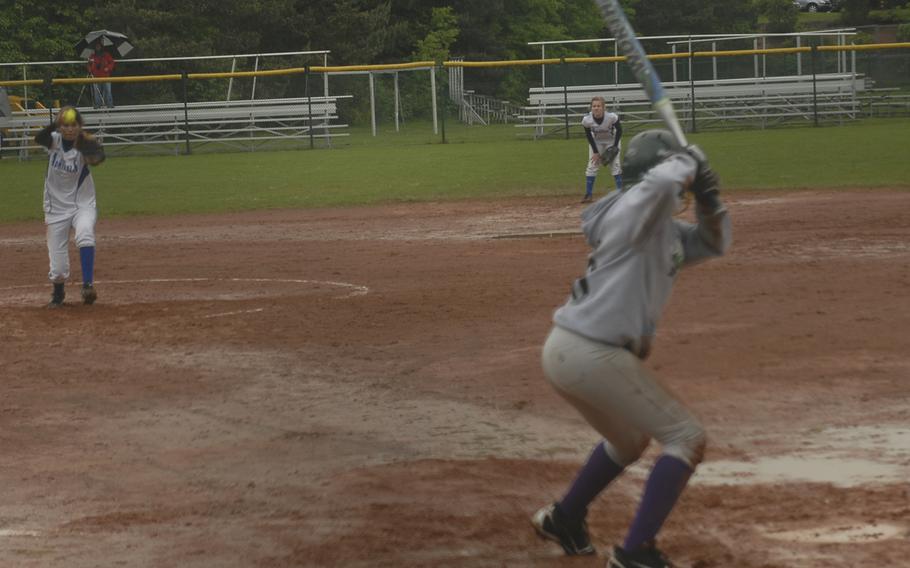 Rota pitcher Kasandra Velasco goes into her windup against Latavia Young of Alconbury on a muddy field at Ramstein Air Base on Thursday. Alconbury withstood a late rally by Rota to win 9-8 on the first of the three-day European softball championships. (Kevin Dougherty/Stars and Stripes)

RAMSTEIN, Germany – Despite a rain-soaked day on the diamonds, the European high school softball tournament managed to wring out all but a couple of scheduled games Thursday.

The tournament moves into the semifinal rounds Friday, followed by the championship games Saturday. Here are summaries of a few of the contests played Thursday:

Kaiserslautern 11, Wiesbaden 10: The Red Raiders withstood a late rally by the Warriors to pass their first test of the three-day tournament. The teams scored half of the game’s runs in the third inning, with Kaiserslautern notching six runs and Wiesbaden five.

Playing in a steady downpour, the game drew close in the final inning when Wiesbaden scored two runs on an RBI single by sophomore Rachel Beville to make it 11-10. Beville led the Warriors, going 4-for-4 with three RBIs. Ashlyn Lamb went 3-for-4 and drove in a run.

Leading Kaiserslautern was junior Alexes Liggins, who hit safely in all four of her at bats and knocked in a run. Junior Callie Hood batted in three runs, while senior Lexus Quesada stroked a home run.

Kaiserslautern, seeded third in the tournament, didn’t expect the game to be as tight as it was, attributing the narrow margin partly to the weather.

“That probably helped in making the score so close,” Kaiserslautern assistant coach George Isla said of the rain. “This being the first game, a lot of the girls were also maybe a little nervous, and anxious.”

Vilseck scored a pair of runs in the first inning and five more in the third. Lopez went 2-for-2 with three RBIs, while Richardson batted 2-for-3 and scored three runs.

Clamage gave up one run and one hit over five innings of work. She struck out three.

“All I think about is throwing strikes,” Clamage said after the game.

Baumholder 8, Incirlik 7: Baumholder rallied from an early 5-2 deficit to beat Incirlik in a Division III contest.

Key to the victory was a two-run triple by senior Key’Lanna Hunter. Hunter, the captain of the team, said she drew added inspiration when teammate Liz Jacobson collided with an Incirlik infielder just prior to her stepping into the box.

“I couldn’t do this without my ladies,” Hunter said. “We came here to fight and we’re going to win.”

Alconbury 9, Rota 8: The Dragons barely held off a late charge by the Admirals to capture their second win of the D-III tournament, having won earlier in the day.

Alconbury was leading 9-1 going into the last inning when Dragons pitcher Marrissa Cole had trouble finding the plate, a problem other pitchers experienced during the day as game balls became slicker by the inning.

With the bases loaded and two outs, Cole succeeded in getting the final out when a Rota batter hit a soft grounder to Alconbury third baseman Riley Sorensen, who scooped up the ball and stepped on third for the force out.