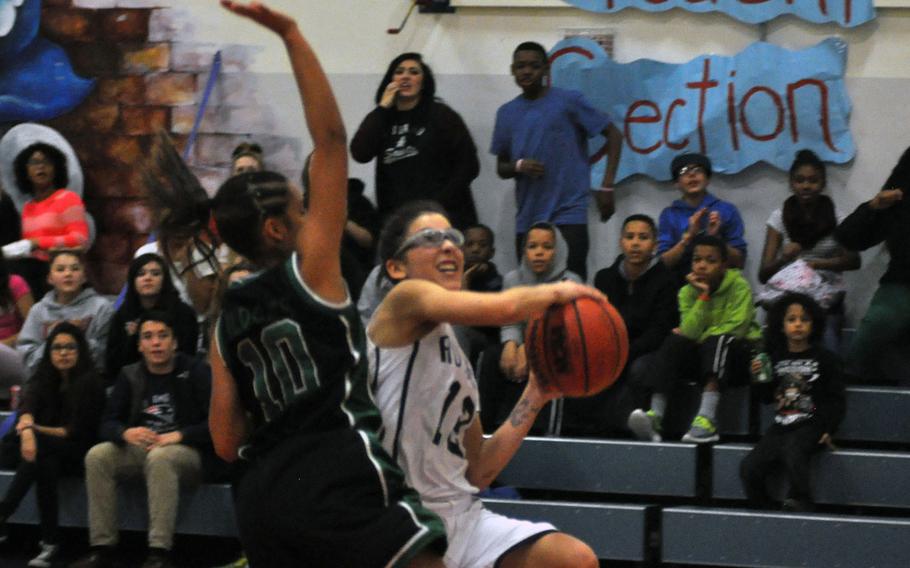 Aviano's Victoria Vigil goes to the basket while defended by Naples' Keylee Soto in a Dec. 12 game at Aviano Air Base, Italy. Both players will be in action this weekend against teams from Germany making rare visits south of the Alps. (Kent Harris/Stars and Stripes)

For a long time in DODDS-Europe athletics, the term “division” has had two distinct meanings.

First, there is the widely-known and accepted definition: a grouping as a platform for fair competition. Similarly-sized schools are placed in the same division and compete for a championship on relatively equal footing, at least in terms of student-body population. As an example, large schools like Kaiserslautern and Wiesbaden play for one European title, while small schools like Baumholder and Brussels play for another.

There is also, however, another division in DODDS-Europe. This refers to the circumstances, largely geographical and financial, that divide schools even in the same division from each other. Perhaps the most prominent example in recent years is the general lack of regular-season games, excepting football, pitting schools based in Italy against schools based anywhere else in DODDS-Europe. Another example: annual small-school Division III tournaments comprised of teams that often haven’t played each other since the previous year’s tournament.

The issue has long stirred conversation in DODDS-Europe circles. Now it appears to be stirring action.

This weekend, a total of 14 schools from five different European countries will gather in four events that can only be described as basketball meets.

The series of Friday and Saturday games – set for Alconbury in the United Kingdom, AFNORTH in Netherlands and Aviano and Vicenza in Italy – will allow teams not based in the DODDS-Europe stronghold of Germany an unusual level of access to some of the teams they will eventually face for a European championship.

That’s entirely by design, DODDS-Europe athletic director Karen Seadore said, and a direct result of the sweeping realignment that, among other changes, moved Italian teams Naples and Vicenza from Division II to Division I.

“With the realignment of the divisions, schools had requested that they have some regular-season competition against opponents in their division,” Seadore said. “This year we tried to provide at least one weekend of competition for the schools in Italy.”

It’s not a comprehensive solution. While American Overseas School of Rome, Aviano, Naples and Vicenza will all face foreign opponents this weekend, Division III Sigonella will host Marymount as part of a regular-season schedule comprised entirely of other Italian teams. But coaches agree that it is progress.

“I think these multi-team matchups are extremely important. I’m very much looking forward to playing teams that we usually don’t get to see until the tournament,” Aviano girls coach Laura Corder said. “These matchups are going to be a really great experience for our team.”

“It is always an advantage to see your competition in terms of preparation,” Clemmons said.

Elsewhere in Italy, Naples and host Vicenza will take on German schools Patch and Vilseck. Naples girls coach Shelley Smith said the games are a welcome addition to a schedule that mostly features smaller Division II and III in-country opponents.

“This should help us have a more realistic view of what our competition will be like in the European tournament,” Smith said. “This is the kind of competition we need.”

“The more Division I opponents we face, the better we are come tournament time,” Sabala said.

While this weekend was designed primarily to further incorporate Italian teams into the DODDS-Europe mix, a similar dynamic will play out in northern Europe. Rota will travel from Spain to Netherlands to face Bitburg and host AFNORTH in the only regular-season DODDS-Europe games on its schedule. Meanwhile, Baumholder and Menwith Hill will converge in Alconbury in a three-way Division III set, though Menwith Hill doesn’t field a girls team.

Baumholder girls coach Matt Martinez is happy for his team to participate.

“It is always nice knowing what to expect and what you will be up against come tournament time,” Martinez said.

But Martinez, a former athletic director at England-based Division I school Lakenheath, would like to see the concept deployed even further. His Bucs still navigate a schedule that stresses geographic convenience over school-size equality, and will play a home-and-home series with Division I Kaiserslautern next month to conclude its regular-season slate.

“It still would be nice to face more Division III teams and even the smaller Division II schools,” Martinez said. “Teaching and learning would be a ton easier if we could possibly see some immediate results from the labor the kids put into the program.”

More events like this weekend’s basketball meets would further address the lingering concerns Martinez laid out. DODDS-Europe scheduling is trending in that direction, though Seadore wouldn’t commit beyond the coming soccer, baseball and softball seasons.

“For the spring, we are looking at a similar format for the Italy schools,” Seadore said. “Beyond that, I have no idea what (the 2015-16 school year) will bring with regard to funding.