AOSR's Alison Cook puts up two of her game-high 20 points Saturday in the Falcons' 36-21 victory over Ansbach. (Kent Harris/Stars and Stripes)

AOSR's Alison Cook puts up two of her game-high 20 points Saturday in the Falcons' 36-21 victory over Ansbach. (Kent Harris/Stars and Stripes) AOSR point guard Alessia Giambini splits the Ansbach defense while driving to the basket Saturday, Jan. 24, 2015, in a 36-21 victory. (Kent Harris/Stars and Stripes) 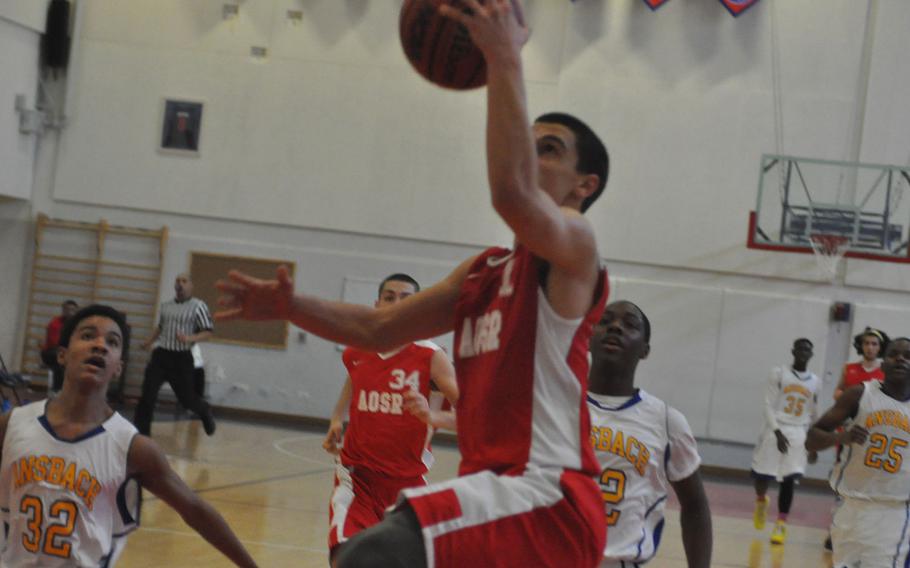 AOSR sophomore point guard Otis Reale goes in for one of his numerous layups Saturday, Jan. 24, 2015, in the Falcons' 65-43 victory over Ansbach. (Kent Harris/Stars and Stripes) Aviano's Dimitri Dawson puts up a shot before Hohenfels' Tony Saintemlus can get to the ball Saturday in the Saints' 47-44 victory. (Kent Harris/Stars and Stripes) Hohenfels' Justin Standifer can't get there in time to stop Aviano's Marcus Brown from scoring two of his 14 points in the Saints' 57-44 victory Saturday. (Kent Harris/Stars and Stripes)

AVIANO AIR BASE, Italy – A lot can change over the course of a basketball season, even one as short as DODDS-Europe.

American Overseas School of Rome, swept by Aviano to begin the season in both boys and girls action, looked like the best team on the court in both respective brackets Saturday.

Each Falcons team has two standouts who can seemingly keep their teams in the game offensively by themselves. But when their teammates join in the scoring, each pull away from their foes.

AOSR boys 65, Ansbach 43: Falcon sophomore point guard Otis Reale topped himself Saturday, scoring 40 points as the Falcons pulled away from the stubborn Cougars in the second and third periods.

“The kid is a phenomenal basketball player,” said longtime AOSR coach Phil Davis after watching him score 75 points in two games over the weekend.

But Davis stresses team play and liked what he saw from a handful of other Falcons who contributed in various ways. And when they started hitting shots, the team pulled away.

Despite a mercy rule victory Friday and a 22-point win Saturday, Davis said he felt his team learned from each experience.

“That’s why events like this are great,” he said. “When you’re able to play against a team you haven’t seen before, you can learn more about yourself and what you need to do to get better.”

Not that the Falcons need to get much better to make a run at a D-II title. Aviano coaches said both AOSR teams have improved greatly since their season-opening contests.

But three other teammates then found their range and AOSR pulled away.

The good news for the Cougars was they cut down their turnovers by nine from Friday. The bad news was they still had 27.

Hohenfels girls 31, Aviano 21: The Tigers scored the final 17 points of a game marred by an ankle injury that could spell the end of Aviano point guard Victoria Vigil’s high school career.

Vigil collided with Hohenfels’ Shelby Atkinson late in the second quarter while going for the ball near the sidelines. She writhed in pain after hitting the floor and the game was delayed until an ambulance arrived.

The Saints rallied to score the first eight points of the third period to take a 21-14 advantage. But Hohenfels responded with three points to trim into the lead, then shut the Saints out 14-0 in the final period.

“It wasn’t the injury,” Aviano coach Laura Corder said. “We just didn’t have our minds in the game.”

Atkinson, somewhat taken out of her scoring game by the Saints defense, played distributor instead and fed post players Sierra Standifer (10 points) and Bella Sacriste (eight).

“That was great to see, because they’re rookies,” Hohenfels coach Shawn Rodman said. “Shelby didn’t score, but she was all over the court.”

Aviano boys 57, Hohenfels 44: Moral victories don’t count in the standings, but the Tigers – short-handed and mercy- ruled Friday by AOSR – might have earned one against the Saints.

“I just feel like they all played hard,” longtime coach Kathlene Clemmons said after giving each of her players a smile and word of encouragement after the game. “We are missing people and we want to have everyone feel like they’re a part of this team and contribute and they did.”

Just not quite enough to beat the Saints, though it was close much of the way. Junior Brandon Vigil went on a tear in the final quarter, scoring more than half his game-high 19 points to help the Saints pull away.

But since his team isn’t likely to grow much physically the rest of the season, Harris is looking for a different kind of growth. He said whatever seed Aviano – which hasn’t lost a D-II game so far – receives for the European finals, doesn’t matter much to him.

“These kind of games aren’t important for seeding,” he said. “They’re important for practice. We don’t want to be peaking now. We want to keep getting better and peak at the right time.”