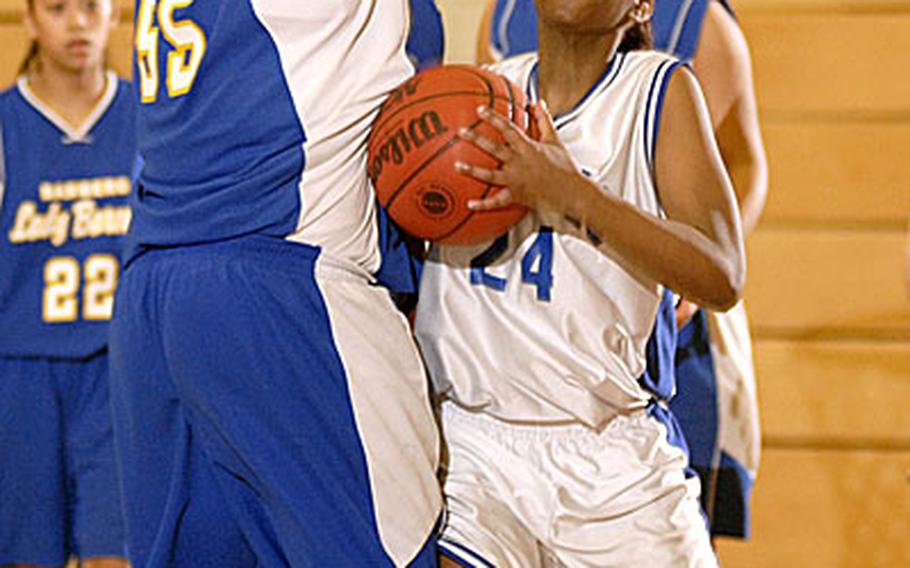 Reliesha Burns, a senior from Brussels High School, leans into Bamberg&#39;s Belinda Zapata during Brussels 43-20 win a semifinal game in the DODDS-Europe Division IV tournament on Thursday. Brussels, which had only six players, will face Lajes in Friday&#39;s final. Burns was the game&#39;s high scorer with 15 points. (Ben Bloker / S&S)

Reliesha Burns, a senior from Brussels High School, leans into Bamberg&#39;s Belinda Zapata during Brussels 43-20 win a semifinal game in the DODDS-Europe Division IV tournament on Thursday. Brussels, which had only six players, will face Lajes in Friday&#39;s final. Burns was the game&#39;s high scorer with 15 points. (Ben Bloker / S&S) 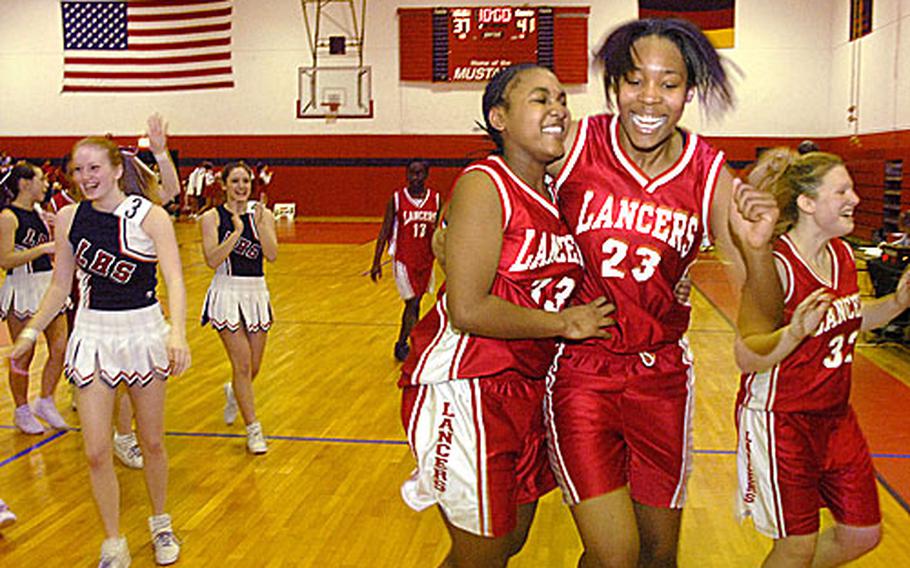 Erica Turner, left, and Angelia Gafford from Lakenheath High School celebrate their 41-37 victory over Kaiserslautern during their Division I game at the DODDS-Europe basketball championships Thursday at Mannheim. The win, however, was not enough to get the Lancers into the semifinals. (Ben Bloker / S&S) 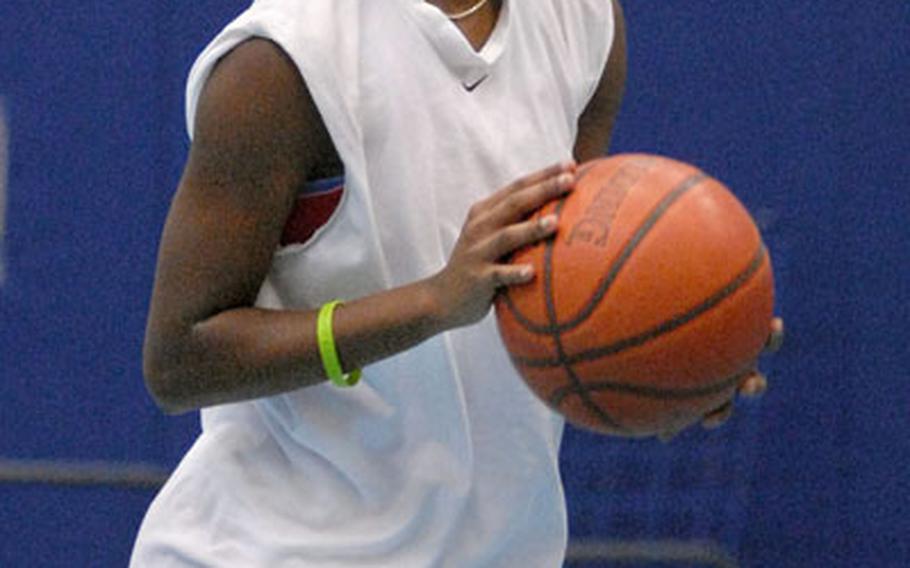 Kendra Lenoir, is looking to lead the undefeated Ramstein Lady Royals to the Division I title. The Department of Defense Dependents Schools-Europe tournament begins Wednesday in Mannheim and Heidelberg, Germany. (Ben Bloker / S&S) 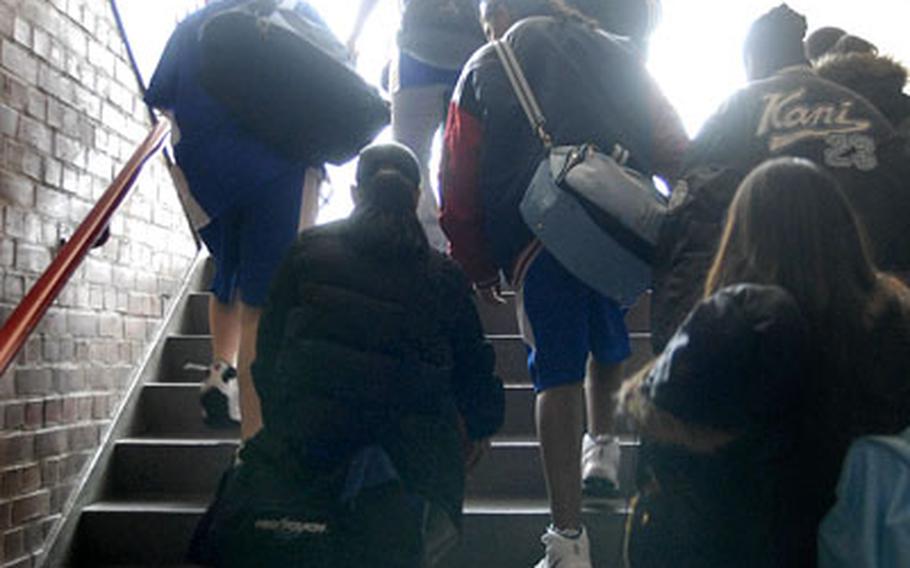 Bamberg girls walk the stairs to the stands to wait for their Division IV match-up against Brussels at the DODDS-Europe High School basketball championships Thursday at Mannheim. (Ben Bloker / S&S)

MANNHEIM, Germany &#8212; Lajes junior Alexa McMonagle hit a three-pointer with seven seconds left, lifting the Falcons to a 33-32 victory over Menwith Hill on Thursday in the semifinals of the DODDS-Europe Division IV basketball tournament.

McMonagle dropped in her shot from the right wing shortly after the Lady Mustangs&#8217; Desiree Moore hit a basket to break a 30-30 tie.

Amy Wagner drove into the left side of the Lajes front court, then dropped the ball back to point guard Larissa Palmer. Palmer whipped the ball to McMonagle, who was open for her game-winning dagger.

McMonagle, who led all scorers with 17 points, was 3-for-13 from beyond the arc, but she made the one that counted most, and her points came when her team needed them most.

McMonagle had only three points in the first half, and her team trailed 18-13 at halftime. But after the Falcons fell behind 28-20, she scored nine in the final quarter. She also finished with10 rebounds and three steals.

Wagner added 12 points for Lajes. She was especially effective from the free-throw line, sinking four of six.

Moore had 12 points and 12 rebounds to lead Menwith Hill in both categories. Kayla Kinch added eight points for the Lady Mustangs.

Lajes advanced to Friday afternoon&#8217;s title game against Brussels, the defending D-IV champ, which advanced to the final with a 43-20 victory over Bamberg on Thursday behind 15 points from Reliesha Burns and 13 from Elizabeth McVicker.

Unbeaten Ramstein coasted through its pool on Wednesday; Heidelberg nailed down the Pool B title with a 22-18 victory over International School of Brussels to go 3-0 in its section.

In Division II, No. 3 Vilseck downed No. 2 Baumholder, the II-North champions, 40-24, and Naples bounced back from its first loss of the season, 28-25 to W&#252;rzburg on Wednesday night, to hold off Black Forest Academy 38-33. Division II is scheduled for semifinals for both sexes at 11:30 and 1 p.m. Friday, with the title games late Saturday afternoon.

Division III opened its pool slate Thursday with few surprises. Top-seeded Hanau and No. 2 Giessen posted dominating victories over Italy-based schools, as did No. 3 Rota.

Pool play continues Friday, with the semifinals set for Saturday morning and the title games that afternoon.

Admission on both days is $5 for adults and $3 for students.

Tournament scoreboardMANNHEIM, Germany &#8212; Results from the 2007 DODDS-Europe high school girls basketball championships, which end Friday for Divisions I and IV and Saturday for Divisions II and III (Pool-play games consist of 7-minute quarters; periods in semifinals and finals are 8 minutes):