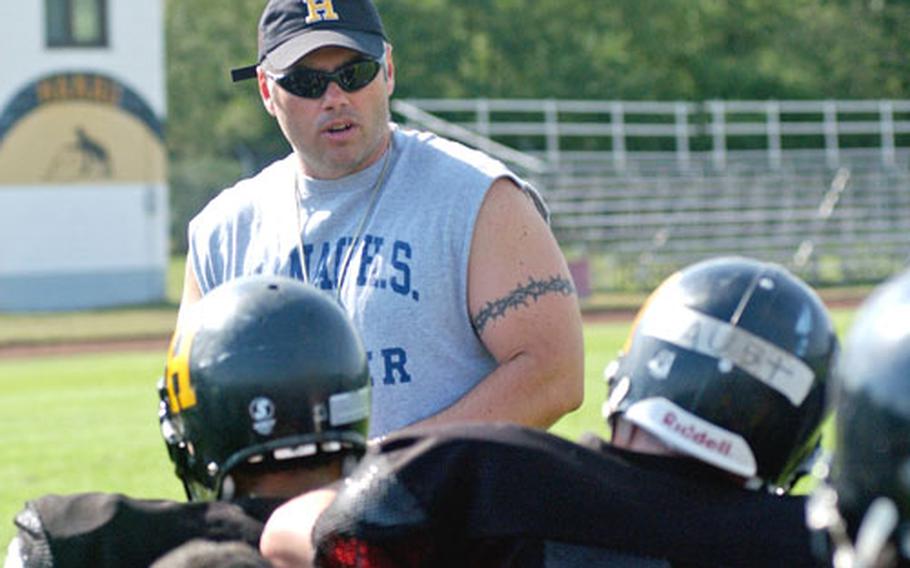 Hanau High School football coach Sam Cassou talks to his team during practice. Defending DODDS-Europe Division II champ Hanau is competing in Division III this year, due to a drop in the size of the school&#39;s student body. (Michael Abrams / S&S)

Realignment is the big story for DODDS-Europe&#8217;s football teams as they prepare to kick off the 2006 high school season.

The transformation of U.S. forces in Europe affected the enrollment of several schools, resulting in a shift of four teams to new divisions.

Hanau made the most notable move. Enrollment dropped to the point where the unbeaten European Division II champion will play this year against the school system&#8217;s smallest schools in Division III.

The enrollment at W&#252;rzburg, a Division I mainstay for decades, also shrank sufficiently enough to drop the Wolves into Division II.

In contrast, Vicenza grew enough to make the jump from Division III to Division II.

The Patch Panthers were moved up to Division I to take the place of W&#252;rzburg.

The challenge is evident, too, to Adam Ridgley, in his first year as head coach for Vicenza.

&#8220;We&#8217;ve got our work cut out for us,&#8221; said Ridgley, whose Cougars historically have played in Division III, although every season included a game against Division II neighbor Aviano.

Moving down will hardly be a cakewalk, even for a Hanau team that lost only three players from its 2005 championship squad, which went 8-0.

&#8220;We play two of the best teams right off the bat,&#8221; Hanau coach Sam Cassou said of an opening slate that has his Panthers visiting Ansbach, which is 30-2 over the past five seasons, and hosting Hohenfels, the Division III champion that handed Ansbach both of those losses, the following week.

W&#252;rzburg head coach Eric Mead said his team is coping well with its changes, especially after the turmoil it went through in 2005.

&#8220;Last year, everyone saw all their friends leaving and thought the school was going down the tubes,&#8221; said Mead, who won European titles at Alconbury in 1998 and W&#252;rzburg in 2002 before taking a break from coaching.

&#8220;Now, everyone who was going to leave has gone and things have settled down. The kids are a lot more enthusiastic. We have a lot of kids out who would not have come out if we were still a D-I school.&#8221;

Chief among those giving it a try is his starting quarterback Carlos Figueroa, a senior who&#8217;s playing football for the first time.

&#8220;He&#8217;s looking really good,&#8221; Mead said of Figueroa, who&#8217;ll get his first test Saturday against Patch, the team the Wolves replaced in Division II. Along with Hanau&#8217;s game at Ansbach, it&#8217;s a matchup that will be emblematic of the shift from thinking about realignment to what really matters for the 1,000-or-so DODDS-Europe players: playing the game.

Nonconference&#8212; Ramstein at Heidelberg; Lakenheath at SHAPE; Kaiserslautern at Wiesbaden; W&#252;rzburg at Patch.