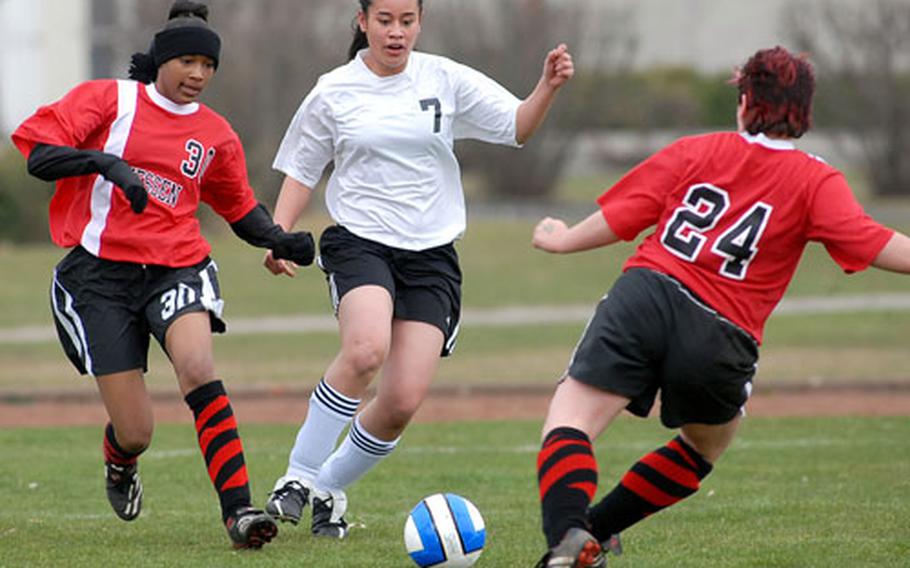 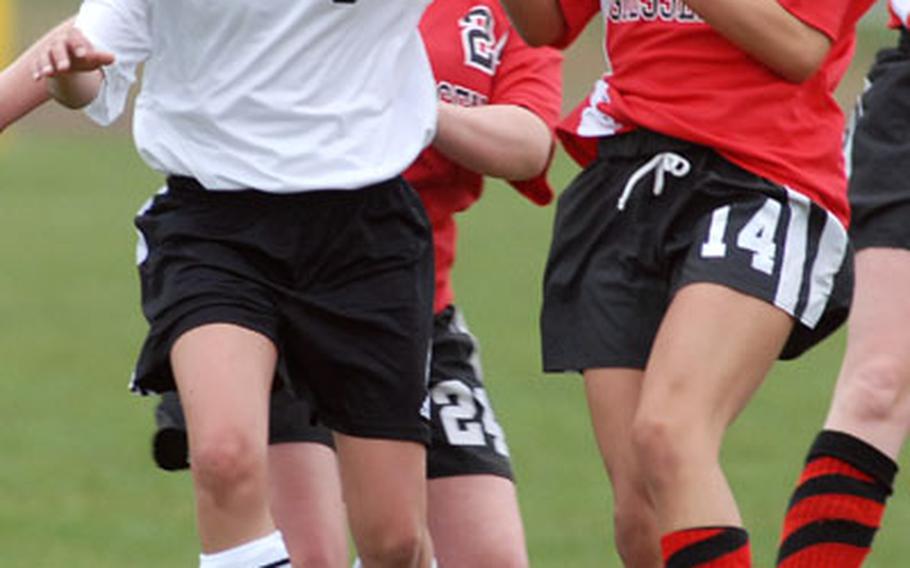 Hanau&#39;s Halie Arriaga, left, tangles with Giessen&#39;s Jasmae Salters, right, for the ball, as Janet O &#39;Brien, partially obscured, tries to get in on the action. (Michael Abrams / S&S)

Just how special the Lady Lions are will become clearer in their next two games. AFNORTH hosts Bitburg this Saturday, then plays at SHAPE on April 21.

Kylee Wilstead scored twice for AFNORTH, which also got goals from Alexia Roya and Katrina Smith.

In other girls games of note on Saturday:

SHAPE 4, Bitburg 2: At Bitburg, Tanja Kerchen, Emily Brown and Kirsten Schunk each registered a goal and an assist in this II-North game.

Maren Espelid tallied the other goal for SHAPE, which also got an assists from Mona Khalifeh.

Megan Pollock and Rachel Poock scored in the second half for Bitburg.

Hanau 1, Giessen 0: At Hanau, All-European Fei Oloi scored an unassisted goal in the 23rd minute, and a defensive charge led by Lisa Fernandez and Kate Macagnan made it stand up for a III-South victory.

Aviano 1, Vicenza 0: At Vicenza, Italy, Brittany Patrick scored off a feed from Samantha Cordova as the defending American Schools in Italy League champs opened defense of their crown.

Mannheim 1, Vilseck 0: At Mannheim, the Lady Bison picked up a II-South forfeit victory when, according to Mannheim coach John Crockett, Vilseck declined to make the trip after too few players met the 10-practice rule for eligibility of opening-day play.

Mannheim 1, Vilseck 0 (Forfeit Saturday at Mannheim)Noteworthy&#8212;According to Mannheim coach John Crockett, Vilseck declined to make the trip to Hanau because too few of their players met DODDS-Europe&#8217;s 10-practice rule to be eligible for an opening game.