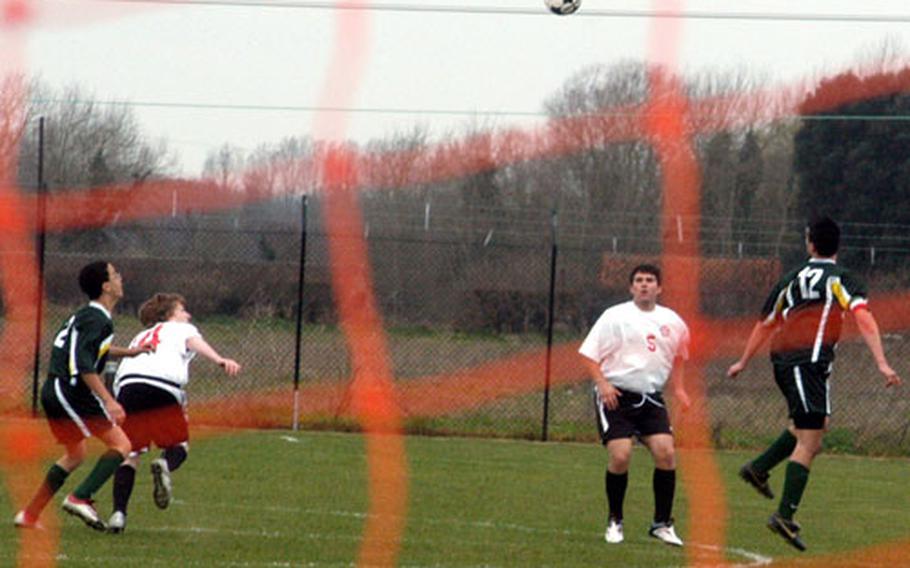 The boys soccer teams from Lakenheath and Alconbury high schools were among the squads squaring off Saturday in a preseaon soccer jamboree at Lakenheath High School. (Geoff Ziezulewicz / S&S)

Malcolm Griffin assisted on one of Lane&#8217;s goals and later crossed the ball to Jamal Henerey, who headed in another score. Fulgencio Beken scored Hanau&#8217;s other goal unassisted.

Hanau led 4-1 at halftime of this nine-on-nine game, brought about, according to Hanau coach Travis Schupp, when only nine Giessen players met eligibility rules for the opening game of the season. Hanau elected to play nine in deference to Giessen.

Hanau&#8217;s Emmanuel Moore, playing his first soccer game ever, according to Schupp, had four saves. Matt Potter was credited with seven saves for Giessen.

In other boys games of note on opening day:

Patch 1, Heidelberg 1: At Stuttgart, Germany, Patch&#8217;s Shant Mathas and Heidelberg&#8217;s Sean Kerber exchanged second-half goals as the Panthers made their Division I debut by tying the defending European champions.

&#8220;The game gave the fans a taste of what may be a hotly disputed Division I conference [race],&#8221; Wiesbaden coach Ben Arcila wrote in an e-mail to Stars and Stripes.

AFNORTH 5, Baumholder 0: At Brunssum, Netherlands, All-European Chris Eden scored two goals and assisted on a third as AFNORTH broke open a tight game in the second half.

Alex Hartung collected three assists for AFNORTH, which found its offensive spark, according to coach Greg Blankenship, when Tobias Christmann, who scored a goal, moved to center forward in the second half.

BFA 7, W&#252;rzburg 0 (Saturday at W&#252;rzburg)Goals-Unavailable.Assists-Unavailable.Saves-Black Forest Acedemy unavailable; W&#252;rzburg (Brad Hannum) 10.Noteworthy&#8212;Scorekeeping ended in 32nd minute by seven-goal courtesy rule, according to W&#252;rzburg coach Stefan Hopkins. &#8220;It was good to face a team of that quality in our first game,&#8221; he said after his team allowed just two goals in the second half. He said BFA&#8217;s coaches chose not to name the team&#8217;s scorers.