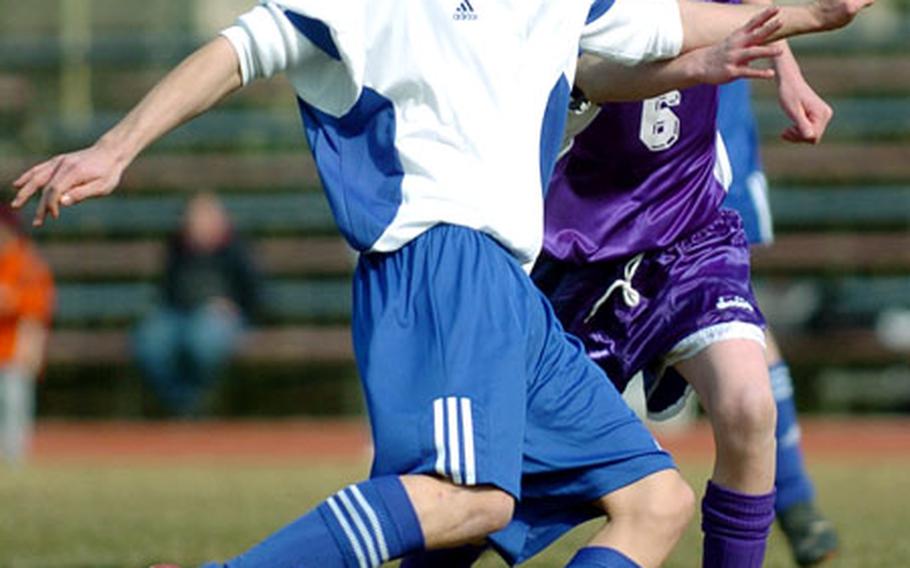 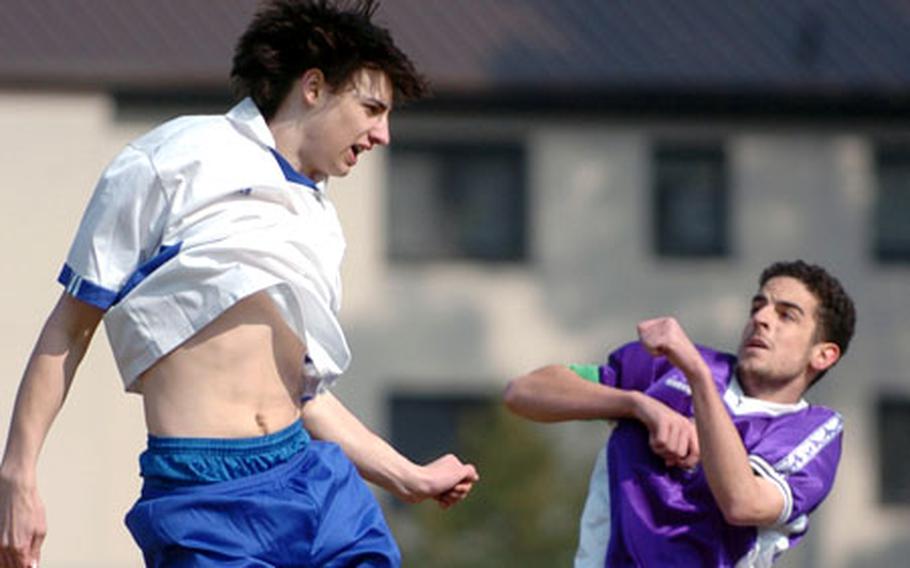 The American Overseas School of Rome boys began their quest for a fourth straight European Division III soccer championship Saturday with a 5-0 road blanking of the Aviano Saints.

&#8220;They played a strong game,&#8221; said Aviano coach Steve Stanley, whose Saints will play Division II in the European tournaments in May and thus won&#8217;t have to face AOSR again.

Stanley, however, would like another crack at the Italian-dominated AOSR lineup.

Hohenfels 7, Bamberg 0: At Bamberg, Jimmy Pietra and Idrissa Soumaroro each scored twice in the seven-goal courtesy rule victory over an 11-player Bamberg squad.

Although both teams play in III-South, this game was designated as nonconference. Both teams&#8217; preparations were hampered by snow-covered fields.

Bitburg 3, Mannheim 1: At Bitburg, Brian Schwenneker scored on a free kick and put another free kick onto the head of Chris Winkler for a second Bitburg goal as the Barons collected a Division II conference victory.

Ramstein 7, W&#252;rzburg 0: At Ramstein, the defending European Division I champs got six goals from freshmen and sophomores in a league victory that ended at halftime because of the seven-goal courtesy rule.

Justin Wiehe scored two of the goals, and Jack Marinich had two assists for Ramstein, which got solid defensive play from Sean Bannister and Michael Soto, according to Royals coach Dan Nukala.

ISB 5, Wiesbaden 0: At Brussels, Chris Ireland scored twice and the Raiders kept pace with Ramstein atop the Division I standings.

SHAPE 2, AFNORTH 2: At Brunssum, Netherlands, David Pohl, off a feed from Tobias Schick, scored his second goal of the game with less than four minutes to play to give AFNORTH the tie.

AFNORTH dominated the first half and led 1-0 at the break, according to AFNORTH coach Greg Blankenship. But SHAPE took charge after intermission, playing the first 22 minutes of the second half on AFNORTH&#8217;s side of the field and taking a 2-1 lead on goals by Cesar Saenz and Fernando Barron.

&#8220;SHAPE is a powerful team that woke up the second half and played a half of beautiful soccer,&#8221; Blankenship wrote in a Saturday e-mail. &#8220;AFNORTH is a young team that improved throughout the game and will correct the midfield mistakes that proved costly at the start of the second half. (AFNORTH&#8217;s) Pohl and Chris Eden will be two strikers that opposing teams will struggle to contain.&#8221;

Noteworthy&#8212;Pettcelo-Mantoverdi saved penalty kick at 20-minute mark of second half.