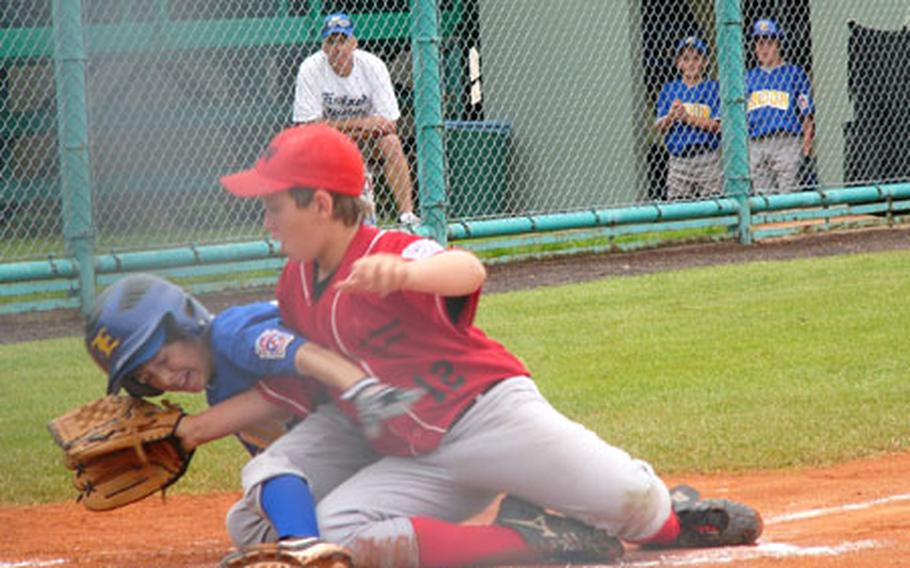 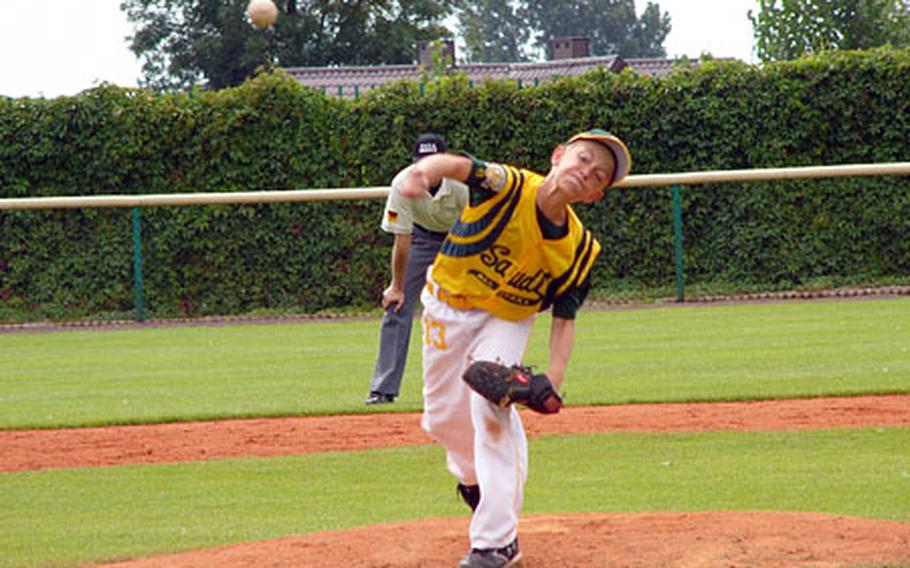 Winning pitcher Chris Beyers of Saudi Arabia fires the ball Saturday during his 6-0, four-hit shutout of Dubai in the semifinals of Little league Baseball’s Transatlantic Regional in Kutno, Poland. Beyers was forced to leave the game with two out in the final inning when his pitch count reached the limit of 85 imposed by Little league Baseball. Saudi Arabia will play London in Sunday&#39;s title game. (Rusty Bryan / S&S) 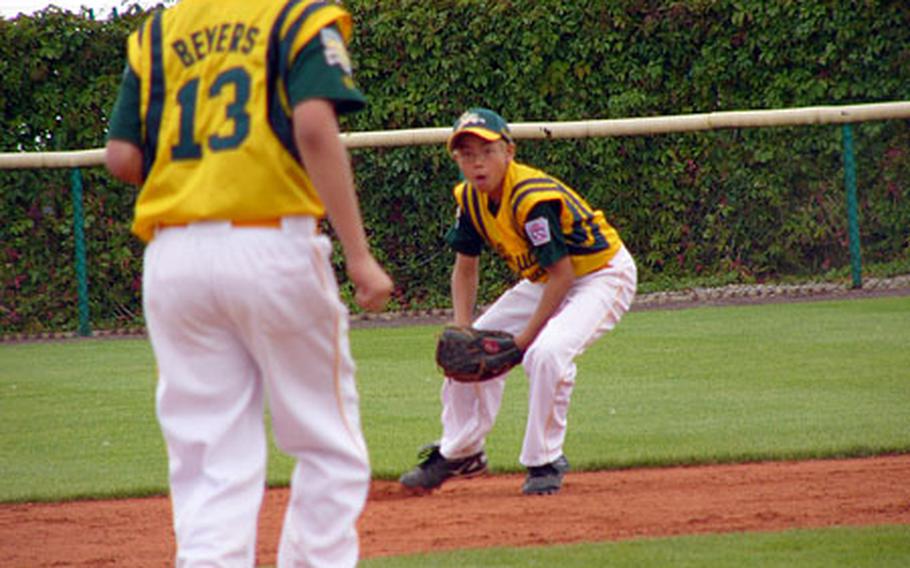 Saudi Arabia shortstop Beau Branton backs winning pitcher Chris Beyers (13) by scooping up a grounder and firing to first during the seven-time defending champions’ 6-0 victory over Dubai in the semifinals of the Transatlantic Regional in Kutno, Poland. Saudi Arabia will face London in Sunday&#39;s final. (Rusty Bryan / S&S) 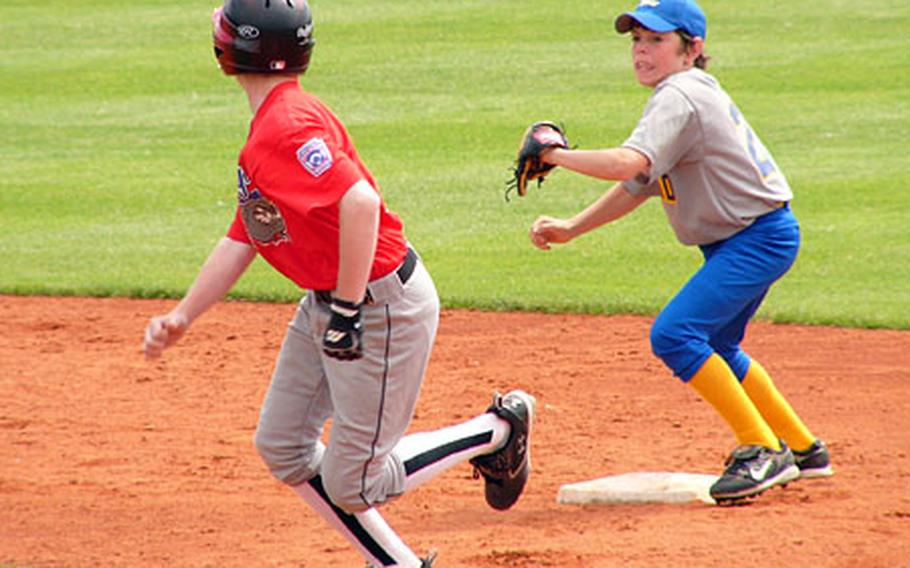 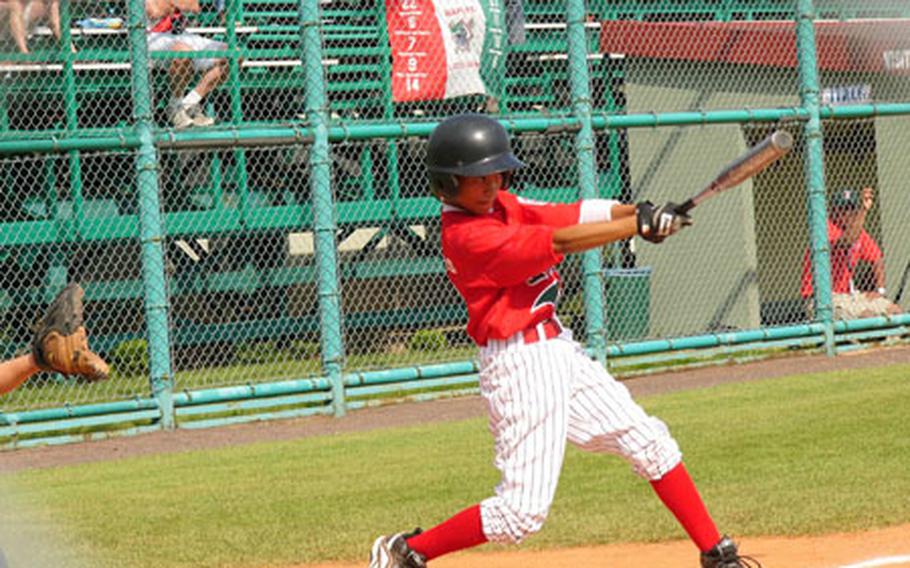 KUTNO, Poland &#8212; England champion London struck for six sixth-inning runs Saturday, then held on for a 9-6 victory against the comeback specialists from Stuttgart-Wiesbaden in a semifinal game of Little League Baseball&#8217;s Transatlantic Regional.

The victory set up a rematch Sunday of last year&#8217;s final between London and seven-time defending champion Saudi Arabia. It took some great relief pitching by London&#8217;s Cam Opp to arrange the matchup.

Opp came in after the Bulldogs, who were down 9-1 when the bottom of the sixth began, had scored five runs with no outs off London starter and ace Timmy Davison and had two runners on base.

With each batter he faced representing the game-tying run, Opp retired C.J. Kellogg on a pop to first, watched Joey Walter run down Scooter Bynum&#8217;s line drive to center and induced Joseph &#8220;Fish&#8221; Patrick to fly out to left.

Germany issued four walks, one of them intentional, and missed a double-play opportunity during England&#8217;s game-breaking sixth. Germany pitchers gave up nine free passes, and six of the runners came in to score.

The Bulldogs were upset by London&#8217;s rally, but did not give up. The first six batters reached safely, five on solid hits.

Clay Dudek led London with two doubles and two singles in four at-bats. Dudek is 9-for-16 in the tournament and looks to extend that success Sunday.

Lakenheath&#8217;s J.T. Green, a member of last year&#8217;s London runners-up, took heart from his team&#8217;s 7-4 pool-play loss to Saudi on Wednesday. Those were the only runs Saudi has yielded in five games here.

Saudi Arabia 6, Dubai 0:In Saturday&#8217;s first semifinal, Chris Beyers, the Saudi starting shortstop in the defending champions&#8217; previous four games, gave the rest of the pitching staff a good rest. He faced all but one Dubai batter, allowing only four hits.

He did, and the Saudi juggernaut, idle on Friday, will have ace Ted Fitzmaurice ready to pitch in the finale. Fitzmaurice, who shut out Stuttgart-Wiesbaden on three hits Monday, hasn&#8217;t pitched since he retired all four batters he faced Thursday.

The Saudi power game was on display again Saturday as Otis hammered his second home run of the tournament &#8212; his team&#8217;s eighth here &#8212; in the first inning off Dubai starter Zeno Stone. The three-run blast to left center gave Saudi a four-run lead, more than enough for Beyers.