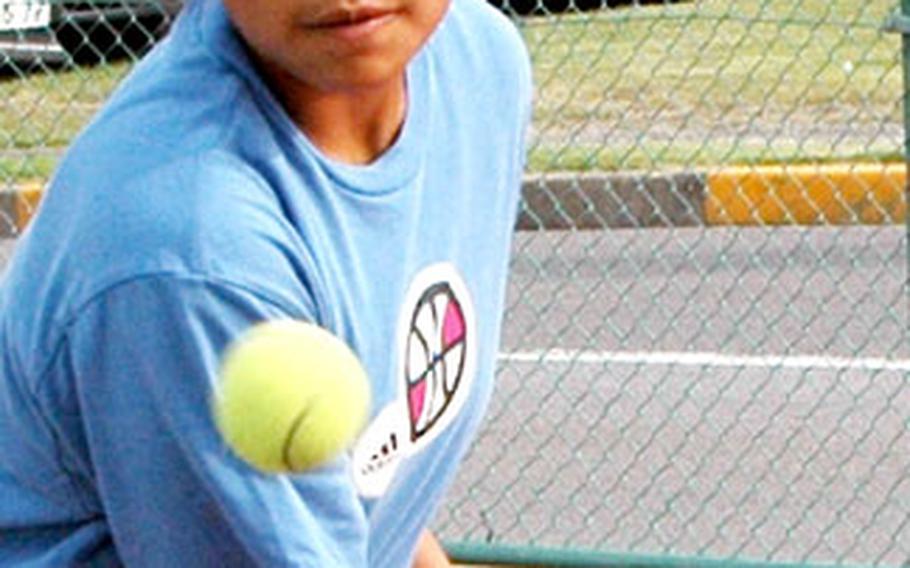 E.J. King sophomore Kristia Suriben has not lost a set in a singles match this year and is undefeated in doubles with partner Jemari Nimedez. (Greg Tyler / S&S)

Head down, walking off the court at Kadena Air Base&#8217;s Risner Tennis Complex on a scorching day last November, Kristia Suriben felt as if she&#8217;d been run over by a bus.

The then-freshman from tiny E.J. King High School entered last year&#8217;s Far East tournament as Japan&#8217;s No. 1 seed, but her baseline game did no good in an 8-1 thrashing by Kadena senior Lori Kanikkeberg in the quarterfinals. It was the only singles match Suriben played that week.

One year later, an improved Suriben says she&#8217;s returning to next month&#8217;s Far East tournament on Guam with a purpose: To try to become the first Department of Defense Dependents Schools-Japan player to win a gold medal in the tournament&#8217;s 27-year history.

Suriben has given every indication that she&#8217;ll play more than one Far East match this time. In six singles matches against DODDS-Japan opposition, Suriben hasn&#8217;t dropped a set. Teaming with Jemari Nimedez, Suriben was unbeaten in doubles in the first month of the campaign.

She balances a hectic tennis schedule &#8212; in the past two weeks, she&#8217;s played matches in the Tokyo and Osaka areas &#8212; with a class workload that includes Honors English and Honors History. A 4.0 grade-point average student, Suriben is involved in Junior ROTC and National Honor Society, serves as the sophomore class president and is eyeing a career as a military officer.

She&#8217;s a three-sport star and made the All-Far East team in February&#8217;s Class A basketball tournament. Suriben was also selected to All-DODDS-Japan teams in basketball and softball.

Suriben is a different player now than the one who camped on the baseline, trying to frustrate her opponents into making mistakes. During the summer, she played against her father, Cesar, a Navy senior chief petty officer who plays local tournaments on base.

These days, Suriben is the aggressor.

Net games are more common among DODDS boys players in Japan, while girls tend to stay on the baseline. That makes Suriben a rare commodity, Hindie said.

Suriben feels her toughest challenge has been Cao, even though Cao lost 6-0, 6-0 in their matches this year. Frances Santiago of Zama American, who lost to Suriben 6-1, 6-1, is viewed as another threat.

Kendall feels Suriben can become the same type of player as gold medalist Amy Lopes, who transferred from Kadena to Arizona last year.