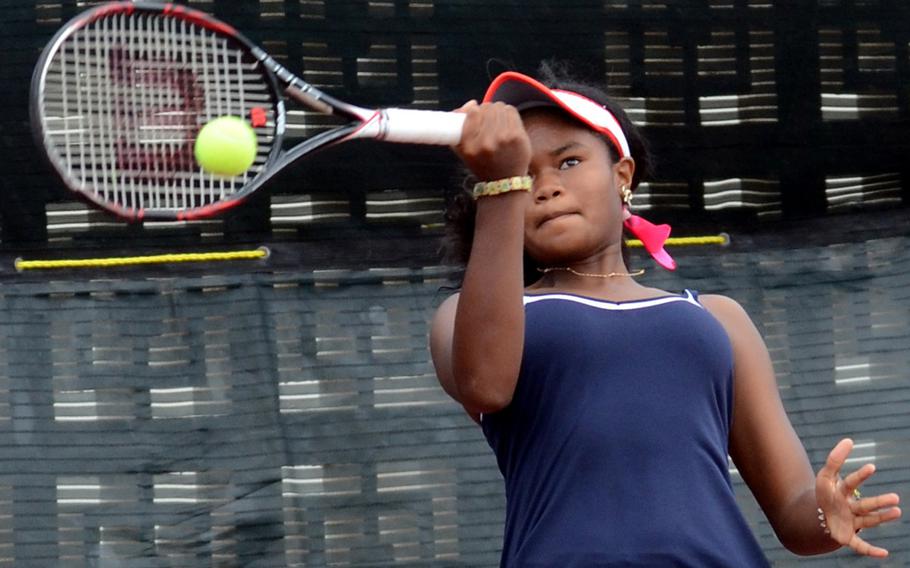 Buy Photo
Guam High senior Chloe Gadsden closed out her Far East tournament career with her third straight girls singles title on Nov. 7, 2013. And she did it out of season: Guam's high school tennis season is in late winter. (Dave Ornauer/Stars and Stripes)

Buy Photo
Guam High senior Chloe Gadsden closed out her Far East tournament career with her third straight girls singles title on Nov. 7, 2013. And she did it out of season: Guam's high school tennis season is in late winter. (Dave Ornauer/Stars and Stripes) 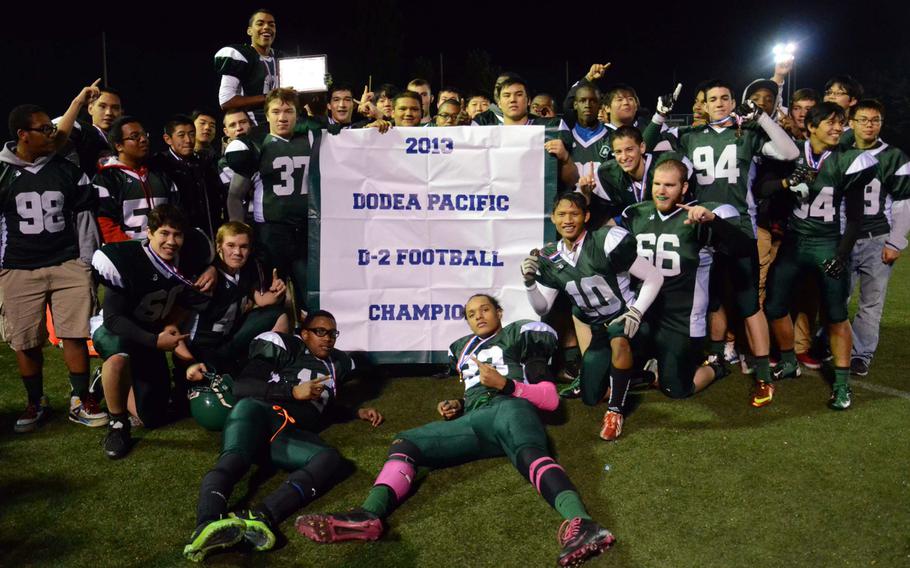 With their 33-12 win over Robert D. Edgren, Daegu High's Warriors captured their third D-II title in four years; they're now 3-2 overall in D-II finals dating back to 2007. The Eagles fell to 3-3 in their record six D-II title-game appearances. () 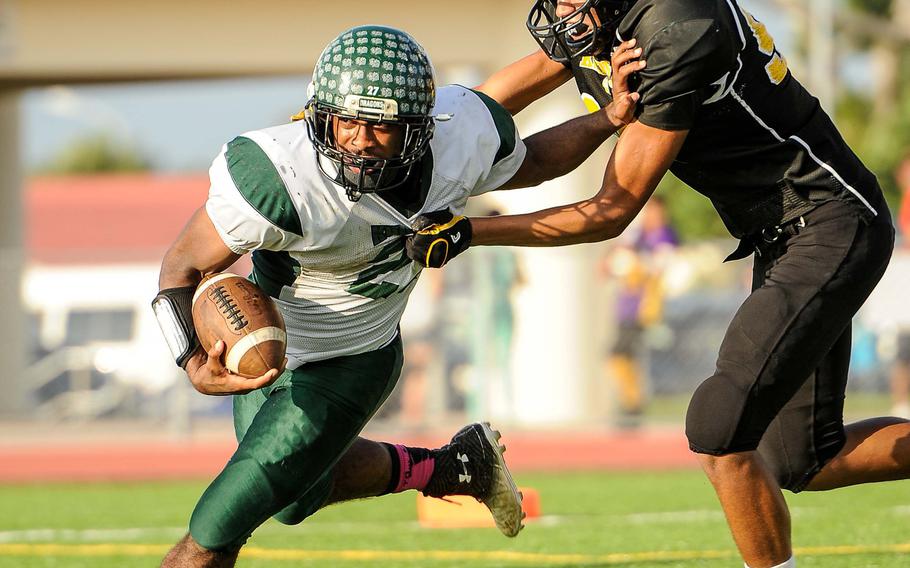 Kubasaki Dragons running back Tyshon Butler's 146 yards and a touchdown on 11 second-half carries were crucial to the Dragons' capturing the school's second Far East Division II football banner with a 34-31 overtime win over Kadena. () 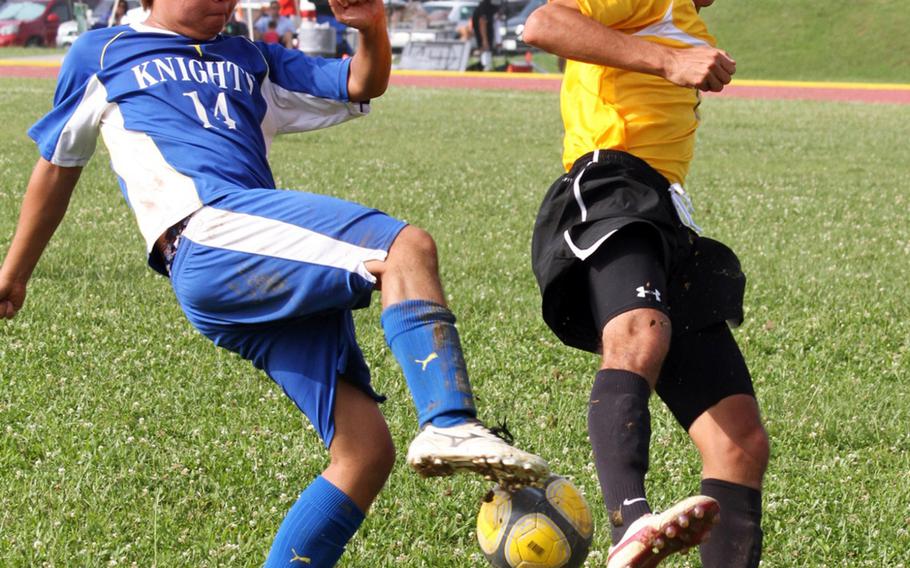 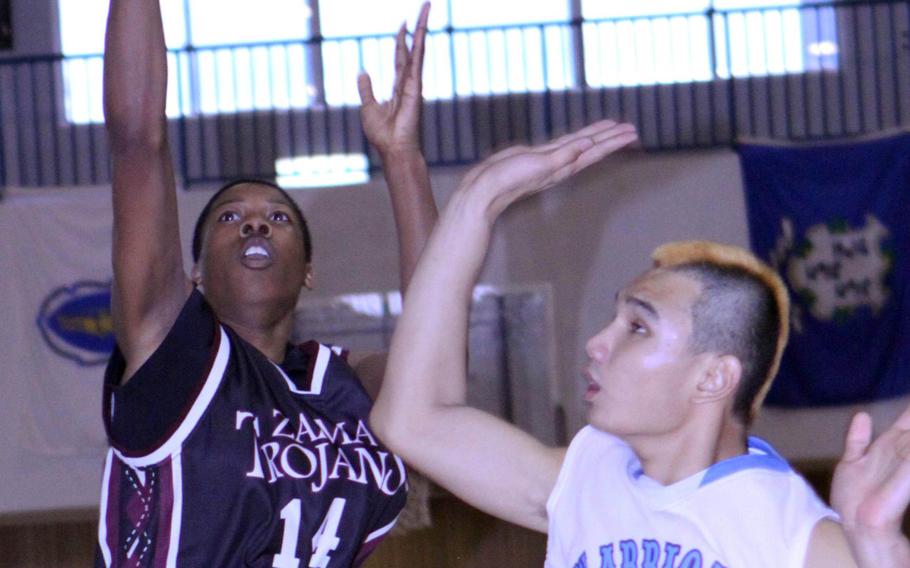 A dramatic change to the way Pacific high school sports will be conducted now and into the future occurred last month, when the new DODDS Pacific director, Dr. Linda L. Curtis, issued a memorandum outlining the change to DODDS Pacific administrators and athletics directors.

The schedule change puts caps on the number of games and competitive events allowed for each sport.

The cuts began with basketball and wrestling, limited to 16 and eight games/meets each during the regular season. The limits were imposed in light of what DODDS officials termed “budget realities,” and also to bring DODDS Pacific more in line with DODDS Europe and maximize classroom time for students.

The directive also cuts DODDS funding for non-DODDS-sponsored events and puts limits on teams and students participating in those events, such as schools providing buses to and from airports for teams.

“We have discovered that in some instances and locations, our schools were going beyond the spirit and letter of our administrative guidance with regard to funding travel and other expenses for some unofficial co-curricular activities,” Curtis’ memo stated.

Due to the nature and significance of the changes, they have been named Stars and Stripes Pacific high school sports Story of the Year.

In addition to capping the number of games in a season, schools may play a maximum of one or two games/events per week, depending on the sport. An interval week will be inserted between seasons to help students playing multiple sports recuperate and catch up on schoolwork missed during a season-ending Far East tournament.

Several coaches expressed unhappiness with the changes, one of them stating the changes were made “without the kids in mind.”

“It will eventually lead to too much free time, teen-agers looking for things to do, idle hands and lessen our school spirit and pride (in) our individual schools,” Nile C. Kinnick boys basketball coach Robert Stovall said.

“Change, no matter how sensible and appropriate, often requires an adjustment period and we need to work together as a team to support students and parents with these changes,” Curtis’ memo stated.

Five days before Curtis’ announcement, Kubasaki and Kadena engaged in an overtime thriller in the Far East Division I football title game. DeQuan Alderman’s 2-yard plunge rallied the Dragons to a 34-31 win over the Panthers in the first meeting between the Okinawa powers for a D-I title. Tyshon Butler fueled Kubasaki with 146 yards and a TD on 11 carries in the second half and Jarrett Mitchell capped his Kubasaki career with 128 yards and two scores on eight carries. The D-II title game featured far less drama as Caleb Page accounted for four touchdowns in Daegu High’s 33-12 romp over Robert D. Edgren.

Tenley Getschman’s line single to center scored Sierra Lee from third and gave Kinnick, after three near-misses, its first Far East D-I softball title with a 2-1 win over Kadena. The RBI single made a winner of Kelly Osterbrink, a transfer right-hander who proved to be the final piece of the title puzzle. In D-II, Daegu High poured eight runs across in the fourth, rallying from 4-0 and 6-4 deficits to beat E.J. King 15-10 for the school’s first Far East title.

February was a time for long title droughts to be broken in Far East basketball tournament play. Zama American won its first D-II title and first in tournament play since 1963, edging St. Paul Christian 28-25 in the final. Morrison Academy of Taiwan downed E.J. King 67-50 in the girls final, giving the Mustangs their first D-II title since 2000. Another band of Mustangs, the American School in Japan, won their first boys D-I crown since 1983, downing Father Duenas Memorial of Guam 61-49. And Kinnick’s girls ended a 12-season dry spell, downing ASIJ 45-32 in the title game.

Twice before, Kadena’s cross-country team had won every individual and team award there was to win during Far East meets. But the 2013 meet saw a team-relay first: No school had ever won the first four relay pairs, finish 1-2-3-4. That was the case last month when the Panthers won every last event, led by repeat gold-medal winners Ana Hernandez and Andrew Kilkenny.

Kubasaka is the most decorated program of any school in any Far East tournament in any sport. The Dragons added to their record title haul, 23, capturing the Far East D-I wrestling individual-freestyle and dual-meet team titles behind gold-medal winners Steven Walter, Austin Cyr, Daniel Mora and Fred Suniga. Zama American, led by gold winners Chad Wilder and Mitchell Harrison, swept the D-II titles.

It’s become a rite of passage at Far East tennis, a player named Gadsden winning the girls singles title. It happened again last month when senior Chloe Gadsden capped her run at Kadena’s Risner Tennis Complex with her third straight gold medal, on the heels of her older sister Amber winning in 2010. And Gadsden did it out of season; Guam’s tennis season occurs in late winter.

Rather than regress after losing three players who combined for 100 goals, Matthew C. Perry continued its recent run of success, downing Osan American 3-1 for its third Far East soccer D-II title in five years and second in a row, behind two-time MVP Gaku Lange (52 goals). Osan’s girls got 40 goals from freshman Ebony Madrid and the Cougars blanked M.C. Perry 4-0 for a Pacific-record eighth D-II title. Coach Michael Callahan returned to Kadena’s boys bench and picked up where he left off in 2006, winning the D-I title 1-0 over Christian Academy Japan. And ASIJ took its third D-I girls title, shutting out Kubasaki 2-0.

It could easily be argued that Kubasaki won the Far East D-I baseball title the day before the final, when Jared Paul’s RBI double helped the Dragons edge ace Justin Novak and ASIJ 1-0 in the semifinal game. The next day, Kubasaki pounded five St. Mary’s International pitchers for 24 hits in a 19-1 title-game romp. In a much-closer championship outcome, Edgren scored three times in the fifth to rally past Zama 4-3 for the Eagles’ second straight D-II title.