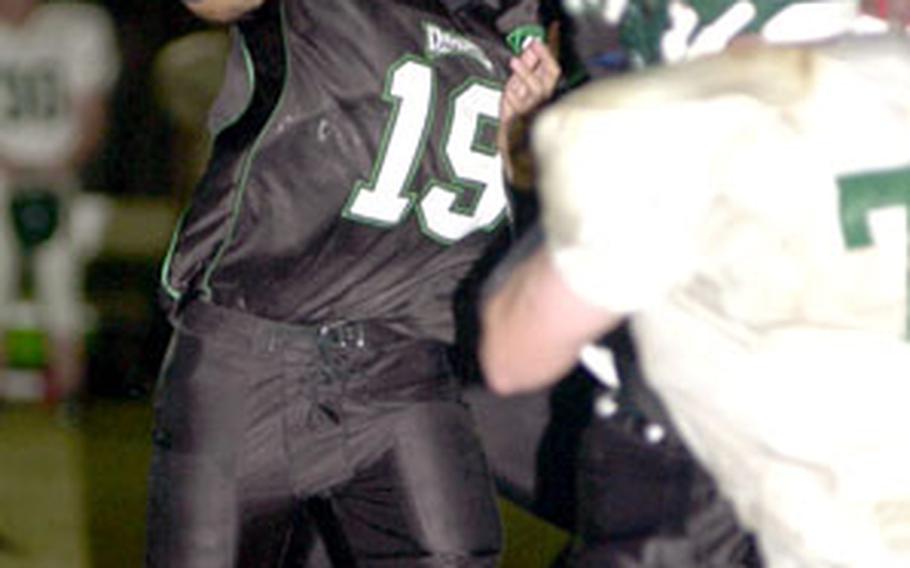 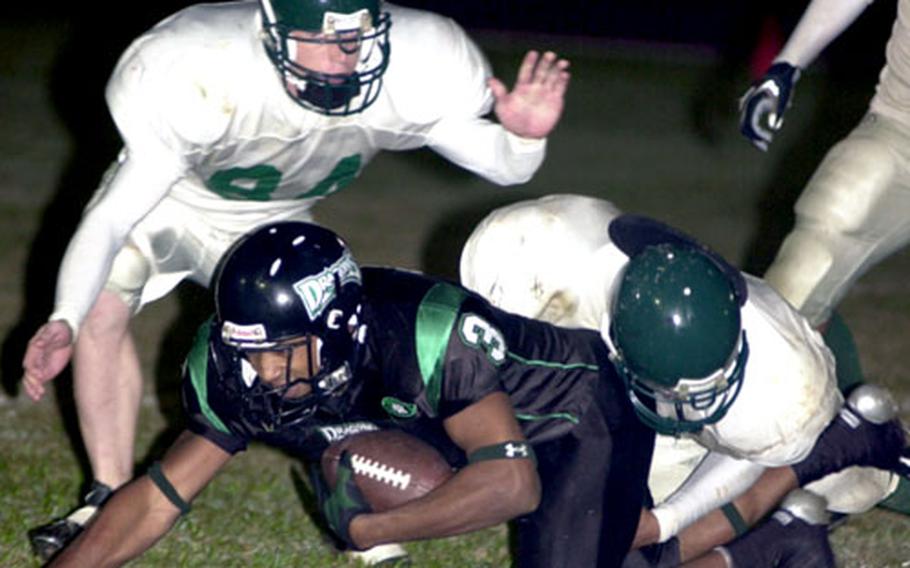 Kadena Dragons receiver Tarrick Jackson is wrestled down by defenders Andrew Cimonetti and Stephen Ellis of the Courtney-Hansen Titans. Jackson caught 4 passes for 66 yards and a touchdown. (Dave Ornauer / S&S) Tyrell McClora gave the Dragons just what they needed, blocking a punt and falling on the ball in the end zone for a touchdown, and Kadena scored seven unanswered TDs en route to a 45-7 victory over the Courtney-Hansen Titans and its second straight Okinawa Football League title in the Habu Bowl on Saturday at Mike Petty Stadium.

Kadena&#8217;s defense stiffened and on fourth-and-7 at the Titans&#8217; 33-yard line, Courtney-Hansen&#8217;s Jesse Hampton lined up to punt. McClora charged in from the left side to block it, and a gaggle of players from both sides chased it down. McClora covered it just past the goal line.

&#8220;That turned the momentum over to them [Dragons] and we never recovered,&#8221; said Titans coach Rodney Best, whose team reached the title game with a 7-6 upset of Foster-Futenma. &#8220;It took away our mental edge. They pride themselves on scoring points off of turnovers, and once they did that, they were in control. They were in command.&#8221;

Coming off a 69-0 semifinal victory over Kinser, the Dragons&#8217; offense found itself after McClora&#8217;s big play and rolled to an outcome much different from the teams&#8217; two previous close encounters. Kadena won those contests 28-18 and 13-6.

Quarterback Adam Hendrickson did most of the damage, going 12-for-22 for 195 yards, including touchdown passes of 13 yards to Eric Lazenby, 6 to Tarrick Jackson and 5 and 41 yards to Jermaine Baker.

Baker, who had been deployed the previous six weeks, returned in style, catching five passes for 94 yards, gaining 75 yards on five returns and intercepting a pass.

Johnson paced the Titans with 59 yards on 11 carries, and David Burnell gained 136 all-purpose yards. But Courtney-Hansen quarterback Derek Nicholas was harried and harassed all night; he was sacked five times, with defensive end Kevin Carter racking up four to finish the season with a league-leading 11.