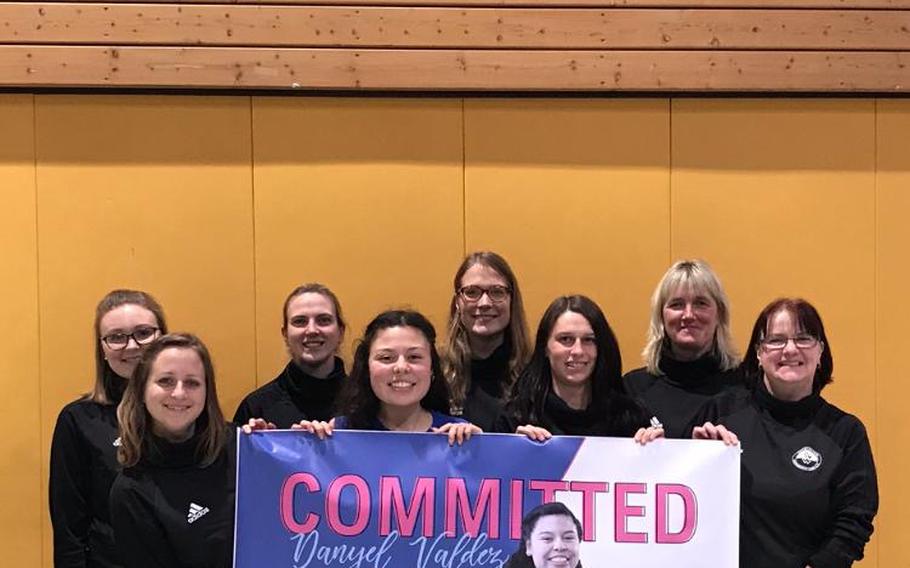 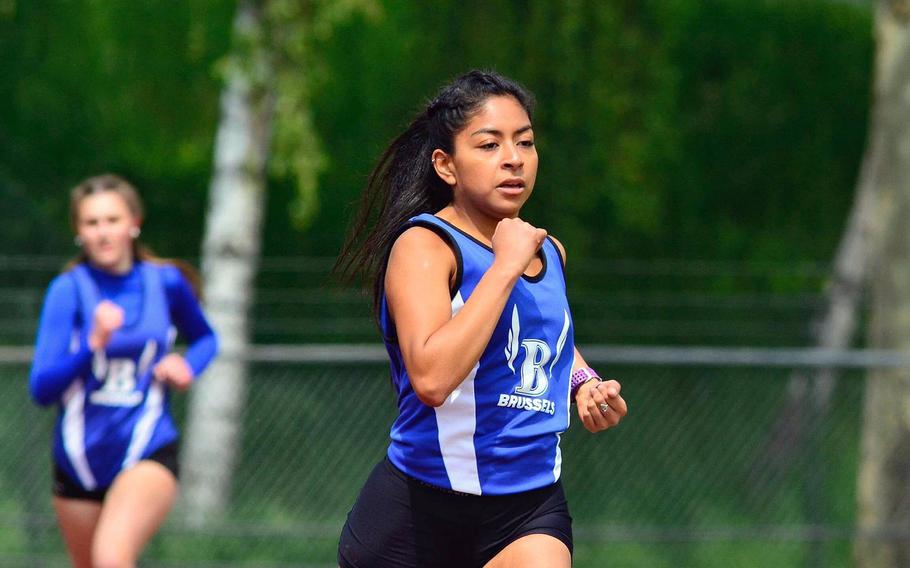 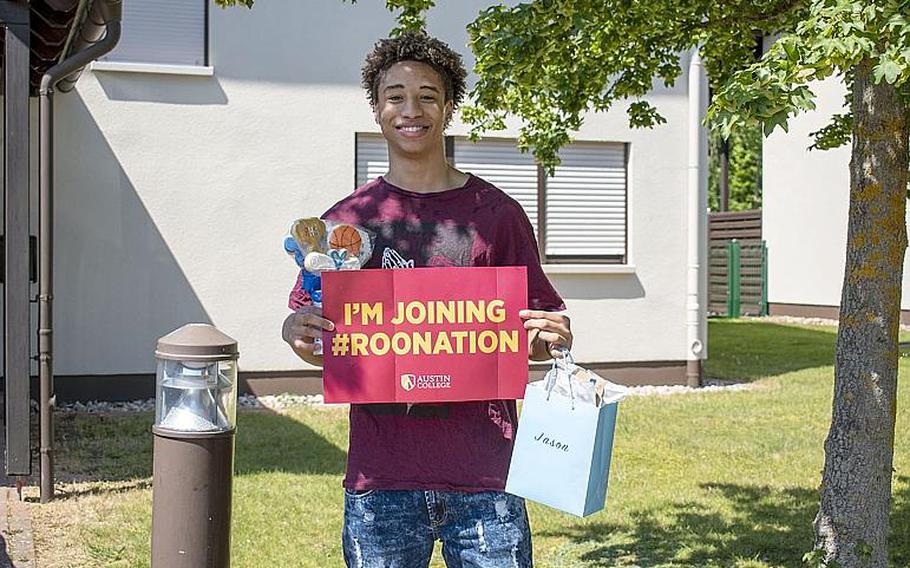 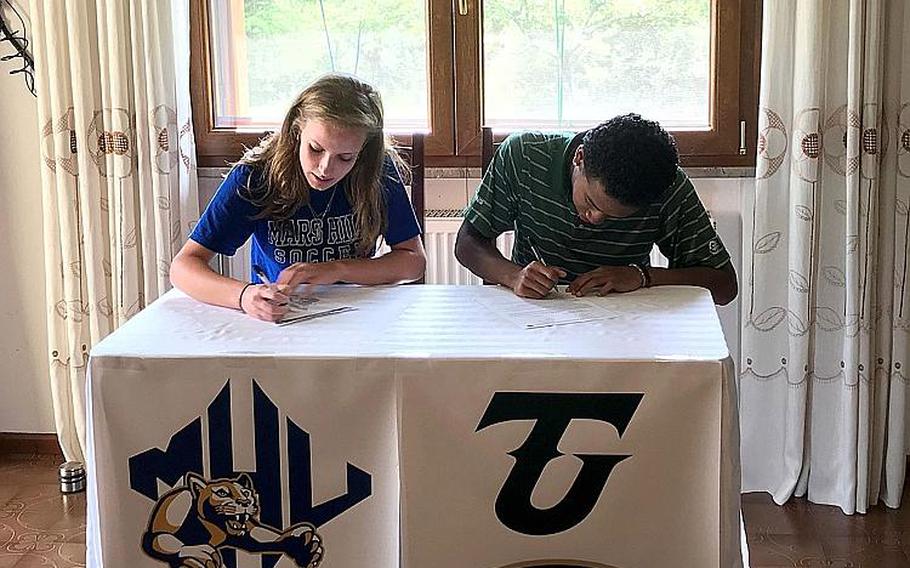 Aviano High School seniors Danielle Kandle, left, and Donavin Robinson sign letters of intent to play NCAA sports at a ceremony in May 2020. Kandle will play girls soccer at Mars Hill University in North Carolina, while Robinson will compete in track and field at Tiffin University in Ohio. (Tina Kandle) 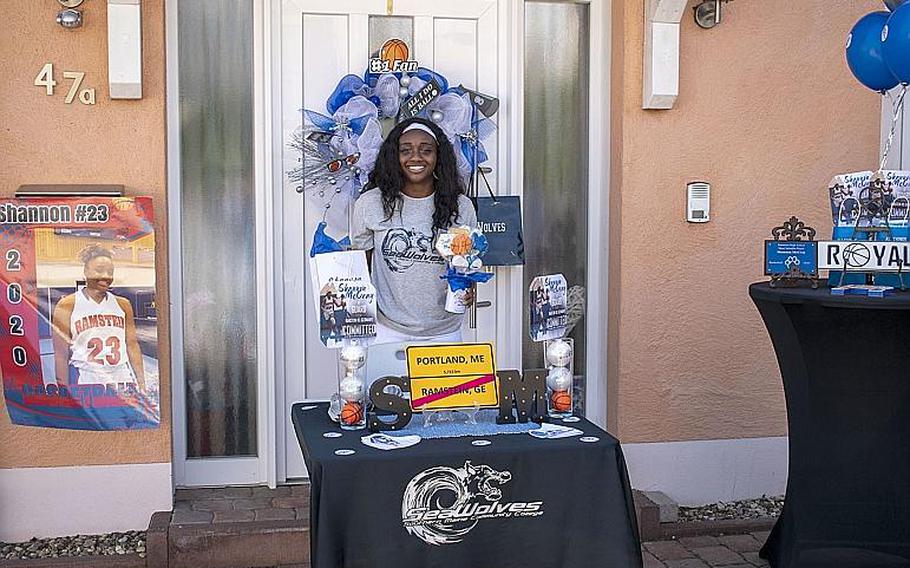 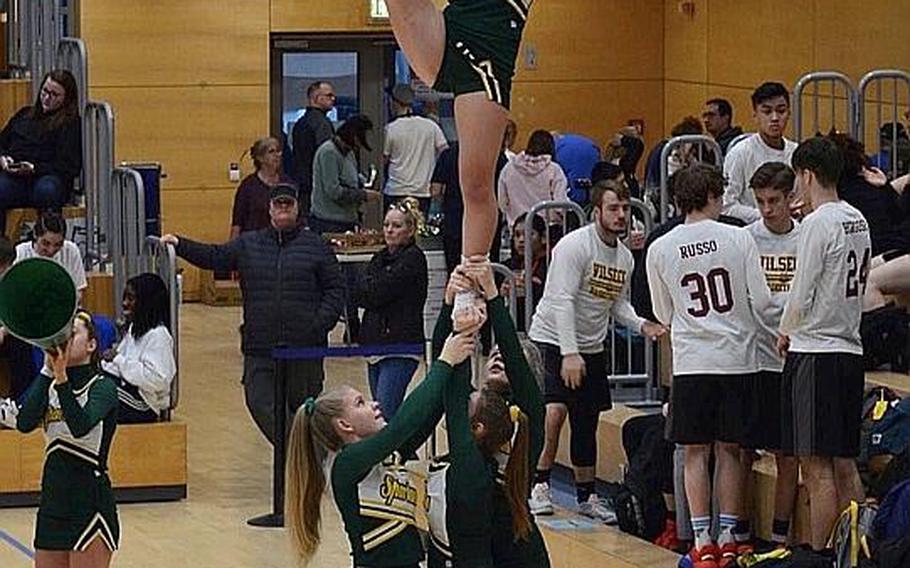 SHAPE senior Samantha Macalintal performs for the Spartans at the DODEA-Europe basketball tournament in Wiesbaden, Germany. Macalintal will join the cheer squad at the University of West Florida next school year. (Heather Rhine)

Student-athletes from DODEA-Europe are moving on from coronavirus-affected senior years and looking forward to promising careers at the collegiate level.

DODEA-Europe canceled its 2020 spring season in response to the pandemic, costing senior soccer, baseball, softball and track and field athletes their final prep season and one last opportunity to impress. Still, spring-focused stars are well-represented among the DODEA-Europe athletes extending their sports careers beyond high school.

Montgomery's career has taken some remarkable turns in recent years. Having already established himself as an All-Europe performer, Montgomery spearheaded Spangdahlem's shift from conventional 11-man football to DODEA-Europe Division III's six-man variety, leading the Sentinels to the 2019 small-school championship. But that unorthodox brand of overseas football affected Montgomery's initial appeal to stateside colleges, and the coronavirus pandemic canceled the summer workout opportunities usually available for prospects to enhance their recruiting status.

A timely offer from Division I Fordham settled the issue for Montgomery, though it arrived with a fresh challenge to overcome. The school, and the Patriot League athletic conference to which it belongs, has suspended its fall athletics season due to the pandemic.

Goldfein placed third overall in the 2019 DODEA-Europe championship race and was an All-Europe performer each of the last two seasons at Brussels. She boasts a personal record time of 19 minutes, 52 seconds.

Kaiserslautern Raiders standout Philipp Rimmler will continue the Raiders’ soccer legacy this fall when he suits up for NCAA Division I program Wright State. Rimmler was a key player on Kaiserslautern’s back-to-back European championship squads in 2017 and 2018. Another recent Raider soccer alum, Alexander Dexter, currently plays for Division I Pittsburgh.

Kaiserslautern soccer will also send Paola Zorrilla and Ryan Ward to the collegiate level. Zorrilla has signed with the University of Dubuque, an NCAA Division III program in Iowa; Ward is bound for NAIA program Tabor College in Kansas.

Aviano The Saints will send a student-athlete from each category of spring sports on to college.

Nick Smith, the leader of Aviano’s breakthrough 2019 championship baseball team, has signed on with NCAA Division III school Waynesburg University in Pennsylvania. Smith was an All-Europe mainstay in baseball and also represented Aviano in football, volleyball and wrestling.

On the soccer pitch, Saints senior Danielle Kandle will continue her career at Mars Hill University, an NCAA Division II school in North Carolina. Kandle was a 2019 All-Europe selection, leading the Saints to a strong third-place finish at the European tournament.

Gragg was selected as the Stars and Stripes softball Athlete of the Year in 2019 after striking out 119 hitters in 61 innings and producing a .415 batting average and 22 RBI at the plate.

Ramstein The Royals will send six seniors across three sports to college programs.

A dominant pitcher and all-around standout on the diamond, Harris earned first-team All-Europe honors in the spring of 2019, leading the Panthers to a berth in the Division I European championship game.

Multiple-sport Panther star Rachel Johnson will play collegiate softball at Concordia University, an NAIA program in Oklahoma. Johnson represented Stuttgart in volleyball and basketball in addition to her All-Europe career on the diamond.

Sam Schudel will move on from the Panther basketball team to play hoops for NCAA Division III school Grove City College in Pennsylvania. Stuttgart senior Mia Sanders, a veteran of the Stuttgart Piranhas swim team, is set to compete in swimming and water polo at Sacramento City College of the California Community College Athletic Association.

SHAPE Samantha Macalintal will graduate from the Spartan cheer squad to the football and basketball cheer team at the University of West Florida. The Argonauts compete at the NCAA Division II level.