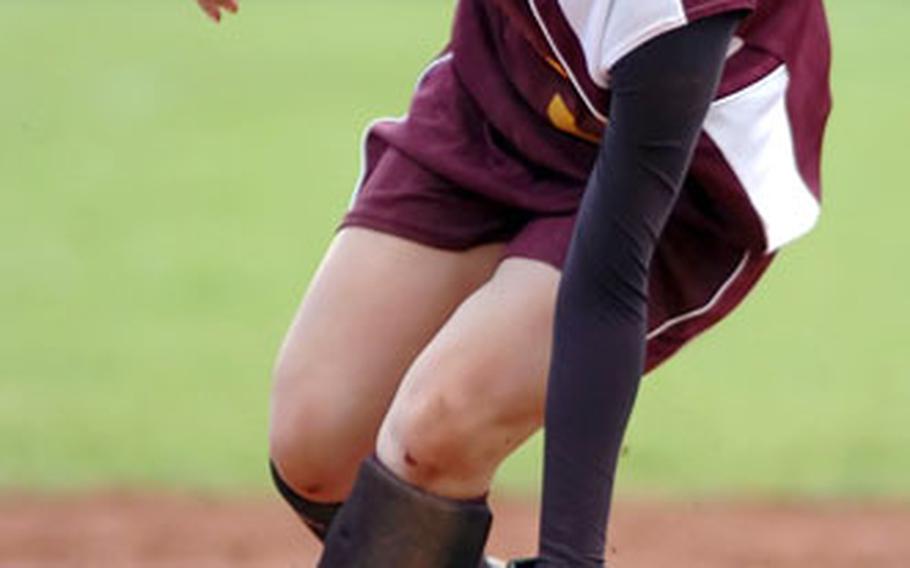 Unlike the Division I slugfest that unfolded on an adjoining field, the game was tight throughout. It was called because of rain in the bottom of the fifth inning, with Baumholder leading and batting.

Rota won an earlier qualifying game Saturday that drew it even with Alconbury and London Central at 2-2 for the tournament. Based on a scoring differential formula for the tournament, it was Rota that got the nod to face Baumholder for the title.

Baumholder scored a run in the bottom of the first inning, but for much of the early going it was a pitchers&#8217; duel between Baumholder&#8217;s Jasmine Valazquez and Rota&#8217;s Hope Foreback.

Rota broke through against Valazquez with two runs in the top of third, giving it a 2-1 lead. Keying the rally was Stephanie Shapiro, who went 2-for-3 and scored two runs.

Baumholder had a chance to score in the bottom of the inning, but wound up stranding runners on second and third base.

That didn&#8217;t happen when the Lady Bucs came to the plate in the fourth. On the strength of a few walks and a couple of hits, Baumholder managed to squeeze across four runs. That proved to be enough, especially with the way Valazquez was throwing.

Rota pushed across two more runs in the fifth, but that proved to be the end of the scoring. The game was delayed by rain with Baumholder up, and then called by umpires, who grew concerned with the weather when lightning and hail appeared.

The Baumholder players, waiting in a nearby gym for the rain to pass, could be heard belting out celebratory screams when the game was officially called.