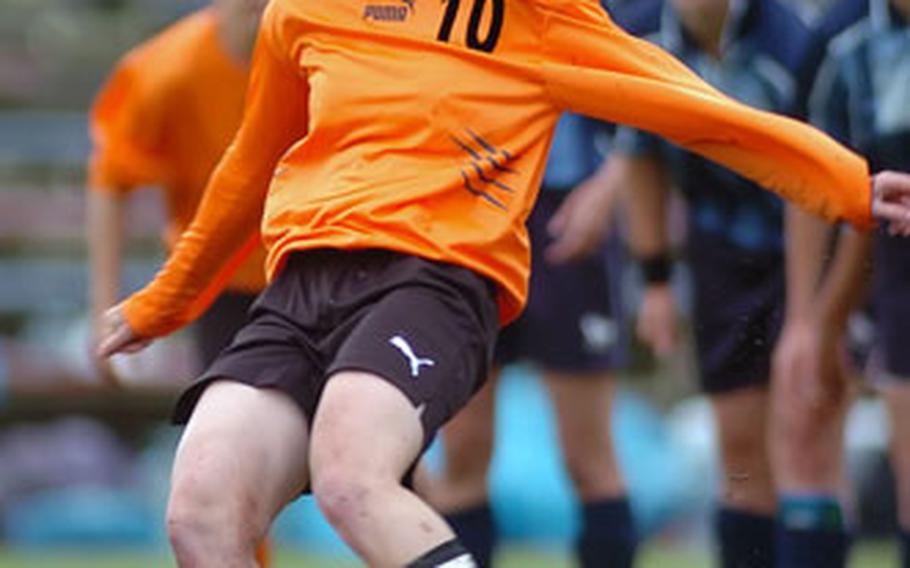 Patch’s Kylie Marchant scores on a penalty kick to put her team ahead for keeps at 2-1 in the DODDS-Europe girls Division II championship game. Patch defeated Aviano 3-1 to win the title. (Raymond T. Conway / S&S)

Patch’s Kylie Marchant scores on a penalty kick to put her team ahead for keeps at 2-1 in the DODDS-Europe girls Division II championship game. Patch defeated Aviano 3-1 to win the title. (Raymond T. Conway / S&S) 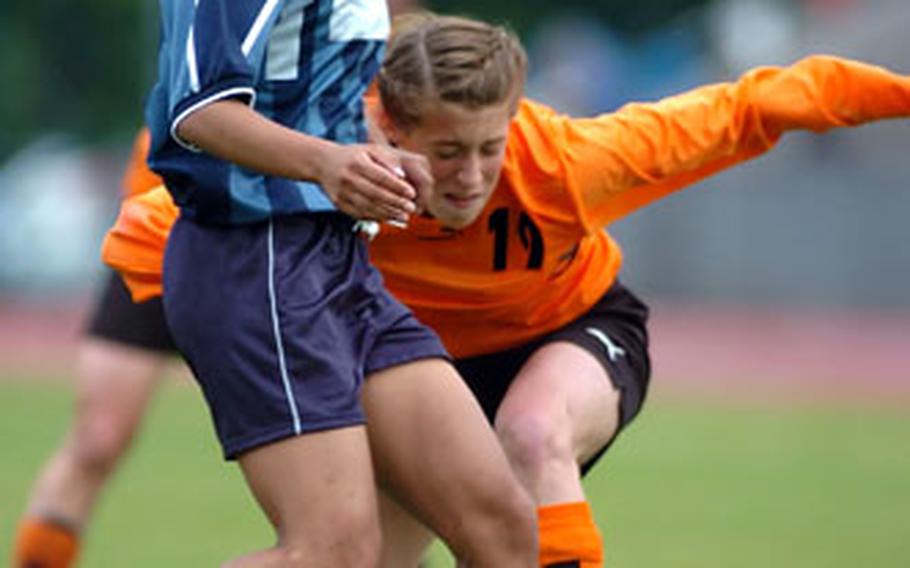 RAMSTEIN AIR BASE, Germany &#8212; After the rain cleared Saturday afternoon in the Division II girls soccer championship, a rainbow appeared &#8212; along with three Patch goals.

After a scoreless first half, Aviano sophomore Anna Schrader scored on a booming kick in the first minute of the second half. Almost immediately after the score, the game was stopped for about an hour as a thunderstorm with lightning and hail swept across the pitch.

A tent behind the stands went flying up, over and onto the stands as a torrential downpour hit. Fans and players retreated to the Ramstein High School gym to wait out the storm.

When play resumed, Patch tied the game when Kate Frasca booted in a goal from a scrum of players crowded around the net.

Around the 55-minute mark, Patch junior Kylie Marchant made good on a penalty kick following a handball foul by Aviano.

Patch kept applying that pressure. Aviano goaltender Cheri McNeely made a great jumping save to prevent Patch from padding its lead around 60th minute.

But about two minutes later, sophomore Kylee Hogan got Patch the insurance goal it was looking for by blasting home a shot.

Now that the Lady Panthers have repeated as champions and their season is over, players will enjoy something they have not had all season.

The Patch players signed a contract with coach Tom Manuel that they would not drink soda during the season. The team is superstitious and follows stringent pre- and post-game routines. As the team did its routine cool-down lap following the game, players could be heard quietly singing Queen&#8217;s &#8220;We are the Champions.&#8221;