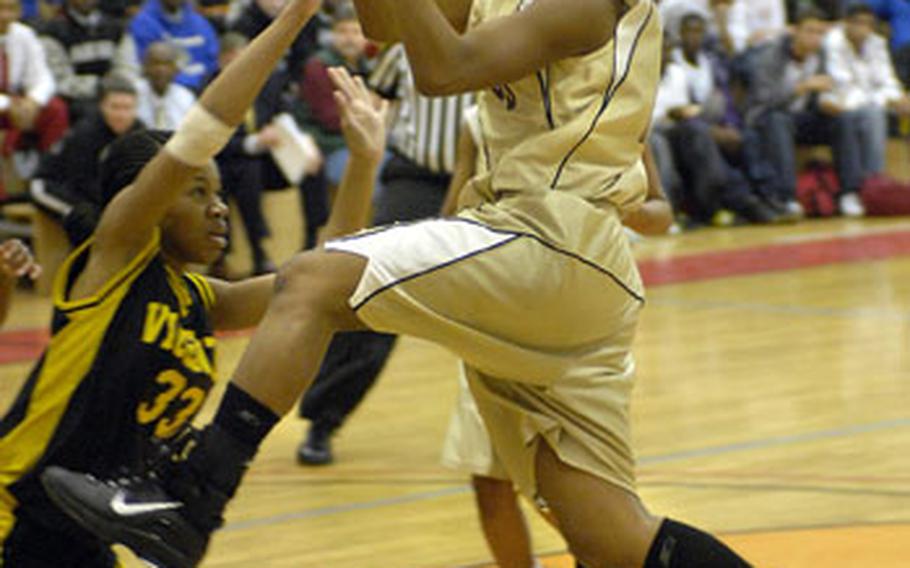 In the high-turnover world of high school sports in Europe, the girls basketball season that tips off Friday is the DODDS-Europe version of "The Day the Earth Stood Still."

Seventy percent of last season&#8217;s All-Europe first team returns, along with half of the second team. In an environment where military moves and drawdowns stir up the player pool every season, that&#8217;s highly unusual.

Adding to the familiar feel of the new season is the location of those All-Europeans. Of the seven first-teamers back, two each will be suiting up for defending European champions. Two-time first-teamer Latanya Wilson (seven points per game) and &#8217;08 choice Kiara Sanchez-Herrera (12 ppg) will anchor Kaiserslautern&#8217;s run at a second D-I crown, and sophomores Veronne Clark (15.6 points, five assists, 4.4 steals per game) and Elizabeth Styles (19.8 points, 4.8 steals per game) are among the eight returners who have fans of D-III champ Baumholder eager to get the season started.

All that experience in Baumholder has caught the eye of K-town coach Corey Sullivan, whose Lady Raiders will face the Lady Bucs twice in Region II play.

"To be honest, I think Baumholder may have the best girls basketball team in Europe," Sullivan wrote in an e-mail.

Sullivan will get a chance to test his estimate the week before the European tournament when his Lady Raiders are scheduled for a home-and-home showdown.

"I think our region," he concluded, "will definitely &#8230; make us tougher for the tournament."

Hicks already has helped the Lady Lions to a European volleyball crown, but experience might prove the difference-maker for K-town. The Lady Raiders dress six seniors in addition to Wilson and Sanchez-Herrera.

"We have eight total seniors this year, all having had varsity experience at K-town," Sullivan wrote, "which makes things nice to start out the year."

Baumholder, too, probably will benefit from Region II&#8217;s stiff tests. The Lady Bucs return the kind of talent &#8212; eight of the top 10 from last season &#8212; according to Hollenbeck, that figures to benefit from the competition.

"Styles, (all-region forward Katrina) Alsup and Clark are back for another season," coach Carter Hollenbeck wrote, "as well as Jasmine Thompson, who was a starter at forward last year, and Megan White, who is a six-foot center."

Barring cataclysmic changes, the battle in D-III will be for second place.

That&#8217;s a far cry from Division II, where European champion Mannheim bid goodbye to its two All-Europeans. Coach Adrian Crawford opens the season teaching his system to nine new players, which would seem to leave the door open to &#8217;08 runner-up Aviano, led by All-European Alyssa Lane (22 points, 14 rebounds per game); Naples, which will benefit from another season from All-European Valentina Lee (24 ppg); and SHAPE, which returns All-European Ebonee DeVos, who averaged 14.3 points and 7.1 rebounds per game.

Kaiserslautern&#8217;s Sullivan, whose only loss last season came at Wiesbaden, adds the Lady Warriors to the D-II title mix.

Change also could be in the cards in D-IV. Brussels, which won three straight European crowns around the nucleus of four-year starters Elizabeth McVicker and Caitlin Quinn, graduated that duo in June. While the cupboard&#8217;s not bare in Brussels, Rota, led by returning All-Europe center Bethany Walcott (17 points, 11 rebounds per game), will make the Lady Brigands&#8217; path to a fourth straight crown a steep one.