Ramstein’s Jamie Beach, left, looks to turn a double play after fielding a grounder against Kaiserslautern during the DODDS-Europe Division I softball final in Ramstein, Germany, on Saturday. (Raymond T. Conway / S&S)

Ramstein’s Jamie Beach, left, looks to turn a double play after fielding a grounder against Kaiserslautern during the DODDS-Europe Division I softball final in Ramstein, Germany, on Saturday. (Raymond T. Conway / S&S) 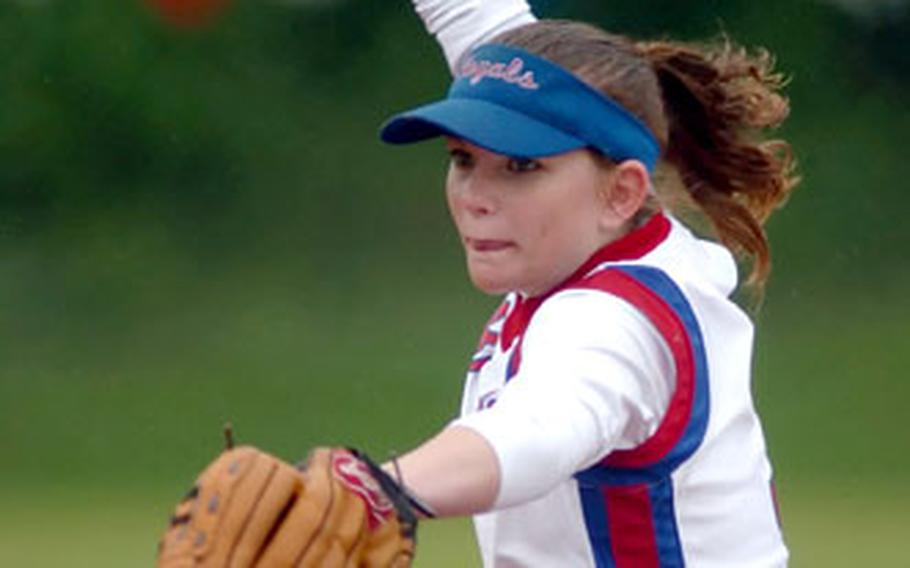 Ramstein’s Kayla Haven winds up for a pitch against Kaiserslautern during the DODDS-Europe Division I softball championship in Ramstein, Germany, on Saturday. Ramstein defeated Kaiserslautern 16-3. (Raymond T. Conway / S&S)

RAMSTEIN AIR BASE, Germany &#8212; Before Kaiserslautern had the chance to swing the bat, it already was down 13-0 to its cross-town rival.

The Ramstein Lady Royals captured their fourth straight Division I crown Saturday with a 16-3 triumph over Kaiserslautern.

Umpires called the game after five innings because the run deferential between the two teams was 10 or more, though it likely would have ended early anyway due to inclement weather.

Ramstein advanced to the final game when it edged Lakenheath in a pool-play game earlier Saturday 6-5.

Kayla Haven, who pitched both games, picked up in the final where she left off against Lakenheath. After spotting the Lady Lancers a 5-0 lead, Haven settled down, shutting out Lakenheath and allowing her team a chance to rally and win.

No such rally was needed against Kaiserslautern.

Haven helped her own cause with four hits, including a pair of triples and a double. The 16-year-old sophomore also scored three runs and drove in several more.

Also helping out in a big way was senior Lindsey Dunn, who collected three hits and scored a couple of runs.

Aside from beating a cross-town rival, the victory was gratifying for Ramstein because Kaiserslautern had defeated the Lady Royals 8-7 earlier in the year-end tournament. Ramstein did rally in that game, but fell short.

Ramstein nearly batted around the order twice in the first inning. Haven stroked a single and a triple, but virtually the entire team was in on the hit parade.

Offensively, Kaiserslautern was led by pitcher Kili Smith, who went 2-for-3, and first baseman Emily Badstibner, who had two hits and scored a run.