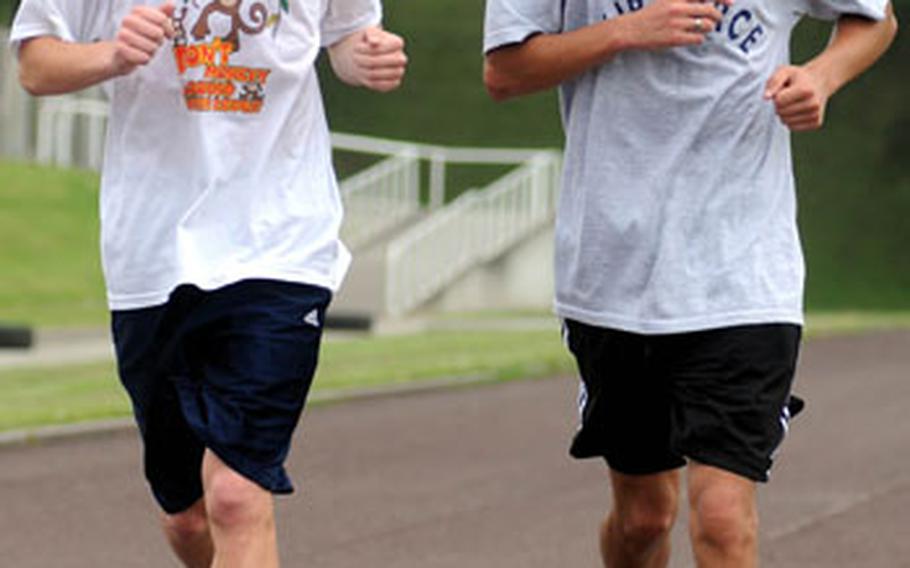 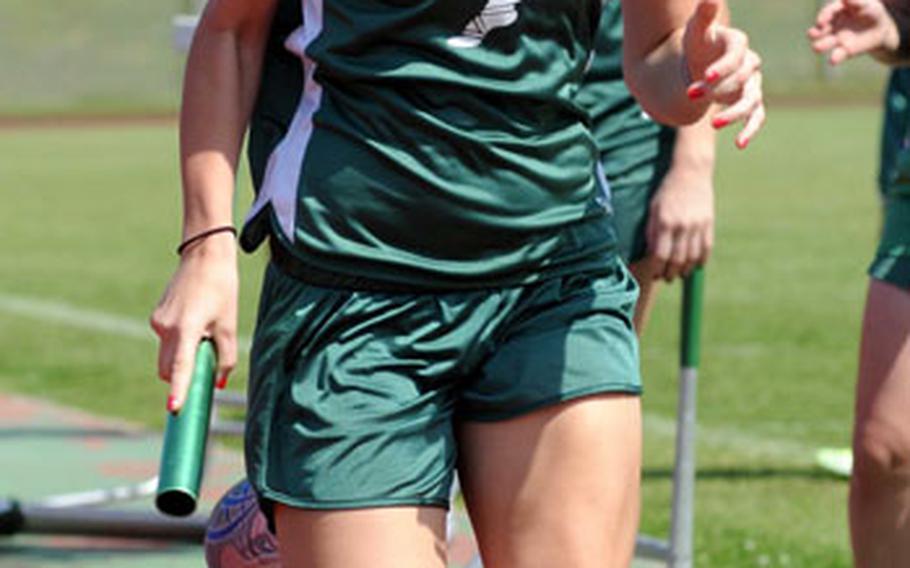 CAMP FOSTER, Okinawa &#8212; Their legs burned, their lungs drawing deep drafts of the warm afternoon air, as they crossed the finish line &#8212; Jessica Powell in 2 minutes, 46 seconds and Abigail Wall, her training partner and best friend, two seconds behind.

Minutes after Powell and Wall finished their sweep, Sanchez and Bishop finished their turn, with Sanchez crossing the line at the finish of the 800 in 2:05 and Bishop seconds behind. Sanchez also won the 1,500, while Bishop captured the 3,000.

Normally, Mendoza has had just cornerstone distance specialist to work with, Cliff Johnson and Tim Nabonne in the last decade, Bishop the last two years. But Sanchez, after winning the OAC island cross-country championship last fall, has risen to become friend and rival to Bishop.

But while pushing each other in practice, the two ensure that neither pushes too hard, too soon during meets. &#8220;He keeps me in check, basically,&#8221; Sanchez said.

On a team that has been known for its sprinters, having two such athletes could yield a bonus of points and medals up and down the lineup for Kadena, Mendoza said.

What Bishop and Sanchez, both juniors, are to Kadena&#8217;s boys, Powell and Wall are to Kubasaki&#8217;s girls &#8212; Powell a sophomore, Wall a freshman who began the year at Lester Middle School but accelerated to high school in January. Powell terms the two &#8220;rivals, but friends, definitely.&#8221;

While Bishop and Sanchez are more training partners, Powell and Wall are practically inseparable. They live next to each other at Foster&#8217;s Plaza Housing Area, and they do everything from train to hanging out to sleep overs at each other&#8217;s homes.

On the track is where the competition heats up.

While Mendoza&#8217;s Panthers have generally fielded one solid distance runner, Burns and the Dragons have over the years been blessed with sisters, Crystal and Candace Sandness in the early 2000s and Beth and Lisa Nielsen later in the decade.

While Bishop and Sanchez are due to graduate at Kadena, this will be the last year for Powell and Wall in Kubasaki uniforms. Wall is set to transfer to Yokota and Powell to Illinois over the summer.

Both athletes and coaches exude optimism over where the &#8220;Long-Distance Crew&#8221; might take them, with the Mike Petty Memorial meet first up April 9-10 at Kubasaki, the Kanto Invitational May 15 in Tokyo and the first Far East meet at Kubasaki on May 24-25.