Defending champs have holes to fill 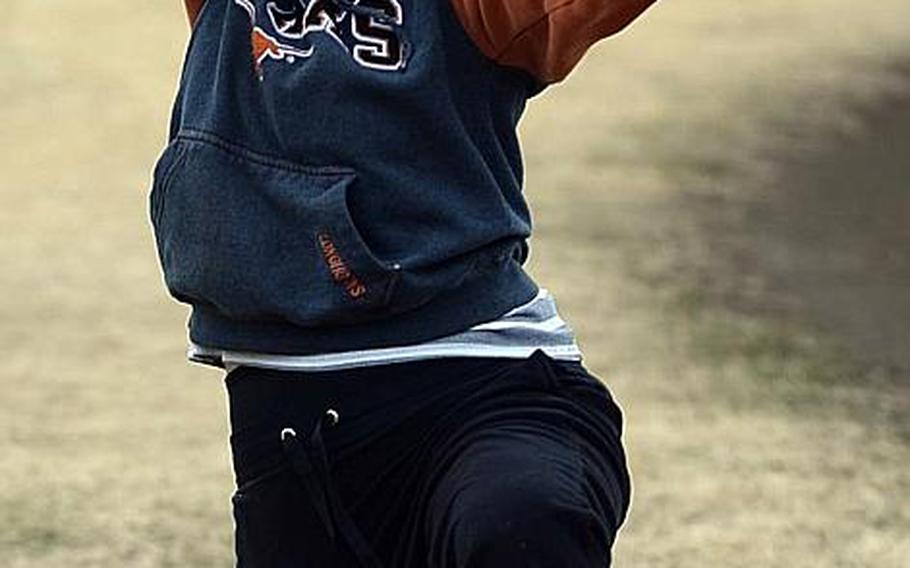 Buy Photo
Aracely Diaz takes over as coach of a Yokota softball team seeking its third straight title in the Far East Division II softball tournament. Her daughters Irene and Adrianna also figure to be lineup fixtures. They transferred at midseason last year from New Mexico. (Dave Ornauer/Stars and Stripes)

Buy Photo
Aracely Diaz takes over as coach of a Yokota softball team seeking its third straight title in the Far East Division II softball tournament. Her daughters Irene and Adrianna also figure to be lineup fixtures. They transferred at midseason last year from New Mexico. (Dave Ornauer/Stars and Stripes) 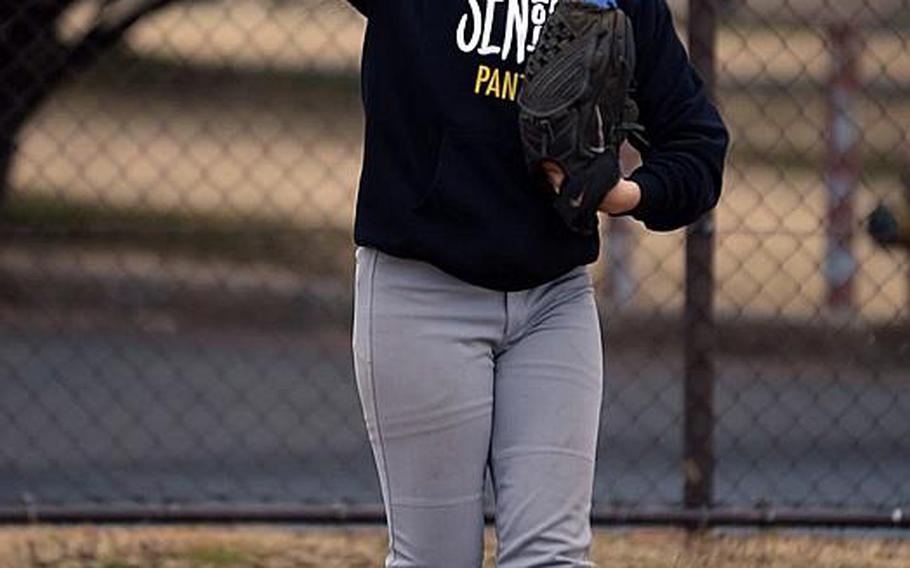 Freshman Kennedi Williams is one of a handful of headliners on a Daegu softball team in rebuild mode with new coach Joy Sims. (Angela Root/Special to Stripes) 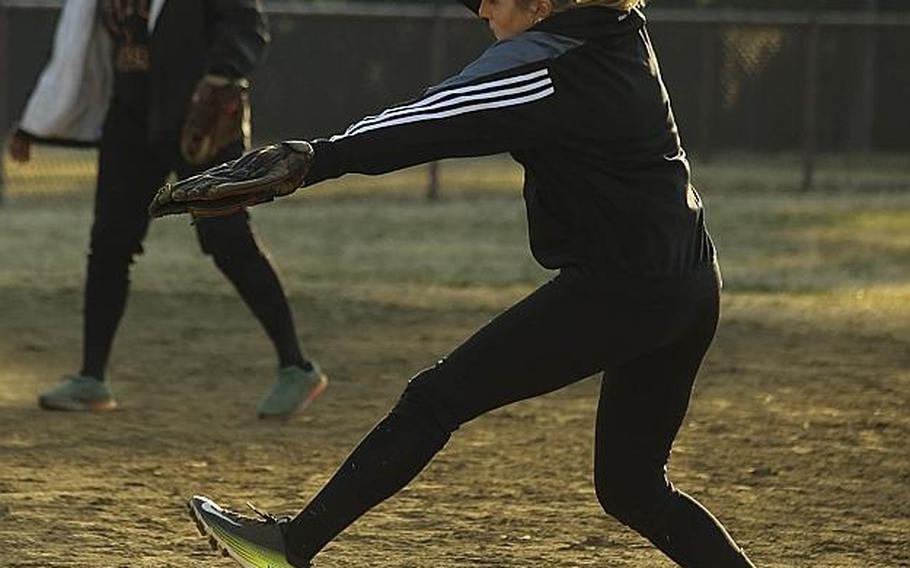 Senior Ally Chiarenza figures to be a fixture on the mound, behind the plate and in the infield for Zama softball this season. (Kayla Bodwin/Special to Stripes) 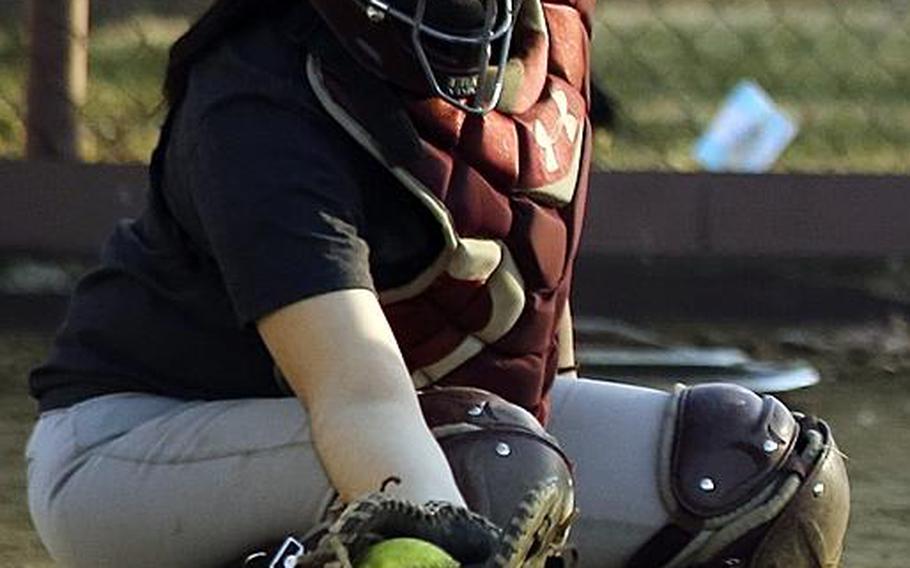 Ayumi Davis is one of two key returners for a Zama team that otherwise has new and veteran blood who figure to challenge for a long elusive Far East Division II Tournament title. Zama hosts the D-II tournament May 15-17. (Kayla Bodwin/Special to Stripes) 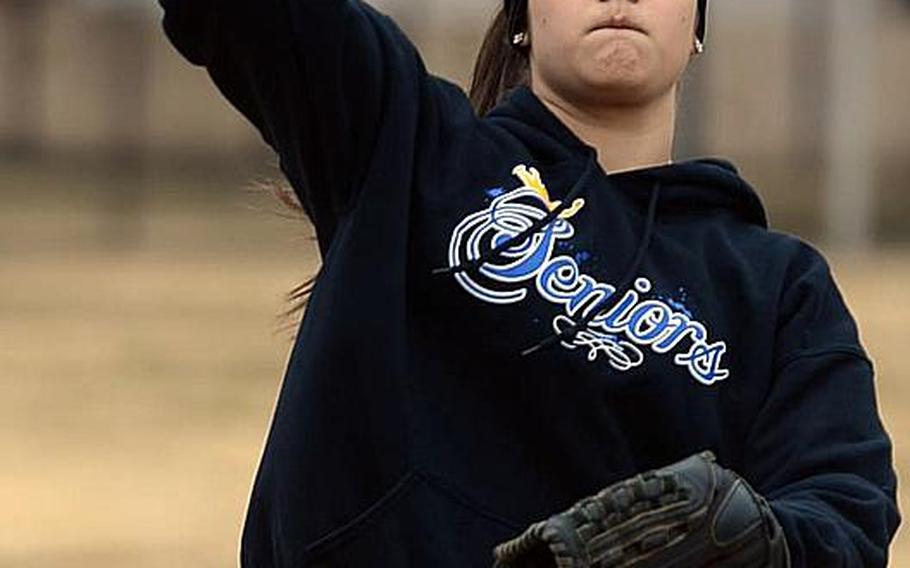 Buy Photo
Not only are Irene Diaz, who transferred at midseason a year ago from New Mexico, and her Yokota Panthers seeking their third straight Far East Division II softball tournament title -- Diaz is hoping to complete her senior year with D-II titles in volleyball, basketball and on the diamond as well. (Dave Ornauer/Stars and Stripes) 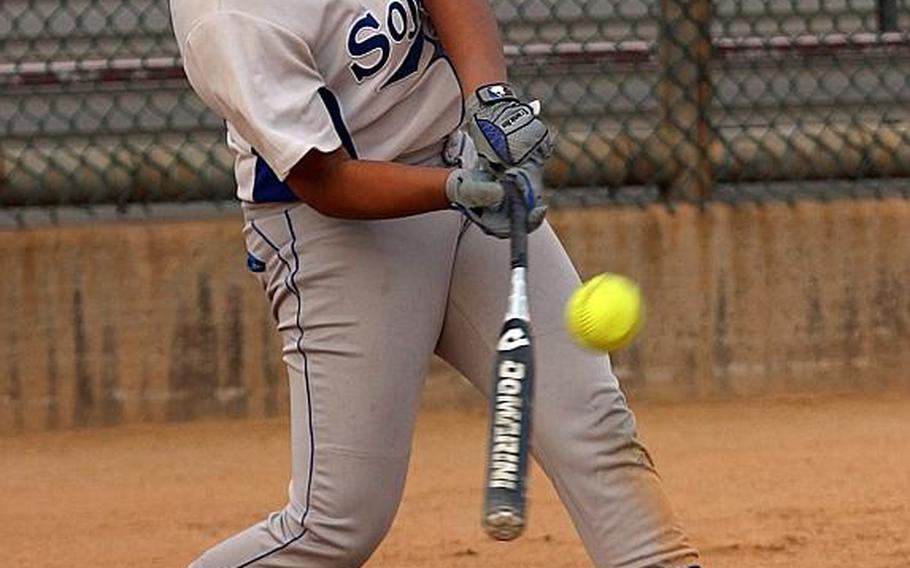 Senior Krista Bradley is one of a handful of returnees on a Seoul American softball team that's thin in numbers this season. (Caleb Rivera/Special to Stripes) 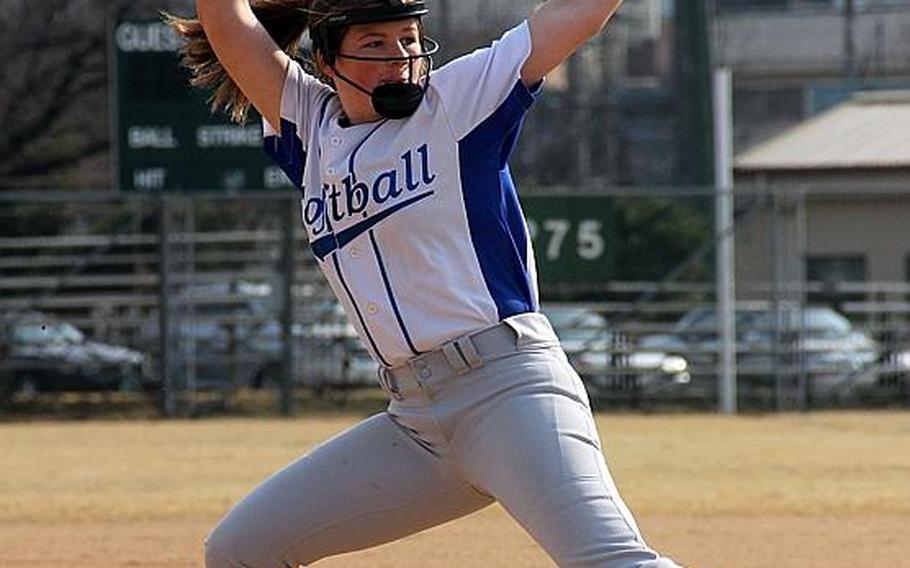 Freshman Kendall Winn transferred to Seoul American softball from Chesapeake, Va., where she played for a Virginia elite traveling team. Winn will pitch and play third base for the Falcons. (Caleb Rivera/Special to Stripes) 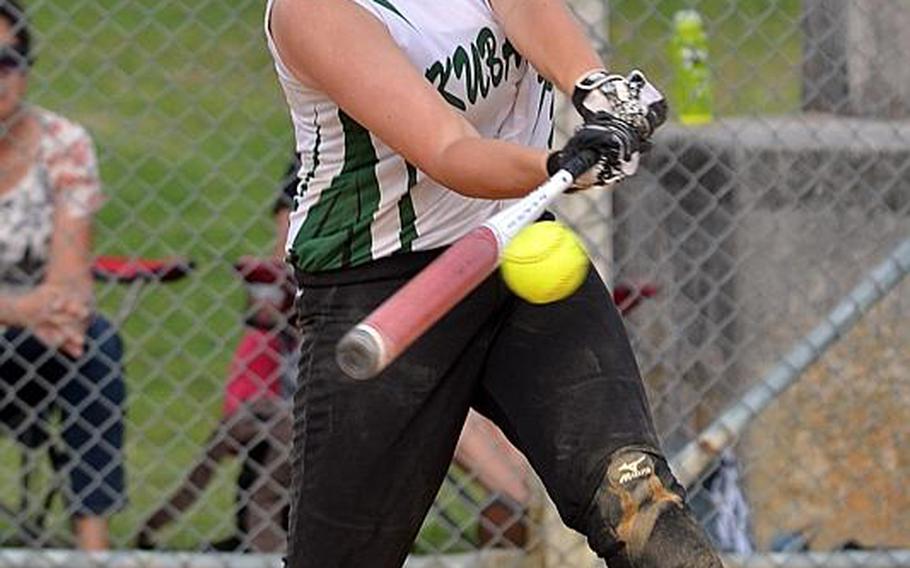 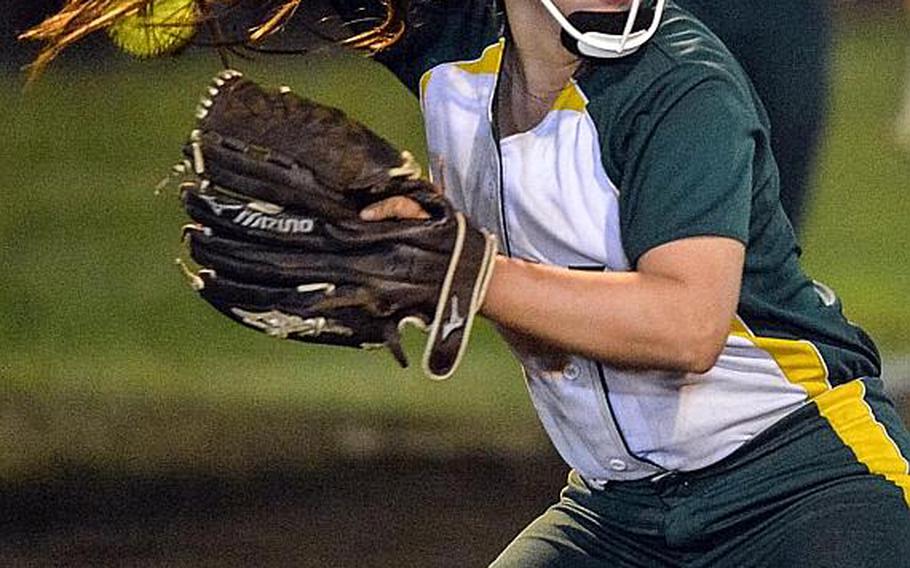 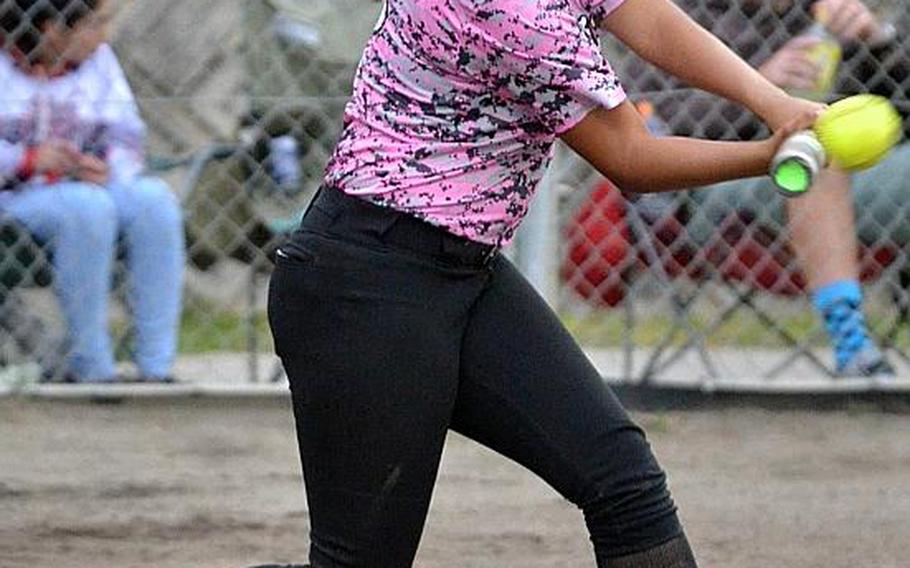 KADENA AIR BASE, Okinawa – Tom Bell turned away from the presentation on his smartboard, which portrayed several slides devoted to the Roman Empire, part of his world regions curriculum.

He’s more than aware of the recent history behind his new part-time job at Kadena: replacing softball coach, Kelli Wilson, architect of Far East Division I title teams four of her five years. And Bell takes over a program battered by transfers and graduation.

But this is a shell of the Kadena team that battered American School In Japan 14-5 in last May’s D-I final at Yokosuka. The winning pitcher in that game, Savannah Sparrow, transferred to Germany and five other starters departed as well.

A core of three starters remains; all were invaluable to Kadena’s title effort last spring. Briana Wilson, the reigning D-I MVP, returns at first base and could see time on the mound. Bryana Alexander moves from second base to catcher. And new second baseman Yasmine Doss came on strong at the plate late last year.

The biggest question mark looms on the mound. A team that relied heavily on pitching during its title salad years finds itself bereft of a single player that pitched a season ago.

That burden falls mainly on Lauren Erp, a junior who returns to softball after a season away throwing shot put and discus for the track and field team.

“I don’t think there are any shoes I can’t fill,” Erp said of replacing Sparrow and No. 2 starter Cassidy Delatte, who also transferred.

Leadership is not in question, Bell said, as Wilson and Alexander have “stepped in perfectly” to fill the role. There are freshmen coming in from the Lady Ambassadors youth program who have promise and potential, “but they need time” to develop, Bell said.

As for who may challenge Kadena’s claim to the D-I throne, the other four Far East teams have plenty of promise, but many holes to fill.

Kubasaki has four-year pitchers Reaven East and Leah Bebout, but lost the left side of the infield to transfer.

ASIJ returns Allie Rogers and Sasha Sasanuma from its D-I runner-up team. Kinnick suffered a huge blow when veteran pitcher Kayla Germany opted to not play this season. Seoul American is short on numbers as much of its population is readying to move to Humphreys this summer.

Erp and Alexander feel the chances of Kadena repeating are “50-50.”

“We’ll know when it gets closer,” Alexander said.

“I feel the banner will come back to Okinawa,” Erp said.

Yokota is seeking its third straight title since becoming a small-school program in late 2014.

Panthers senior shortstop Kaia Austin could contend for her third straight D-II MVP award. And senior Irene Diaz, who transferred from New Mexico along with her mom and new coach Aracely Diaz, is seeking her third D-II title in three different sports.

“Our defense will be able to back them up,” Irene Diaz said.

Yokota should get a stern challenge from an Edgren team that retains star starter Brittany Crown, Zama with its powerful offense led by four-year starter Ally Chiarenza, and E.J. King with its veteran-laden squad led by senior Shiona Lonesky.

“We have a chance,” Austin said. “There’s always a chance.”