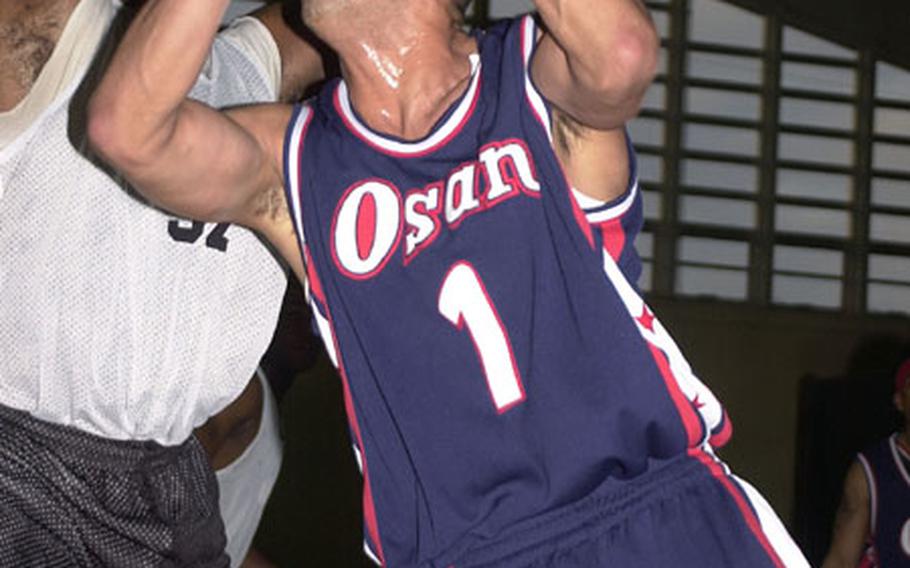 CAMP FOSTER, Okinawa &#8212; It came 362 days later than they wanted, but the Osan Defenders got the victory they sought in the Martin Luther King Invitational Basketball Tournament.

Though jubilant, Jones put Saturday&#8217;s round-robin victory in perspective. Still, he felt the victory could propel Osan to the title game, in which the Defenders might meet Dynasty again.

Last year&#8217;s loss in the finals still smolders in the mind of center Cedric Tanner, Osan&#8217;s lone returnee. The Defenders brought seven players, mostly reserves, to the 2002 tournament, and Tanner felt they could have done better against Down Town with their full squad.

With eight players this time &#8212; all starters or key contributors &#8212; Tanner feels things could finish differently.

Darryl Harmon had 14 first-half points and Carl Little contributed eight, but Dynasty trailed just 26-22 with a couple of minutes left before halftime, thanks to Wooten&#8217;s eight points and six from Baez.

Little then took charge, driving for a layup that capped an 8-0 run and put the Defenders up 34-22 1:30 into the second half. His three-pointer from the right side bumped the lead to 37-24, and Osan was never threatened.

Harmon finished with 21 points, including four threes, while Little added three from long range and 13 points. Gerald Ragland had 12, and Baez wound up with 12.