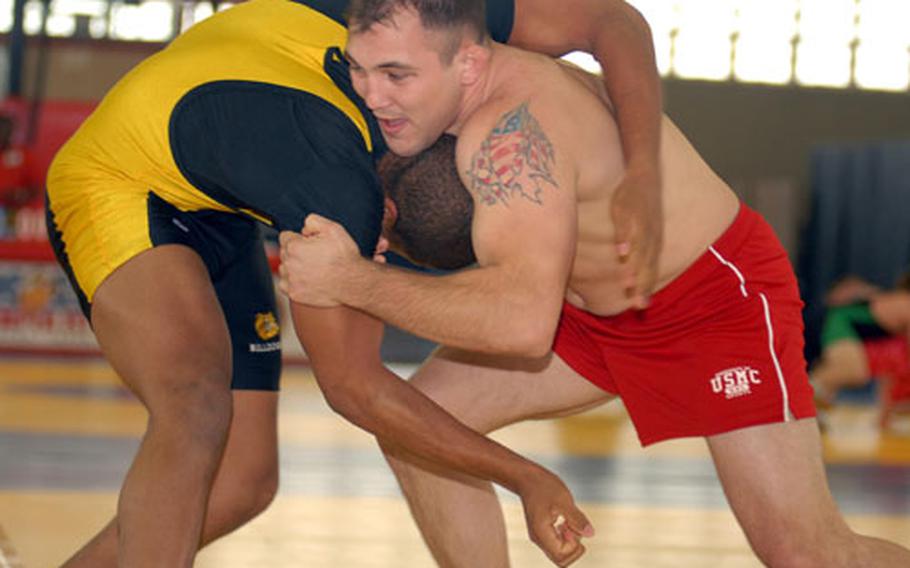 But none of those stops involved wearing a battle suit or toting a rifle. Clark&#8217;s combat usually is performed in a singlet and headgear and on a heavy rubber foam mat, on which he&#8217;s garnered 10 All-Armed Forces gold medals, six U.S. championships, a Pan American Games silver medal and a seventh-place World Championship finish.

Almost immediately after he returned to Okinawa two weeks ago, it was time to check out and head for his new duty station: Marine Corps Air Station Cherry Point, N.C. &#8212; conveniently, about 20 miles from Camp Lejueune, the All-Marine wrestling team&#8217;s new headquarters.

But, Clark said, of everything he&#8217;s done, places he&#8217;s seen and medals he&#8217;s won, nothing beats carrying the red, white and blue banner into the World Championships ring in September at Juangzhou, China.

The past two summers, he&#8217;s conducted clinics for Pacific high school wrestlers at home in Minnesota and taken them under the banner of Team Okinawa to USA Wrestling&#8217;s junior and cadet championships in Fargo, N.D. He said he plans to continue the practice this summer.

Recently Clark spent some time working with Kadena High School&#8217;s wrestlers during a practice, then with Kubasaki&#8217;s grapplers during Saturday&#8217;s Foster Open tournament.

&#8220;Any time a guy like Jake wants to come over and volunteer his time, I&#8217;ll take it,&#8221; said coach Steve Schrock of defending Far East tournament champion Kadena.

More immediately, Clark said, he wasn&#8217;t looking too far ahead about his chances of representing Team USA in the 2008 Summer Olympic Games in Beijing.