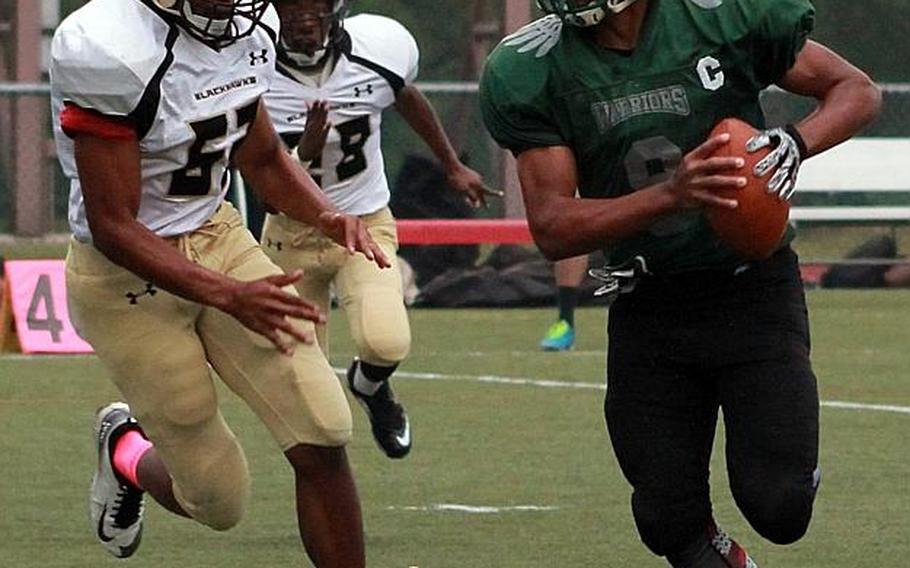 If there is such a thing as a championship game during the regular season, DeAndre Rosalie says he and his Daegu teammates are staring right into the face of one Friday.

The two-time defending Far East Division II champions hop a bus for Camp Humphreys around mid-day Friday, traveling to play the Blackhawks in what amounts to a must-win for Humphreys, but also “the biggest game of the season” for Daegu, said Rosalie, the Warriors’ senior quarterback.

“We all know the weight that this game carries,” said Rosalie, noting that the Warriors can all but clinch D-II title-game host rights with a win. It would mean a sweep of the season series against the Blackhawks, with two D-II games left against rebuilding Osan.

“We’re looking to have the first undefeated season in Daegu history, so that means playing our hearts out every game,” Rosalie said. “In terms of my personal career, it’s (Friday’s game) definitely up there when it comes to important games.”

Kickoff is at 6 p.m. at Blackhawks Field. Daegu will take on a Humphreys team that’s beset by injuries and a couple of ineligibilities that have pared the roster at the worst possible time, Blackhawks coach Aaron Mundy said.

Among other divisional games of note, Zama travels to Robert D. Edgren, with each team needing a victory to stay alive in the chase to represent Japan in the D-II title game. Kickoff is at 7 p.m. Friday.

In Division I, Nile C. Kinnick visits Kadena at 3 p.m. Saturday. The Red Devils need a win by 15 or more points to split the season series and gain a Division I standings victory by points aggregate; the Panthers beat Kinnick 35-21 three weeks earlier.

And in a game with no divisional rights at stake but the renewal of an old rivalry dating back to 1975, Kubasaki travels to Yokota, site of the Dragons’ 34-6 and 55-8 defeats in the D-I title games in 2011 and 2012. Yokota is in its first season as a Division II team. Kickoff is at 3 p.m. Saturday.

“It’s always interesting to compete, to get a chance to play an excellent team, for the experience, what we’ll get going forward from it and for bragging rights,” Yokota coach Tim Pujol said.