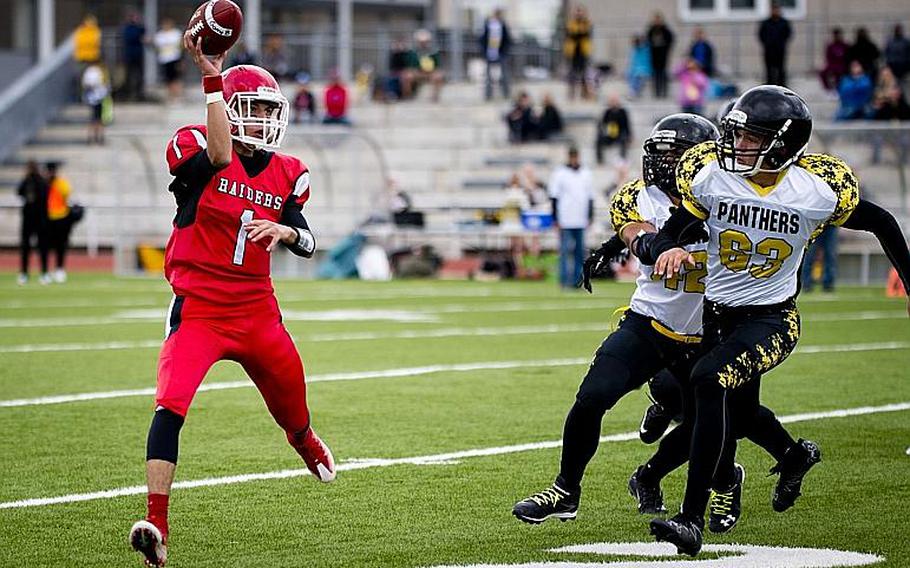 Their preseason scrimmages didn’t count towards the regular season.

Their regular-season openers didn’t count towards qualifying for the postseason.

This weekend, the games begin to count.

The three DODEA-Europe Division I football games slated for Friday and Saturday begin the round-robin system that will determine which four of the division’s six teams advance to the playoffs. Each team will play its five Division I rivals once apiece; the four teams with the best records at the end of the process advance to the semifinals the weekend of Oct. 28, with a chance to play for the championship on Nov. 4.

Defending champion Ramstein expects to be there at the end. But the Royals will face one of the toughest tests of their season on Friday as they visit the resurgent Stuttgart Panthers. After missing the playoffs a year ago, 2015 champion Stuttgart appears back among the divisional elite, particularly after a thorough 30-9 throttling of Kaiserslautern in its Sept. 9 opener.

Another likely playoff team, returning runner-up Wiesbaden, was equally impressive in blanking Vilseck 38-0 in its opener. The Warriors travel to Lakenheath to take on a solid Lancer team that competed admirably against Ramstein before taking a 36-3 opening loss last weekend.

The opening-weekend schedule, meanwhile, presents an opportunity for either Vilseck or Kaiserslautern to get a head start on an uphill climb to the postseason. Both teams struggled in their respective openers, but Vilseck’s visit to Kaiserslautern on Saturday should leave one of the two with an early winning record.