Buy Photo
Bitburg's Leila Hall, left, battles for the ball with Ramstein's Josie Seebeck in the Royals' 10-0 victory over the visiting Barons in Ramstein, Saturday. (Michael Abrams/Stars and Stripes)

Buy Photo
Bitburg's Leila Hall, left, battles for the ball with Ramstein's Josie Seebeck in the Royals' 10-0 victory over the visiting Barons in Ramstein, Saturday. (Michael Abrams/Stars and Stripes) Buy Photo
Bitburg keeper Isabella Madamba pulls in the ball before a charging Mimi Rivera of Ramstein can get to it. Ramstein beat Bitburg 10-0 at home, Saturday. (Michael Abrams/Stars and Stripes) 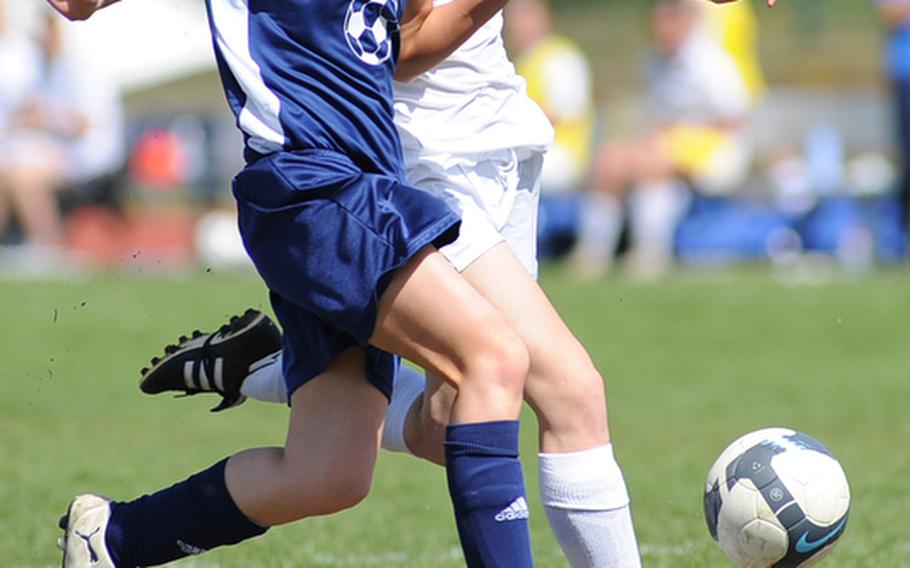 Big-margin shutouts by the power programs in girls&rsquo; soccer were the order of the day on a Saturday that saw Ramstein blank Bitburg 10-0, Patch thump Schweinfurt 9-0 and Kaiserslautern whitewash Black Forest Academy 5-0. All three of those victors remained unbeaten and on a collision course for the European Division I title to be settled May 21-24 at Ramstein.

Ramstein 10, Bitburg 0: Saturday at Ramstein, Stars and Stripes 2011 player of the year Josie Seebeck, returning to action after sitting out a game with an injured hand, scored three times, and her teammate Tori Coleman twice as the Royals posted their third shutout of the season and improved to 5-0 overall and 4-0 in league play.

Murphy has 10 goals on the season. Arianna Osmar and Emily Crawford also scored for K-town. Their scores were the seventh and fifth of the season, respectively, for the two Red Raiders.

Patch 9, Schweinfurt 0: The two-time defending European D-I champs had no trouble with newcomer Schweinfurt, going up 6-0 at halftime en route to a perfect 5-0 overall and 4-0 Region III record.

Lauren Rittenhouse scored three goals and assisted on two others for Patch.

Heidelberg 4, Vilseck 0: Saturday at Heidelberg, Madison Stephens scored twice as the Lions reminded the D-I field they&rsquo;re still to be reckoned with in this month&rsquo;s tournament.

Heidelberg, which got a goal and an assist from All-European Layne Lowe, improved to 4-1 overall and 3-1 in Region III. Heidelberg&rsquo;s lone loss is a 4-0 defeat by visiting Patch on March 31.

Hohenfels 3, Ansbach 1: Friday at Hohenfels, Lauren Fink, Alexis Perryman and Hannah Watkins scored the goals that lifted the Tigers (1-3) to their first victory of the season.

Vicenza 3, AOSR 1: Saturday at Vicenza, Tatiana Miranda scored twice, and All-European Alex Frank added a goal and an assist as the Cougars improved to 3-1-1 by downing the American Overseas School of Rome.