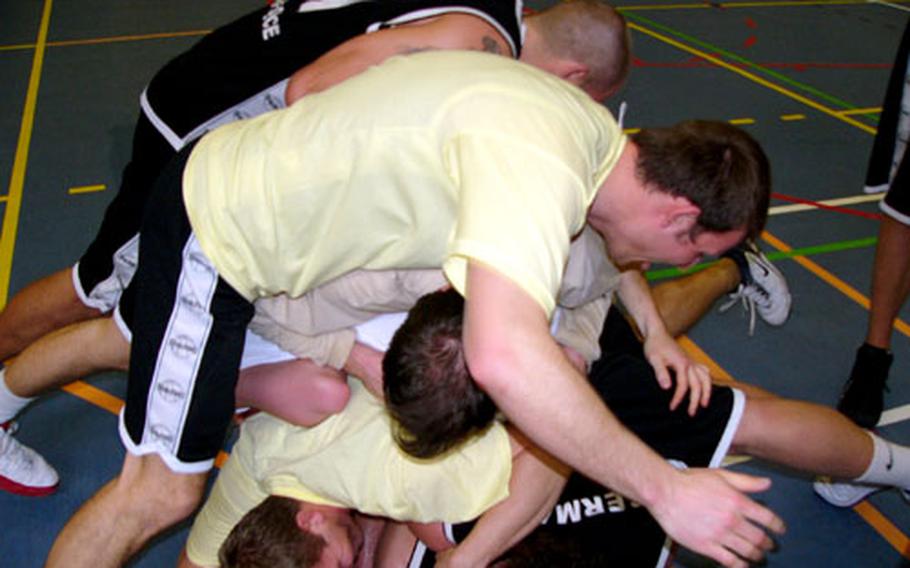 Sebastian Barth is buried by joyous teammates moments after his three-point shot with less than a second to play gave the German air force a 91-90 victory over USAFE on Wednesday. (Rusty Bryan / S&S)

Sebastian Barth took an inbounds pass on the right wing with nine-tenths of a second on the clock Wednesday and drained a three-pointer that gave the defending champions from the German air force an improbable 91-90 victory over the USAFE all-stars in the men&#8217;s championship game of the Component-Command Headquarters Ramstein Inter-Nation Basketball Tournament.

It was doubly lucky, as it turned out.

With 15 seconds left in the game and the score tied at 88, Aviano&#8217;s Chris Moed drove the length of the floor and sank what appeared to be a game-winning basket with one second left.

Germany inbounded and called time with nine-tenths of a second remaining. Inbounding at midcourt on the right side of the floor, Germany attempted to get the ball to 6-9 Paul Klar.

Lakenheath&#8217;s Anthoine Carpening reached over Klar and batted the ball to the floor and out of bounds. The Belgian scorekeepers, however, neglected to start the clock when the ball was touched, and .9 seconds still showed on the scoreboard.

Chief floor official Tomas Villegas called a conference with his two Belgian referees, and the three decided to replay the inbounds play.

This time, Barth, who had 24 points, grabbed the ball and hit the game-winner.

&#8220;The game should have been over as soon as someone touched the ball,&#8221; Villegas said afterward.

However, Villegas, an official for more than 30 years and the dean of U.S. officials in Europe, went along with the group decision.

U.S. officials protested the replay but, according to USAFE sports chief Steve Lowe, the appeal was denied.

Up until the final second, the game had been played brilliantly by both teams.

USAFE led 85-79 with 2:20 to play on the strength of five points scored off two of the just seven offensive rebounds the Americans managed against the taller and more muscular German air force team.

But the Germans&#8217; size asserted itself at the end when they refused to be boxed out on missed free throws. Klar hit two free throws and a put-back basket to cut the gap to 86-85 with 44 seconds left. Moed got it to 88-85 with a pair of foul shots before Barth hit a three to tie it and set up the finish.

However improbable the final play, Lucas said his team took the results like men.