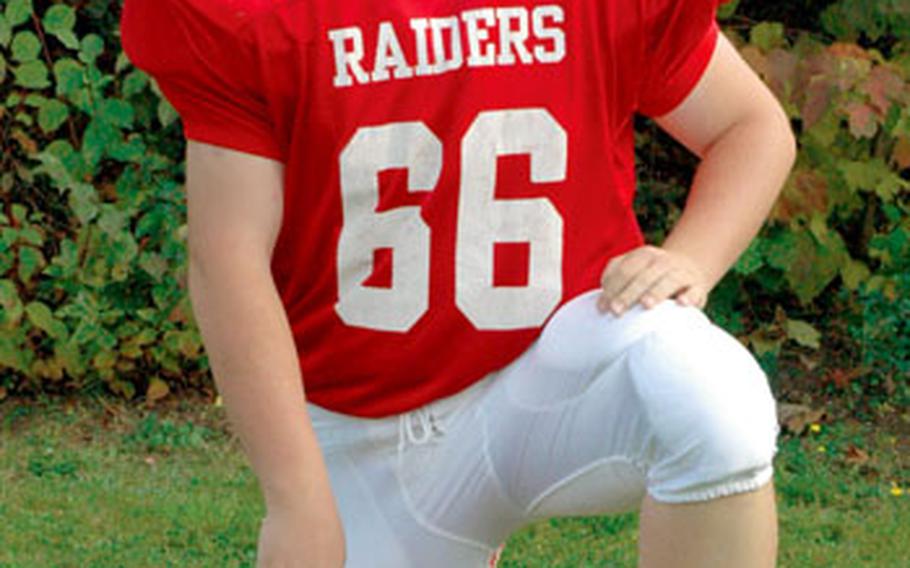 At 6-3, 320 pounds, former Kaiserslautern All-European Andrew Holgate is devoting his senior year to finding out whether he measures up to NCAA Division I-level college football by playing for Blue Ridge School in Dyke, Va. (Photo courtesy of Kaiserslautern H.S.)

Playing in college football&#8217;s top division is apparently more than a pipe dream for Holgate, who in one five-day camp in Virginia impressed his position coach and Blue Ridge coach Del Smith.

Holgate stood out so much that Smith invited him to play for Blue Ridge, a boys boarding school with a heavy emphasis on athletic success. Smith said Holgate is the first player from overseas to make his football team.

Smith was not the only one at camp impressed by Holgate. Holgate said his line coach, Lorenzo Brommell, who played on four NFL teams, told him he was &#8220;more than capable of playing D-I.&#8221;

Holgate said living at the school, similar to college players, allows for an intense practice schedule.

Holgate said everything broke quickly after the Virginia camp.

In football terms, choosing Blue Ridge was a no-brainer. For family reasons, the choice wasn&#8217;t all that easy.

Smith said Holgate has settled into his new situation.

His football, however, is coming along more slowly.

That&#8217;s fine with Holgate, who said coaches from Rutgers, among others, have talked with him.

Holgate said he misses his family and friends in K-town. And vice versa.

&#8220;Andrew started on our Academic Games team for three years and captained the team last year as a junior,&#8221; Kaiserslautern High School Academic Games coach Jerry Oyan said recently. &#8220;He would have been captain again this year. ... After knowing Andrew for eight years, I miss him. A lot.&#8221;