Casualty figures rise in Kabul, along with tensions, in suicide bombing’s wake 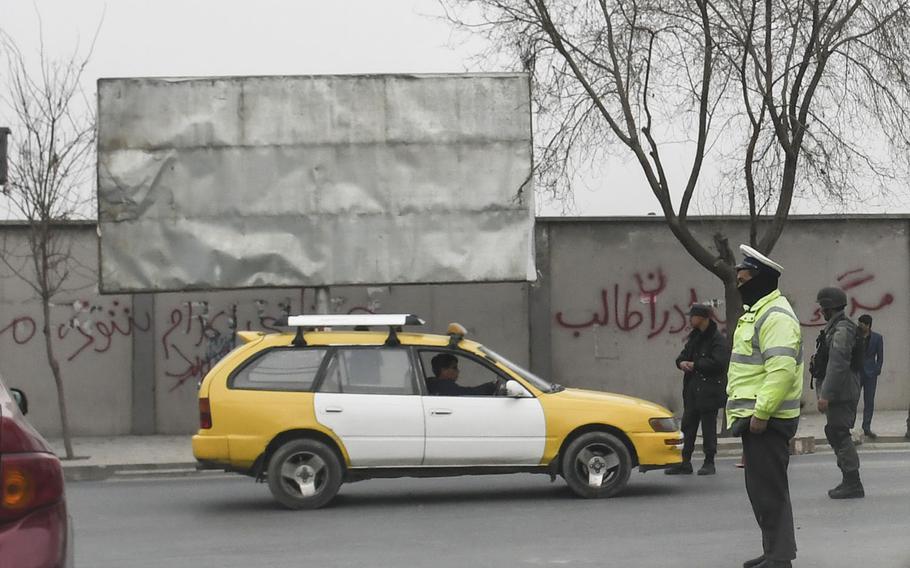 Buy Photo
Traffic police were out in force in Kabul on Sunday, Jan. 28, 2018, the day after one of the deadliest bombings in the country since 2001. The suicide bombing, which used an ambulance laden with explosives in an area teeming with people, killed more than 100 and injured more than 200 near the old Interior Ministry building. (Chad Garland/Stars and Stripes)

KABUL, Afghanistan— The casualty toll from Saturday’s lunchtime suicide bombing rose to 103 dead and 235 wounded, as Afghans attempt to recover from a Taliban attack that has terrorized an already beleaguered capital city.

The city was bustling again, with traffic police out in force on Sunday, stopping vehicles, demanding documents and threatening fines for drivers who did not comply.

The day before, the driver of a bomb-laden ambulance cleared at least one security checkpoint in a busy area near a hospital and government offices, and detonated his deadly payload when police stopped him at a second checkpoint.

The blast damaged or destroyed dozens of shops and vehicles in the area, home to a busy shopping district known to foreigners as Chicken Street, as well as several foreign embassies.

The blast was felt across the city, including at the Defense Ministry more than a mile away, where Gen. Joseph Votel, head of U.S. Central Command, was meeting with local officials on a tour of the region. The general and accompanying U.S. forces were unharmed and have since continued to other nations on their agenda.

Nusrat Rahimi, deputy spokesman for the Interior Ministry, told Stars and Stripes that the casualty toll had risen overnight. The numbers, which include many civilians, could rise further.

The Taliban claimed the attack almost immediately, even as the dead and wounded were rushed to local hospitals Saturday afternoon. The insurgent group, which seeks to overthrow the government and drive out its foreign backers, said it had targeted a building used by the Interior Ministry and the High Peace Council, a body set up in 2010 to negotiate with insurgents.

Condemnations of the attack streamed in from across the world, with Paris turning the Eiffel Tower’s lights out late Saturday in solidarity with Afghanistan.

In a White House statement, President Donald Trump said the attack “renews our resolve and that of our Afghan partners” to secure the country from militants and terrorists. He called on the world to “take decisive action” against the Taliban.

The president also tweeted: “We will not allow the Taliban to win!”

Officials have recently touted the president’s new, more aggressive strategy for the region, which calls for more troops and more leeway for commanders to strike Taliban targets. Nikki Haley, the U.S. ambassador to the United Nations, said earlier this month it had brought the Taliban closer to peace talks than ever.

Insurgents confirmed that a delegation had met with Pakistani officials and representatives from China, Qatar and other nations in Islamabad for preliminary talks about ending the 16-year war.

For Afghans in the capital, however, things seem to be getting worse. The city has become one of the deadliest in the country for civilians, though in the past it has been a refuge for Afghans fleeing conflict elsewhere.

“Right now, when you leave your house for work every morning, you wonder whether you’ll get home at night,” Ahmed Rashid said. His uncle, a driver, had suffered a number of shrapnel wounds in Saturday’s attack.

The bombing is among the deadliest of the 16-year war. It comes a little more than six months after the deadliest, a May bombing near the German Embassy that claimed 150 lives and put the city on heightened security alert, with security gates added throughout the city and K-9 units deployed at various checkpoints.

Since the U.S. and NATO withdrew most combat forces at the end of 2014, switching to a noncombat training and advising mission, Afghan security forces — plagued by corruption and poor leadership — have struggled to combat a resurgent Taliban. An Islamic State offshoot has also taken root in the country.

Last Sunday, security forces ended a more than 13-hour standoff with a half-dozen Taliban fighters who rampaged through the popular Intercontinental Hotel in Kabul, killing 22 people. Days later, ISIS militants stormed the international humanitarian organization Save the Children in the eastern city of Jalalabad, killing at least five civilians and wounding more than a dozen.

Many Afghans in the capital were angry following the week of bloody violence, with some taking to social media to call on the government to hold intelligence and defense officials to greater account.

Others in the city expressed feelings that their government had betrayed or ignored them.

“I think the government has some holes in it,” said Jahanzeb, 34, a metalworker who waited Saturday outside the Emergency hospital in Kabul. His nephew, a student, had been injured while visiting a police recruiting office near the blast site. “They are ignorant about our security.”

Officials expected possible demonstrations Sunday, and at least some workers in the area of the attack were told to stay home.

Outside the Wazir Mohammad Akbar Khan National Hospital on Sunday, Mohammad Azam, 51, condemned the attack and said Afghans can’t shift the blame for the violence.

“If we blame the government, it’s us — we blame ourselves,” Azam said. “We are part of the country. The enemies are among us.”

His son, a police officer visiting from Badakhshan province, suffered shrapnel wounds across much of the right side of his body in the blast.

The government declared it a day of mourning and Afghan flags were at half-staff throughout the country and at its foreign missions. Monday was also declared a holiday in Kabul and Tuesday a national day of prayer.

“People are sitting on the mourning carpets who had their loved ones killed or wounded — they are mourning physically and in reality,” said Rashid, the mechanic. “Such declarations cannot bring our people back. They must to take care of the future, so there is peace in the country.”