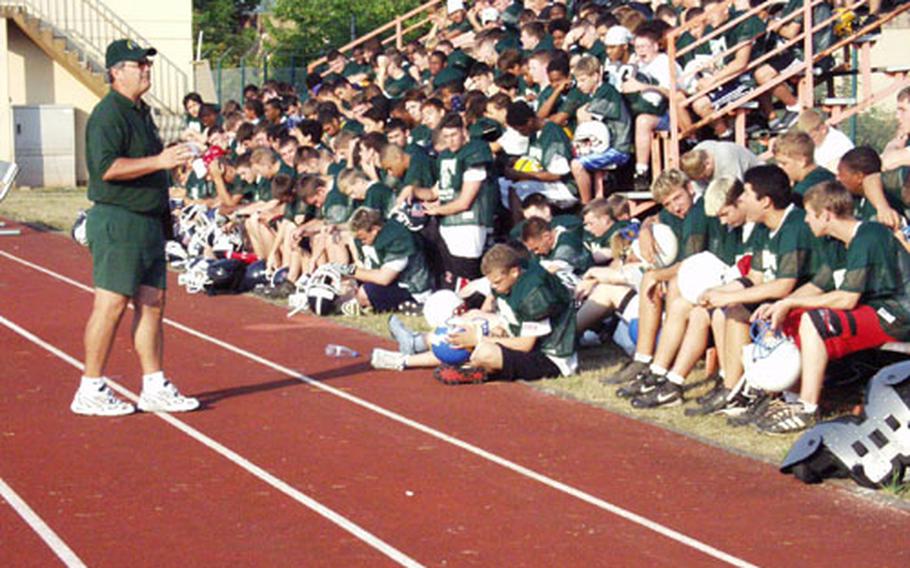 When Rik Carr moves to Reno, Nev., next month, Bitburg High School&#8217;s football coach for the past 26 years will be leaving behind a lot more than 88 gridiron victories, six conference championships, three European titles and a football field that will bear his name &#8220;until the Germans come in and paint over it.&#8221;

As a witness to the drawdown of the 1990s that turned Bitburg from a main operating base into a bedroom community for Spangdahlem Air Base, and converted its flight line into a German sports and recreation center, Carr, 56, knows all about the transitory nature of physical legacies.

However, his main bequest &#8212; the gifts of innovation, dedication, leadership, sportsmanship and inspiration that many of his former players and colleagues are already following &#8212; should last a lot longer.

It would have been hard for the players to react any other way, considering the time and attention Carr lavished on them.

&#8220;A lot of his special talent dealt with seeing the personnel and deciding how to run an offense and defense based on their capabilities,&#8221; Hollenbeck said. &#8220;A lot of coaches arbitrarily decide on a system and try to run it no matter what.&#8221;

Hollenbeck recalls talking with Carr immediately after taking the reins at Baumholder.

Few adapted better than Carr, who successfully went to a risky shotgun offense a few seasons back when his team had no choice but to field a fiercely game but grossly undersized 140-pound center.

&#8220;If I had put the quarterback up under center, our center would have gotten killed,&#8221; Carr explained at the time.

Not content with just building a program at Bitburg, Carr set out to improve all the football programs in Department of Defense Dependents Schools-Europe. His emphasis on teaching took wings in the 1990s with the revival of the preseason DODDS-Europe football camp, a way for every football player in the system to have a chance to improve.

&#8220;It was the best thing for DODDS,&#8221; Carr said of taking on the labor-intensive camp, which attracted wholehearted and mostly voluntary support from DODDS coaches, and a Bitburg community and command that filled Carr&#8217;s many requests for help. With Carr&#8217;s departure, the camp moves to W&#252;rzburg this August.

Carr, who began his coaching career at an inner-city high school in Detroit in 1970, said the drawdown and its impact on the athletic program was the biggest change during his tenure.

He said when he started coaching &#8220;it took seven to nine quality athletes to win a championship. With the population decrease, it&#8217;s down to four or five.&#8221;

The best part of it?

No coach has been a better friend than Bitburg colleague Denny Lemmon, whose most recent major achievement has been guiding the Lady Barons to four straight European basketball championships. Contributing to that streak was a legion of well-schooled JV players coached by Carr to a 50-2 record in the past six seasons.