Brown stays in stride after transfer from Naples to Hanau 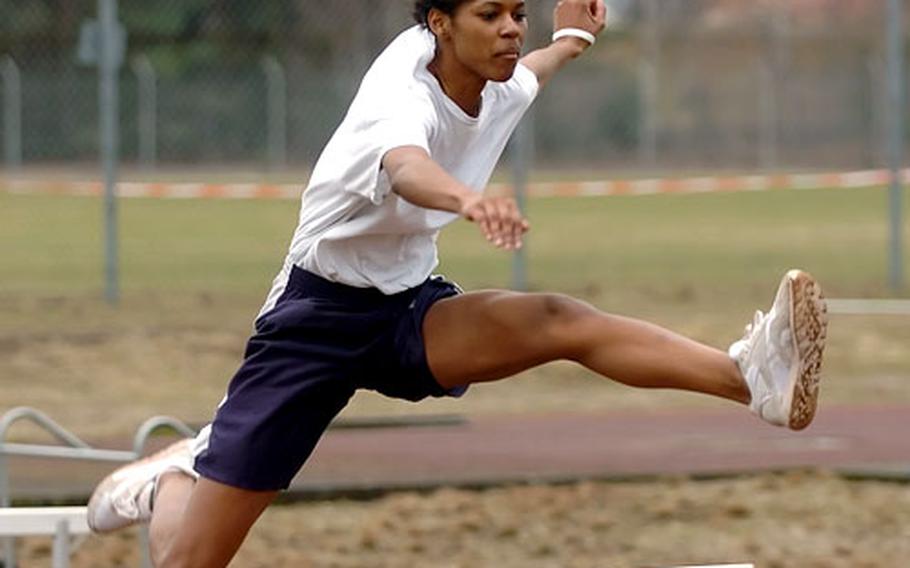 Michelle Brown is the two-time defending European champion in the 100-meter intermediate hurdles, the reigning European long-jump champion, and a former triple jump champ — all titles earned while at Naples High School. Now she has taken her skills to Hanau, where she is off and running on another strong season. (Raymond T. Conway / S&S)

To two-time defending European champion Michelle Brown of Hanau, a hurdle&#8217;s a hurdle, no matter where it is.

She transferred to Hanau last fall, but in some ways is still treading familiar ground.

But &#8220;everyone&#8221; has changed. After two years of competing every week against Italy-based schools, Brown, a senior, found herself in a new mix in last Saturday&#8217;s season-opening track and field meet at Wiesbaden.

Brown was able to take comfort in her usual results, no matter the opposition.

The reigning European long-jump champion, Brown won that event Saturday, and triumphed in her strongest event, the hurdles. She also placed third in the triple jump, in which she struck European gold in &#8217;04.

What will it take to make up that eight-tenths of a second?

Brown is the kind of transfer student coaches send limousines to collect &#8212; an all-Italy center who made the all-Europe second team for the European Division II basketball champion Hanau Lady Panthers this year, and a runner-jumper who scored 24 of the 88 points accumulated by DODDS girls champion Naples&#8217; last spring.

Jones will need them to extend to the track the run of success Hanau has enjoyed so far this school year: European championships in football and in boys and girls basketball.

Brown, 18, plans to continue her athletic and academic career next year at her hometown school, Columbus (Ga.) State University. In the meantime, there are records to chase and titles to defend, and motivation to be drawn from defending-champion status.