Brown did all asked of him - and more - for Warriors 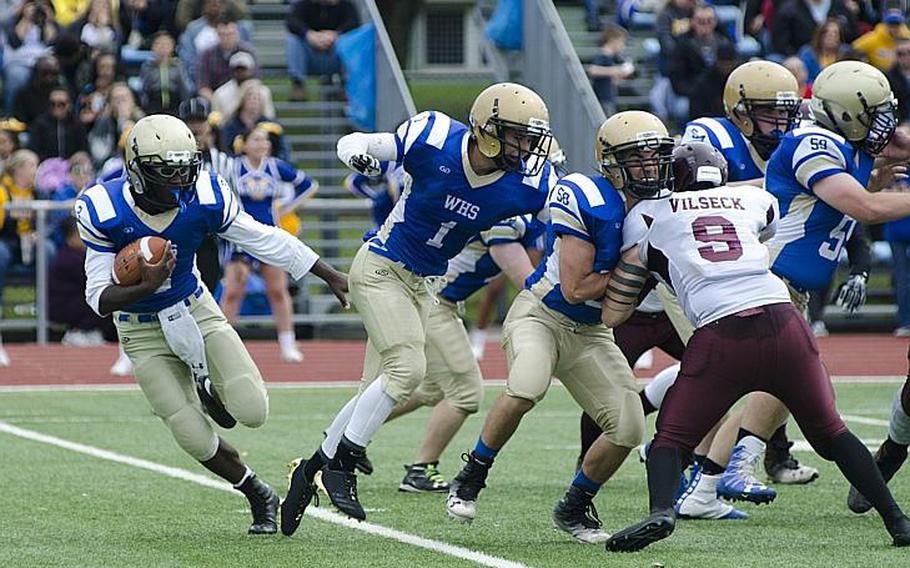 Wiesbaden senior running back Caleb Brown looks for room during the Warriors' matchup with Vilseck, Sept. 9, 2017 in Wiesbaden, Germany. (Dan Stoutamire/Stars and Stripes)

The Wiesbaden Warriors asked Caleb Brown to do a little bit of everything on the football field this year.

That didn’t bother Brown at all. His response to the overwhelming workload was to try to add to it.

“I just take it upon myself to do more than what’s expected of me,” Brown said.

Brown, the 2017 Stars and Stripes football Athlete of the Year, did just that in a magnificent senior season. For everything the team asked of him, Brown did more.

The Warriors asked Brown to play a central role in their offense. He responded by playing running back and quarterback, rushing for over 900 yards and eight touchdowns and throwing for 250 yards and four more touchdowns.

The Warriors asked Brown to shut down opposing wide receivers. He responded by becoming what Wiesbaden coach Steve Jewell called a “lockdown corner” blanketing the best wideouts DODEA-Europe had to offer.

The Warriors asked Brown to be a difference-maker on special teams. He responded by averaging more than 25 yards per kick return.

Finally, the Warriors asked Brown to exhibit senior leadership. He responded by excelling academically and taking the field with a contagious zeal for the game, finding joy in the competition from opponents, the camaraderie of teammates, the support of friends, family and fans and the incomparable atmosphere of high school football games.

“Just being out there with my teammates. The sound of everything, all the fans cheering, walking up and down the sideline giving everybody dap, having everybody smiling,” Brown said. “I just love football.”

That may be the secret to how Brown succeeded under such a heavy workload. For Brown, representing his beloved Wiesbaden High School on the football field didn’t really feel like work.

“I thoroughly enjoyed it. My teammates, we had a really fun season,” Brown said. “No matter how much work we put in we were always having fun doing it.

“It was really just an awesome, awesome experience to be able to be here.”

The Warriors felt the same about their one-of-a-kind senior star.

“He is the finest student-athlete I have had the privilege to coach,” Jewell said.