John McLouth from Ramstein High School breaks away from Mannheim&#39;s Wayne Hagan during Saturday&#39;s wet match up at Mannheim. McLouth scored two goals and had an assist during Ramstein&#39;s 5-0 victory over Mannheim. (Ben Bloker/S&S)

John McLouth from Ramstein High School breaks away from Mannheim&#39;s Wayne Hagan during Saturday&#39;s wet match up at Mannheim. McLouth scored two goals and had an assist during Ramstein&#39;s 5-0 victory over Mannheim. (Ben Bloker/S&S) 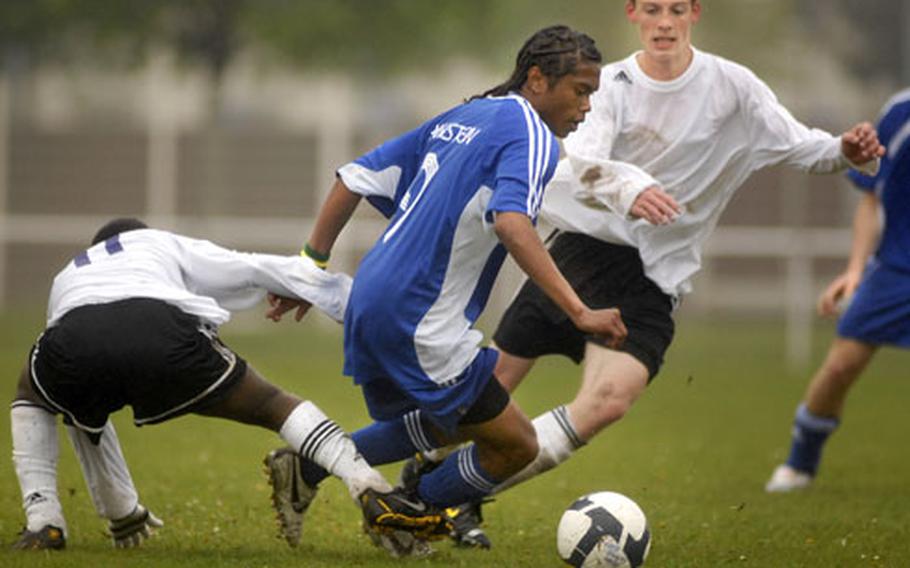 It took All-Europe striker Alassane Doukoure and his Baumholder teammates three-fourths of a rainy, muddy Saturday afternoon to figure out a way to get the ball past Kaiserslautern goalkeeper James Green.

When they did, the floodgates opened and Baumholder remained unbeaten with a 4-2 victory over the Red Raiders.

Green was credited with 26 saves in the game, which turned on two goals off the foot of Cote d&#8217;Ivoire native Doukoure, a converted penalty kick by Edgar Acosta and another tally by Alexander Shadrin.

Baumholder, which will play in the European Division III tournament next month, improved to 3-0 overall and in Region II play. Two victories came at the expense of Division II schools, the third over D-I K-town (1-3, 0-2).

Kaiserslautern got its goals from Johnny Fryer and Russell Krueuger.

Lakenheath 1, Bitburg 0: On Saturday at RAF Lakenheath, England, Trevor Snapp chipped a shot over Bitburg keeper Robby Hernandez&#8217;s head into the net 1:20 into the game, and Lakenheath keeper Sean Gresham made it stand up the rest of the way.

Gresham, who made just three saves all day, stood out for quality more than quantity.

"He made some remarkable saves," Lakenheath coach Garrett Billington said by telephone. "They took some really great shots. They just couldn&#8217;t finish."

Lakenheath, which has not allowed a goal this season, is 2-0-1 overall. Bitburg is 1-2.

Vicenza 3, Naples 0: On Friday at Vicenza, Italy, Segun Awe, Chris Stucky and All-Europe Felipe Diaz scored as the Wildcats of Division III remained unbeaten. After a scoreless tie on Saturday against D-IV Sigonella, the Cougars are 2-0-2 in American Schools in Italy league play.

Heidelberg 4, Hohenfels 0: On Saturday at Hohenfels, the Heidelberg defense was so dominant that All-Europe goalkeeper Zach Harrington was not required to make a save.

Wiesbaden 6, Ansbach 1: On Saturday at Ansbach, the Warriors of Division II rode two goals each by Logan Shelton and Matt Wickham to their first victory of the season. Ansbach fell to 0-4.

Vilseck 4, Bamberg 3: On Saturday at Bamberg, Erik Bidinger scored two goals to help Vilseck prevail in a game that was tied 2-2 at halftime.