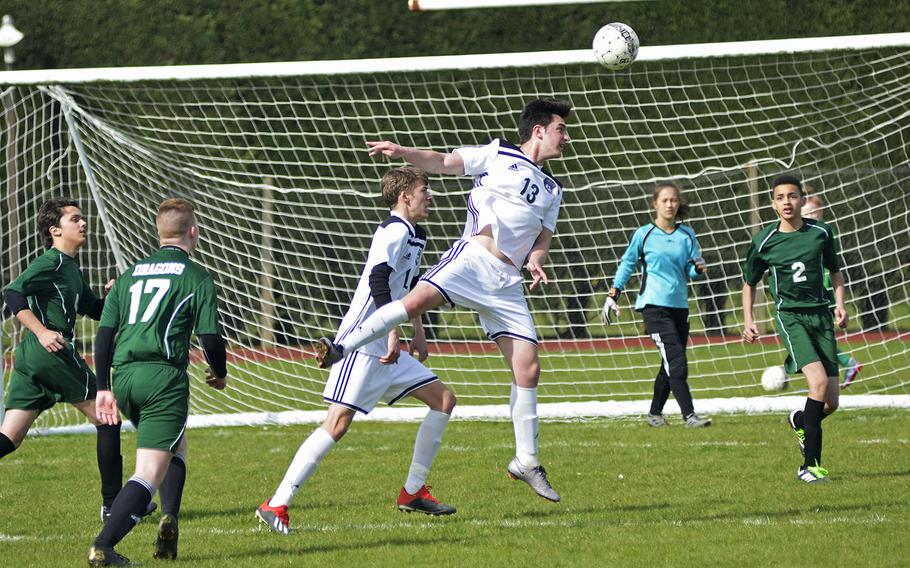 An exceedingly unpredictable set of three DODEA-Europe boys soccer championship tournaments runs Monday through Thursday in the Kaiserslautern Military Community, made all the more uncertain by weakened defending champions, fresh top seeds and a very notable absence from the field.

Division I The division’s two-time defending champion is seeded sixth out of nine teams this year, while the returning runner-up is seeded fifth. This bracket’s top seed didn’t reach the elimination round last year.

Those facts highlight the opportunity available to a breakout team in this unknowable large-school tournament.

The Naples Wildcats hope to seize that opportunity and claim the title they’ve been pursuing since their promotion to Division I five years ago. They laid the groundwork in the regular season, producing DODEA-Europe’s only undefeated overall record while notching three quality Division I wins. A 4-1 win over Wiesbaden on April 26 knocked the Warriors from the ranks of the unbeaten and sent a clear message that Naples, now armed with the tournament’s top seed, will be a formidable presence in the postseason.

The Wildcats will navigate a four-team pool that also includes fourth-seeded SHAPE, which was off to a blistering start until it took its only loss in early May; fifth-seeded Stuttgart, a solid squad hoping to repeat its breakout run to the 2018 title match; and eighth-seeded Vilseck, which showed enough regular-season grit to spring a potential upset.

Wiesbaden tops the other pool despite its setback against Naples, having beaten all other Division I opponents in a 7-1 campaign. The Warriors have a tougher road to the final in a five-team pool also featuring No. 3 Ramstein and No. 6 Kaiserslautern, though Wiesbaden posted close victories over both the Royals and reigning champion Raiders in the regular season. No. 7 Lakenheath and No. 9 Vicenza round out the bracket.

Marymount’s absence, along with the realignment of longstanding Division II presence Spangdahlem to Division III, eases the path to the finals of MMI’s crosstown rival, American Overseas School of Rome.

With just seven teams in the bracket, the top-seeded Falcons now headline a manageable pool of just two opponents, namely fourth-seeded Aviano and fifth-seeded Bahrain. That’s not to say that AOSR is in need of the assist, as the Falcons blanked Aviano 4-0 and routed Marymount 5-1 in the regular season.

Defending champion AFNORTH, which avenged its shutout loss to Marymount in the 2016 European final with a thrilling 2-1 defeat of the Royals for last spring’s title, fell to the third seed after dropping a 4-1 decision to Black Forest Academy on May 4. The Falcons claimed the higher second seed despite falling to AFNORTH 3-1 in the teams’ first meeting April 6. Those two neutral-site games represent the whole of both teams’ Division II schedules.

Sixth seed Rota and No. 7 Florence will look to deny BFA and/or AFNORTH their projected semifinal berths.

Division III Even with all the intrigue going on in the upper divisions, there’s nothing more chaotic than a seven-team, round-robin small-school bracket.

The newly-arrived Spangdahlem Sentinels and the returning runner-up Ansbach Cougars survived their regular-season divisional schedules without a loss. The Sentinels’ run featured an emphatic 6-0 defeat of the reigning champion Brussels Brigands, while Ansbach won all four of its divisional games by at least six goals in defeats of Alconbury, Baumholder and Hohenfels.

Sigonella will enter the tournament a mystery with no divisional regular-season record.