Both Baileys pivotal to Yokota's 3-peat 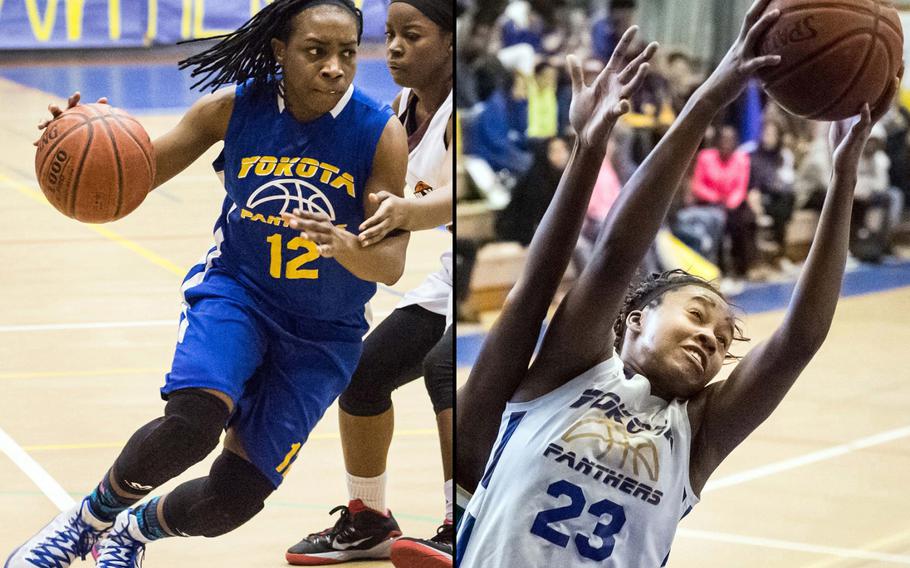 James Bailey, his daughter Jamia and their Yokota girls basketball team needed a dominating presence in the paint. Britney Bailey (not related) just wanted a chance to play in a Far East basketball tournament.

There were some bumps along the way — the two juniors didn’t always get along — but in the end, it proved to be an ideal pairing, as the Panthers ignored some early defeats and won their third straight DODEA Japan and Far East Division II titles:

Britney Bailey played strong in the middle, earning her the nickname “The Enforcer” by the coach. She averaged 20.4 points, 13.8 rebounds and 6.1 blocks per game in the regular season, 14.8 points and 10.5 rebounds at Far East, where she was named Most Valuable Player. Jamia Bailey thrived in her role as perimeter shooter and team playmaker. She averaged 12.2 points, 4.8 assists and 5.6 steals in the regular season, 12.6, 6.2 and 6.2 during Far East, was named DODEA Japan tournament MVP and brought a measure of leadership to the team, as she has the last three years. There was plenty of spirited debate as to which one was more valuable to the team. “But can we win without one or the other in the lineup? Probably not,” James Bailey said following the Panthers’ 42-35 Far East D-II final victory over Edgren.

For the roles they played, for the measure of strength and presence they brought to the Panthers, Bailey and Bailey share the honor of Stars and Stripes Pacific girls basketball Player of the Year.

The Panthers’ three-peats both in DODEA Japan and Far East might not have happened, coach and players said, were it not for a conversation following Yokota’s 55-43 loss Jan. 6 at Edgren.

After that game, the Baileys sat down with fellow starters Irene Diaz and Sally Lambie to clear the air, as it was apparent there was friction within the ranks.

“The four of us needed to sit down and figure out, did we want to win the banner again for the third year or not? After that, we had this idea, this was only one game, one of the beginning, and we needed to keep the same intensity up that we had at the start of the season.”

The next day, Yokota pounded Edgren 64-42 to split the weekend series.

While Jamia was not new to Yokota, Britney was, having transferred to Japan in a roundabout way, from Guam via Vicenza, Italy, where she resided for a month before her mother, Helen, was hired as DODEA Japan’s district community superintendent.

Britney was joyous at the chance to play in a Far East tournament in any sport; Guam teams stopped coming to Far Easts in the fall of 2014, right when Britney was a freshman at Guam High. “Very disappointed,” Britney recalled.