Blose cooks up shot at pros 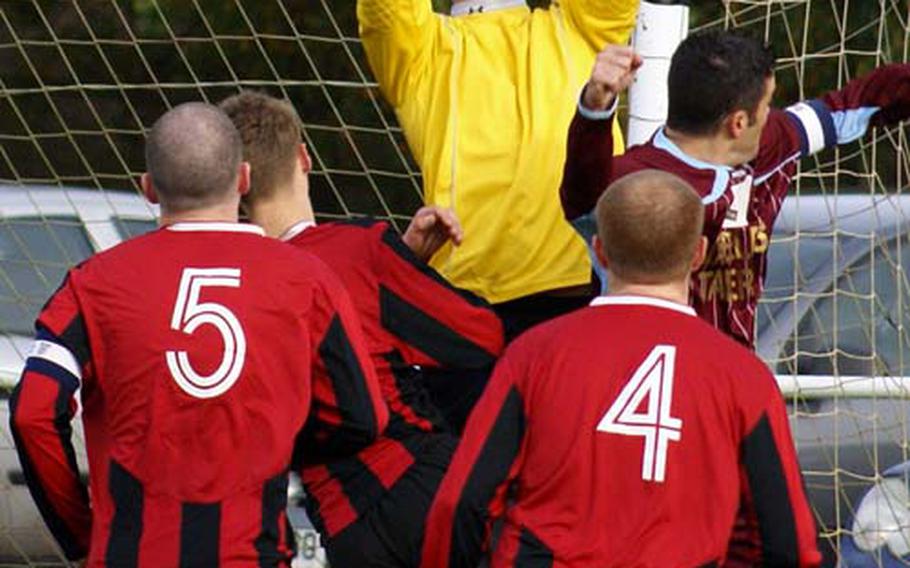 David Blose, a 2009 graduate of Alconbury High School who now helps coach the school’s soccer goalies, is shown making a save against a club team in England. The former All-Europe goalie at Alconbury received a day-long personal evaluation by the English Premier League’s Manchester United. (Courtesy of David Blose)

Two-time All-European goalkeeper David Blose discovered last week that the quickest way into the eyes of professional soccer just might be through the stomach of Manchester United manager Sir Alex Ferguson.

"My mother is French," Blose, a 2009 Alconbury grad, said by telephone last Thursday. "My uncle owns a restaurant (La M&#232;re Germaine in the French Riviera town of Villafranche-sur-Mer), and Sir Alex eats there occasionally."

Ferguson and the uncle got to talking, and the uncle mentioned that his nephew was a good soccer player. Blose took it from there.

The evaluation took place last Monday, and it wasn&#8217;t your usual sort of casting call. It was as gourmet, in its own way, as the cuisine at La M&#232;re Germaine.

"I was the only one there," Blose said. "I met Alex Ferguson and got a full tour of their facilities. They even gave me a complete Man U kit (uniform)."

"They consisted mostly of shot-stopping drills. I have bruises on my arms and forearms just from catching the ball," Blose said about his workouts shortly after emerging from a pain-relieving hot bath a few days later.

He said that at first performing against such high-level competition left some bruises on his psyche, too.

"It was nerve-wracking at first," he said, "but after a while I got the hang of it."

And while Blose didn&#8217;t exactly earn the soccer equivalent of a Michelin star during his sessions, he was encouraged by what he was told by officials with Manchester United, currently one point behind league-leading Chelsea in the English Premier League standings.

"The said that &#8216;technical-wise&#8217; I was at that level," Blose said. "They said I needed to work on my nutrition and fitness, and gave me some dietary plans plus some drills to improve my foot speed."

Blose, who closed his high school career last May by shutting out Sigonella 1-0 in the European Division IV title game, currently plays for college and club teams. He still helps his DODDS-Europe alma mater, too.

"He comes out when he can," Alconbury coach Jeffrey Black said by telephone Tuesday. "He takes our boys and girls goalkeepers aside and teaches them drills."

Black said Blose&#8217;s pursuit of a professional career is no pipe dream.

Blose said he hopes to continue his career by playing semi-pro ball in England next season.

Last week&#8217;s experience at Manchester will do nothing but help Blose&#8217;s advancement, according to Black.

Game of the WeekBaseballWhat: Aviano at Vicenza doubleheaderWhen: 10 a.m. SaturdayWhere: Downtown stadium, VicenzaWhat&#8217;s at stake: Southern Region leadWith All-European Jack Buffington on the hill for at least one of the games, the Cougars (6-2) would seem poised to least maintain their one-game lead over their neighborhood rivals when they face off Saturday. After all, Buffington struck out 26 batters in 11 innings while recording three of Vicenza&#8217;s four victories last weekend at Naples,

But this is baseball, where anything can happen.

"We&#8217;re going to have to get keyed up to overcome the Vicenza Cougars&#8217; pitching ace," Aviano coach Harold Ackett said Tuesday in an e-mail, "but we&#8217;ve been considered the underdog all year and we keep scrapping and playing relentless baseball."

Vicenza coach Mark Wilson had no argument about the relentlessness of this week&#8217;s opponent. He said in a Tuesday e-mail that "&#8230;they put a lot of runs on the board, and our pitching and defense definitely will be challenged&#8230;," but he was also quick to point out his team is much more than a one-man staff.

"We had three come-from-behind, last-inning victories (at Naples), and up and down the lineup, the whole team made contributions," he wrote, especially pitchers Trevor Rice, Zach Paulino, Jeremy Huller and in his debut on the mound, Mark Bowman, whom he reported registered a win and a save.

He added that the offense mainly was in the hands of Buffington, Rice, Joe Boswell and Kyle Kaus, who delivered the game-winning RBI in two of the victories.

Aviano&#8217;s mound aces are senior Nick Ackett and sophomore Nik Weiser, who are also key contributors at the plate. Josh Pagon and Christian Hall, also loom large on the hill and at the plate, while Myron McRae provides Aviano power.

Whatever happens this week, both teams will have at least one more shot at each other. They&#8217;re scheduled to close out the regular season with a May 22 doubleheader at Aviano before advancing to the European D-II tournament May 27-29 at Ramstein.