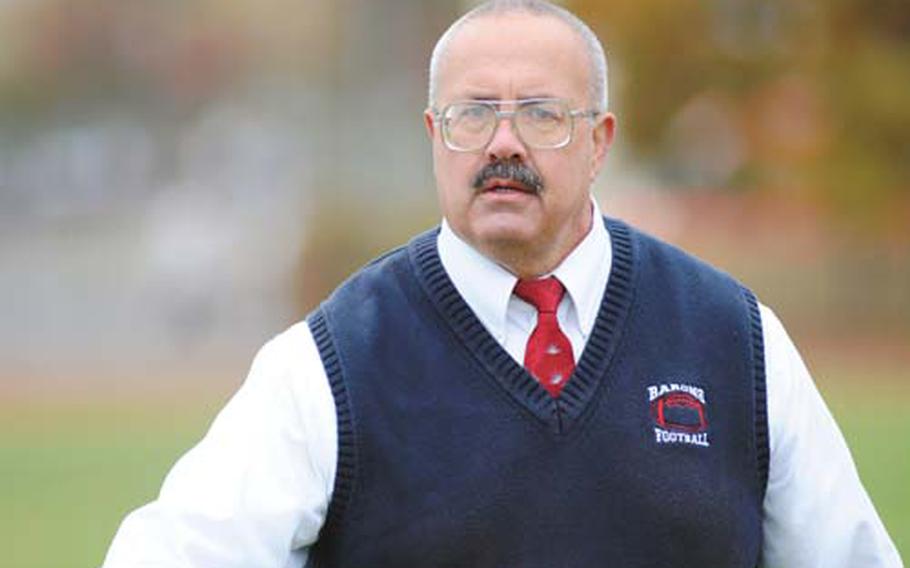 Bitburg coach Mike Laue paces the sidelines, watching his team, during a game in October. Laue turned an 0-2 team into a champion and was voted the DODDS-Europe football coach of the year. (Michael Abrams/S&S)

After his team lost its first two games, the last thing on Bitburg football coach Mike Laue&#8217;s mind was a Division II title, but neither Laue nor his team was ready to give up.

Laue moved some people around on the line and went &#8220;back to basics&#8221; &#8212; adjustments that led to the Barons reeling off six straight victories, culminating with a Division II title over mighty Ansbach.

For his part, Laue was named the European Football Coaches&#8217; Association 2009 coach of the year.

ISB coach Wil Vreudenhil noticed the steps the Barons made between the Raiders&#8217; Sept. 26 victory at Bitburg and the rematch in the Division II semifinal, won 28-12 by the Barons.

The Barons were a different team on defense, too, holding ISB running back Gino Culotta, who was averaging more than 200 rushing yards per game, to 110 yards on 21 attempts.

As always, Laue&#8217;s 2009 Barons lined up in Laue&#8217;s ground-hugging wishbone and emphasized the use of muscle on both sides of the ball.

&#8220;We run the wishbone mainly for personnel reasons,&#8221; Laue said. &#8220;In DODDS, lots of people come and go each year. Some of them have never played before and few of them have much experience playing together.&#8221;

Climate, particularly as exemplified by the dreary rain-slick conditions at Baumholder on Super Six championship Saturday, also plays a part in Laue&#8217;s choice of offense.

&#8220;In the Eifel (mountains, where Bitburg is located), we practice in the rain almost every day&#8221; said Laue, who capped his sixth season at Bitburg with his second D-II crown in the past four years.

The coach noticed something special about his 2009 Barons.

They also were in the perfect system, according to Marcus George of Ansbach, whose team fell to the Barons 19-6 in the title game.

Laue succeeds Brad Shahan of Heidelberg as the EFCA&#8217;s fifth coach of the year. The selection, however, is far from being all his doing, Laue said.