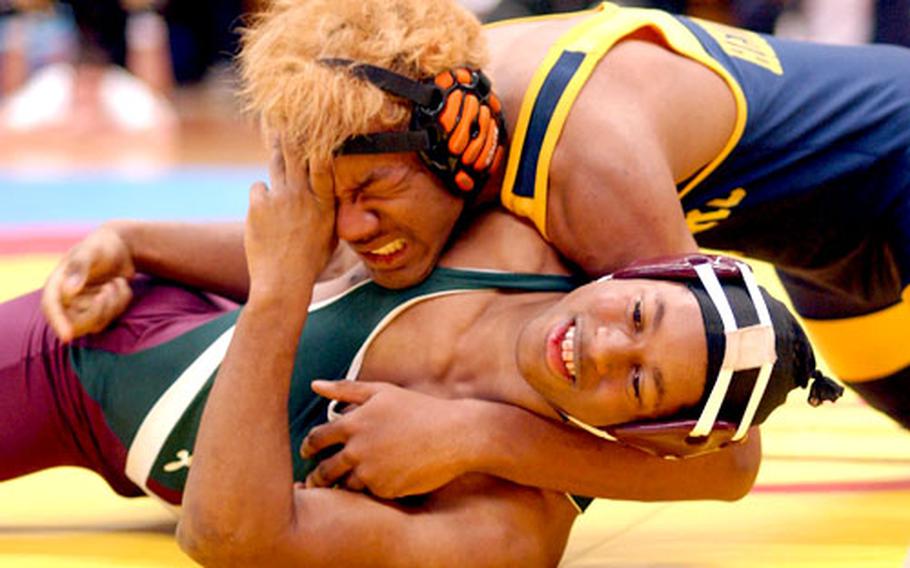 W&#252;RZBURG, Germany &#8212; Heidelberg&#8217;s Michael Cacal pulled the upset of the season, but Division II powers Bitburg and Patch pulled out all the stops by crowning three champions each and finishing 1-2 Saturday in the 11th Wolfpack Holiday Wrestling Tournament.

Cacal narrowly averted a first-period fall at the hands of defending European silver medalist Ryan Butler of AFNORTH in the 160-pound title bout, then caught Butler attempting a reversal and pinned him at 5:22.

&#8220;It feels great to beat him,&#8221; said Cacal, who trailed 5-0 after two minutes, during which he was squirming, flopping and bridging in a desperate attempt to avoid being pinned.

&#8220;Don&#8221; is two-time European champion Donald Walker, a 2003 Heidelberg graduate who wrestles for NCAA Division I Edinboro (Pa.) State. Back in town for the holidays, Walker imparted his experience and expertise to Cacal, his pupil said.

Cacal&#8217;s gutsy comeback made him one of four Division I wrestlers to strike gold Saturday. The others were Tony Gagnon of Wiesbaden, a 2-1 victor over Karl Saucier of Ramstein, and the K-town duo of Tony Althoff at 189 and Chuck Madden at 215, who both won by injury default.

But the victory fit in nicely with Watts&#8217; plans for his senior year.

Patch&#8217;s three champions were familiar faces &#8212; European champions Joe Morrow, wrestling this year at 125, and Josh Anderson, a 135-pounder in 2003-04, along with 275-pounder Brian Bowles. Like the Bitburg champs, all three Panthers won by fall in the final bout.

Anderson, who won his third straight European title in February after coming back from a dislocated elbow that resulted in the only loss of his high school career, showed no ill-effects in pinning Matt Grahek of Ramstein in 1:14 for the 135-pound crown.

Even though he&#8217;s won every tournament he ever entered, Anderson said it&#8217;s still fun to win the Wolfpack.

Especially the Wolfpack, which this season attracted 18 schools and 128 wrestlers, according to meet director Duane Werner.

&#8220;The turnout was excellent,&#8221; said Werner, who now hands the holiday tournament reins over to Dave Izzo of Ramstein. The Royals will host another holiday event on Jan. 3.