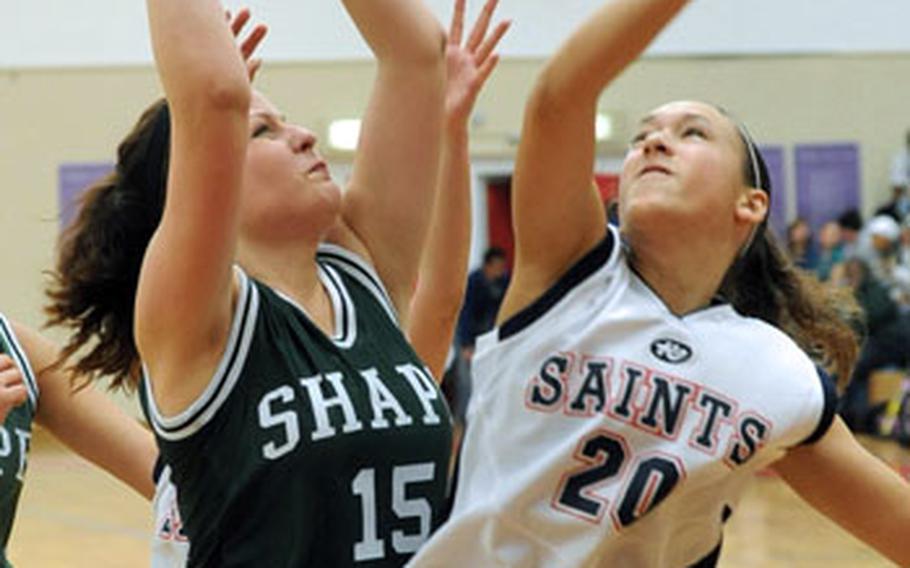 SHAPE&#39;s Liene Bauska attempts a shot over Aviano&#39;s Gabby Aumack in the Division II title game of the DOODS-Europe basketball championships in Mannheim, Germany, on Saturday. Aviano took the crown with a 50-39 victory. (Michael Abrams / S&S)

SHAPE&#39;s Liene Bauska attempts a shot over Aviano&#39;s Gabby Aumack in the Division II title game of the DOODS-Europe basketball championships in Mannheim, Germany, on Saturday. Aviano took the crown with a 50-39 victory. (Michael Abrams / S&S) 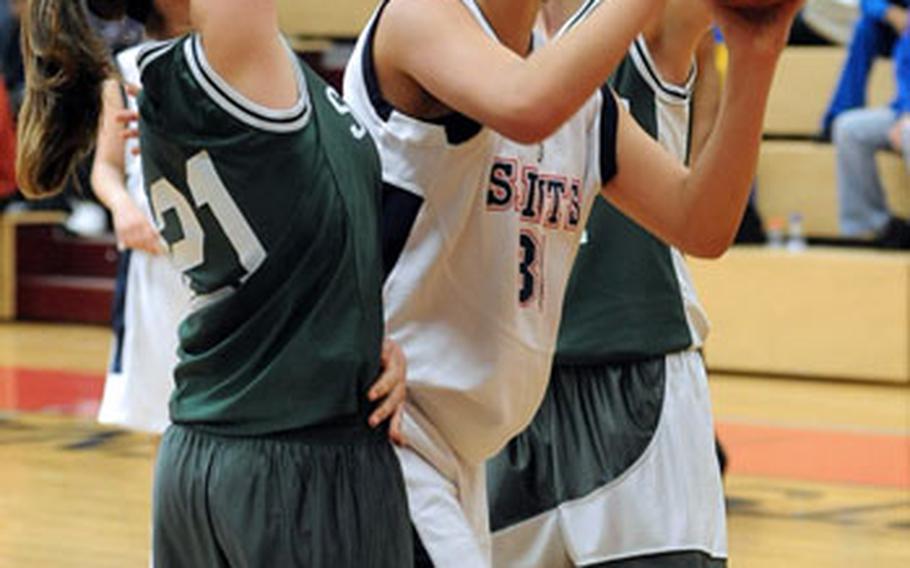 The victory enabled the Lady Saints, who finished the season undefeated and were seeded first in the tournament, to grab the crown that eluded them last year when they lost to Mannheim in the tournament final.

"I&#8217;m so proud of this team," coach Shari McGuire said. "They had a goal, and they took care of business both on and off the court."

Senior Lane, who had 19 points, and freshman Mailoto, who had 20, led the way for the Lady Saints, as they had much of the year. Senior Emily Cartwright also came up big, grabbing nine rebounds to go with six points.

"We all worked together as a team," said Lane. "We worked very hard all season and it paid off."

The game started as a see-saw match between the teams, and at the close of the first quarter Aviano led by three points.

Late in the second quarter, though, Aviano connected on two three-pointers, and that ignited ther offense.

The Lady Saints went on to score 18 points in the quarter for a 30-16 halftime lead.

In the third, Mailoto and Lane dominated down low, making strong passes to each other and streaking down the court to hit easy lay-ups.

But just as it looked as though the Lady Saints were going to cruise to victory, Mailoto fouled out.

Without her inside, the Lady Spartans, led by sophomore Liene Bauska, who finished with 15 points, cut the lead to 10.

Aviano responded by slowing the tempo, passing the ball around the perimeter and keeping the ball out of SHAPE&#8217;s hands.

The strategy worked: Aviano protected its lead as it ate up the final minutes on the clock.

When it became apparent the Lady Saints were going to be crowned champions, tears streamed down freshman Gabriella Dellick&#8217;s face. Smiles and hugs were the more common reaction as teammates grabbed one another in celebration.

McGuire described the victory as sweet, and she wasn&#8217;t referring to the fruit punch the players dumped on her after the game.

"This is awesome," she said. "We dreamt about this ever since we got beat by Mannheim last year."