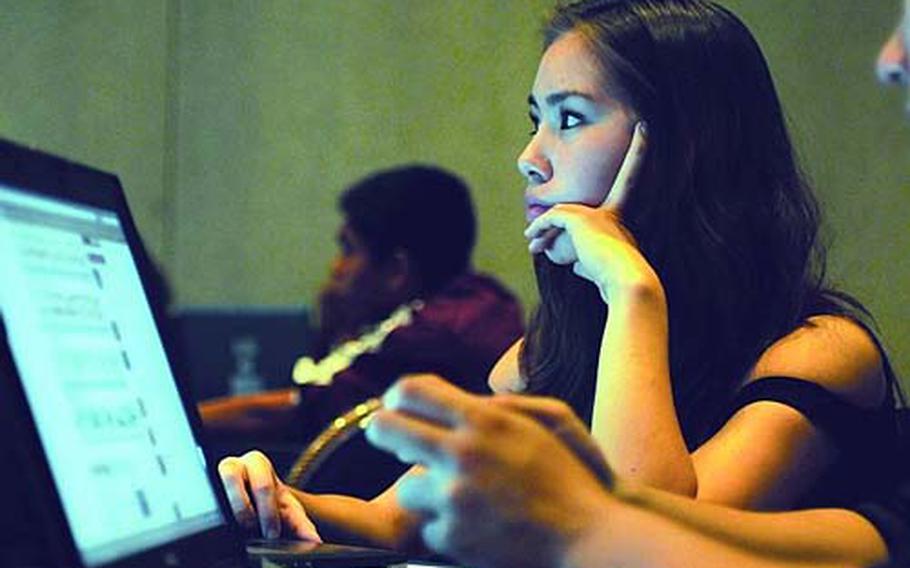 It was Day 1 of the three-day Far East Journalism Conference. And as it unfolded, Wyche, a sophomore yearbook staffer, found part of him was roughly 750 miles west, back at Daegu American, where his Warriors football team prepared for a crucial battle Saturday at Osan American.

&#8220;This is helping me out with my (yearbook) grade,&#8221; said Wyche, a starting safety for the Warriors (5-0). They need only a victory to sweep the season series from Osan and secure host rights to the Far East Class A title game.

Wyche was not alone among students facing divided loyalties and tough decisions. Senior outside hitter Nicole Sparks of two-time defending Class A girls volleyball champion Osan was missing preparation for a Friday battle at Daegu.

Journalism leads that list. It welcomed 113 students, about 40 percent athletes, from 12 DODDS-Pacific schools to the New Sanno.

DODDS students get far more choices than their stateside counterparts at larger schools, where they may be limited to one or two sports and maybe one or two activities. Sparks, for example, also does Junior ROTC, Model United Nations and National Honor Society.

With journalism going high-tech, &#8220;you take away this opportunity from the kids, they miss out on a lot of new things in the business,&#8221; said Zama American yearbook adviser Richard Rodgers, who organized this year&#8217;s conference. &#8220;And the kids still get the yearbook done.&#8221;

Seven of the 19 activities are sports related. Some journalism team organizers felt there&#8217;s a need for more non-sports activities.

&#8220;We need more on the academic and career side,&#8221; said Seoul American journalism teacher David Clausen, who helped found the journalism conference in 1992 and has attended 13 since. &#8220;The more opportunities, the better. And it doesn&#8217;t conflict with other Far East activities.&#8221;

But it does mean missing out on other things. Aside from missing practice, senior backup quarterback Patrick Varner also missed homecoming week at Kubasaki.

At least one athlete didn&#8217;t hesitate. &#8220;I believe in my team and I know they&#8217;re going to do well with or without me, so the choice was pretty simple,&#8221; Perry senior tennis player Andre Bugawan said. His Samurai host E.J. King and Robert D. Edgren this weekend.

Once in Tokyo, there&#8217;s also the problem of staying in game shape during the wide array of workshops, challenges and field trips.

Back home, coaches were carrying on without their scribes.