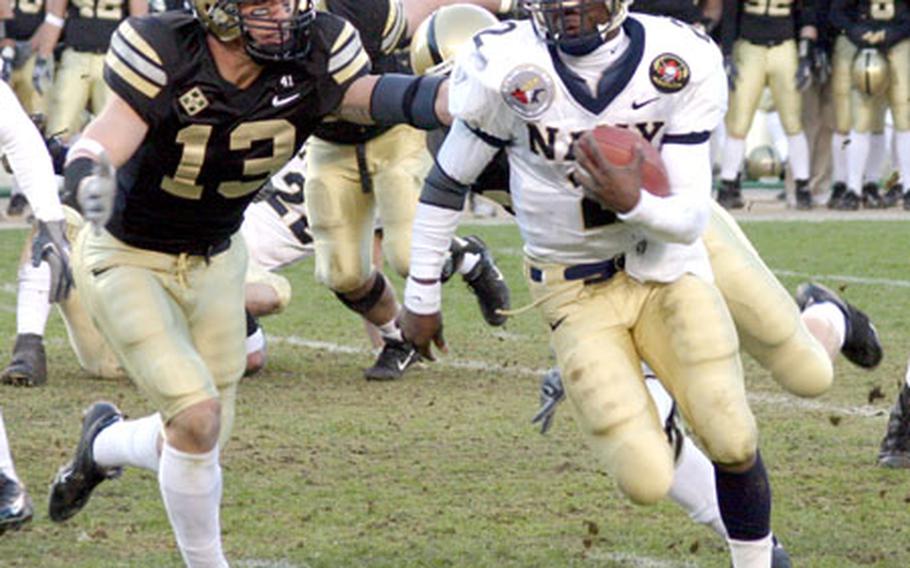 Army defensive back Caleb Campbell pursues Navy quarterback Lamar Owens during the 2005 Army-Navy game at Philadelphia. The Army has decided that Campbell must serve two years active duty before becoming eligible for the Army’s Alternative Service Option, a program that would allow him to split time between his military duties and the NFL. (Joe Gromelski / S&S file photo)

WASHINGTON &#8212; West Point standout Caleb Campbell won&#8217;t be playing football this fall, despite promises this spring that he could pursue a pro career.

Service officials announced a policy revision Wednesday that requires Campbell to serve two years active duty before becoming eligible for the Army&#8217;s Alternative Service Option, a program that would allow him to split time between his military duties and the NFL.

"2nd Lt. Campbell deserves the well-earned recognition he&#8217;s received for his outstanding football career at West Point and subsequent selection by the Detroit Lions," Army spokeswoman Lt. Col. Anne Edgecomb said in a statement. "He has the qualities we expect of our leaders, and is the kind of leader our soldiers deserve."

Campbell told the Oakland Press of Pontiac that he was devastated by the news, which he received on the eve of training camp.

"Oh yeah, I cried, because I wanted a shot," he said. "I can&#8217;t do much about it. I&#8217;m being optimistic about everything, taking it with a smile, having a good attitude about it, disappointed that I didn&#8217;t get my one shot, but that&#8217;s OK because when I went to the academy I initially went to the academy to be an officer."

In April, Campbell was drafted in the seventh round by the Lions, who planned to try him out at linebacker in training camp. At the time, Campbell and NFL officials were told he would be exempt from overseas deployments and reassigned to a recruiting post if he earned a spot on the team.

But days later, Department of Defense officials issued a clarification of their 1994 policy regarding alternative service, emphasizing that it should not include "arrangements typically unavailable to others in uniform."

The Army&#8217;s recent decision mirrors that, allowing soldiers to apply for the alternative service program after two years of active duty.

Lions coach Rod Marinelli told the Associated Press that the news Wednesday came as a shock to the team.

Navy and Air Force officials publicly expressed surprise after the NFL draft that Campbell would be allowed to forgo active-duty service to pursue a pro career.

In June, Navy officials announced that pitcher Mitch Harris must serve a five-year active duty commitment before pursuing a pro baseball career, even though the DOD policy calls for at least two years. Harris was selected by the Cardinals in the 13th round.

Harris told the Associated Press that he was surprised by the Navy ruling because Campbell was being allowed to pursue football while completing his military service as a recruiter and in the reserves.

Campbell was the first Army football player to be drafted since 1997. Two of his teammates, punter Owen Tolson and fullback Mike Viti, were invited to spring mini-camps but failed to land contracts with a professional team.

Campbell&#8217;s first assignment for the service will be as a graduate assistant football coach for the Army, either at the U.S. Military Academy or the service academy&#8217;s preparatory school.